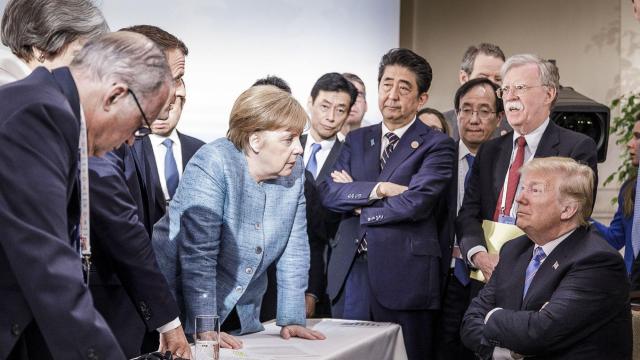 CNN — Tensions in the fraught relationship between Washington and Berlin are spiking again, as Trump administration officials rail against Germany for deporting a terrorist to Turkey instead of extraditing him to the US following a 2015 indictment.

The dispute over Adem Yilmaz, a German-Turkish citizen, led to a tense meeting at the State Department Wednesday, where Deputy Secretary of State John Sullivan called in German Foreign Minister Heiko Maas and Emily Haber, the German ambassador to the US, to air American concerns about the decision to send Yilmaz to Turkey after his 11-year prison sentence was over.

US officials say they were caught "completely by surprise" and expressed frustration about Yilmaz's deportation. They say they're concerned that the Germans are not being proper custodians of the extradition treaty between the two countries and worry that could affect US chances of extraditing two Iranians currently held in German jails.

German diplomats say they wanted a different outcome, but extended delays on the US side led to Yilmaz's transfer to Turkey. They say Washington never provided the assurances needed to comply with German legal restrictions and point to their country's separation of powers.

"We did exchange views," one German official said, referring to the meeting between Sullivan, Maas and Haber. "We explained that the Federal Government cannot influence a court decision. In the end, a security decision had to be made. Most likely, the court would have freed the person yesterday due to the fact that the US has not provided the documents the court had asked for about nine months ago."

Acting Attorney General Matthew Whitaker said the US was "gravely disappointed by Germany's decision" not to extradite Yilmaz for his "complicity in the murder of two American servicemen." He charged that German officials "ignored our pending request to seek judicial reconsideration or review of a German court's recent decision to change the terms of our extradition treaty with Germany."

Whitaker continued in unusually harsh language that Germany "has refused to take any responsibility for failing to extradite him to the United States, has flouted their treaty obligations and has undermined the rule of law."

Not the "happiest meeting ever"

German officials, speaking to CNN, pushed back against the US charges. "We don't like the outcome either, but it's up to the court to decide," a second German official said. "It's very unfortunate. It's not the choice we would have made, but we have to follow the rule of law."

As tensions build, the two sides seem to be talking past each other. A US official said it is "false" that the Department of Justice did not respond to German inquiries about the extradition request, pointing to three letters from the DOJ to Germany judicial officials. The second German official said the US answers didn't meet the German court's requests: "The court asked for information from the US that apparently the US didn't give," the official said.

The first German official said, "it is not like anyone in Germany wanted to decide against the US."

Indeed, in certain US quarters, anger is percolating. The Germans "screwed us," said one State Department official who added that Yilmaz was sent back to Turkey without the US being given advance notice.

The man at the center of the dispute, Yilmaz, had been part of a three-man squad trained by an Al Qaeda linked terror group. They were caught plotting massive bomb attacks against targets that reportedly included Ramstein Air Base, a major US and NATO installation, and Frankfurt airport, one of Europe's busiest transportation hubs.

Yilmaz was arrested in 2007 and sentenced to 11 years in jail in Germany. The US Treasury Department said that if the bombings had been carried out, casualties would have far exceeded the 2004 train bombings in Madrid that killed more than 190 people and injured close to 2,000.

In a 2015 indictment unsealed on Tuesday, the US charged Yilmaz with participating in attacks against US troops along the border between Pakistan and Afghanistan, with providing material support to terrorists and with advising a suicide bomber who killed two US servicemen and injured at least 11 others in Afghanistan in 2008.

The dispute over Yilmaz is the latest point of friction in a bilateral relationship that has frayed badly under President Donald Trump. The US President has criticized German Chancellor Angela Merkel's openness to refugees, decried Germany's trade surplus with the US, particularly its auto exports, and blasted Berlin's pursuit of an oil pipeline with Russia.

Germany, meanwhile, has bristled at Trump's criticism of NATO and Merkel, at his trade policies, his abrogation of the Iran nuclear deal and Paris climate agreement, and his ambassador to Germany's open support for Merkel's opponents.

The failure to deliver Yilmaz looks set to deepen those tensions. The project was a priority of US Ambassador to Germany Richard Grenell, who tweeted Tuesday that "we are gravely disappointed by Germany's decision to deport a dangerous terrorist to Turkey, despite a pending request to extradite him to the US."

"Yilmaz is responsible for the deaths of US troops," Grenell continued. "The decision violates the terms & spirit of our Extradition Treaty."

The US requested Yilmaz's extradition in 2016, but the German court sought more information. It wanted assurances that Yilmaz would only be charged by the US for the crimes listed in the extradition request. German law also forbids extraditing somebody for a crime they have already served a sentence for, the second German official said.

"But at a certain point, the court stopped the process" because it no longer had the authority to hold him, the second German official said. "You can't just keep in him prison." At that point, "local authorities moved to deport him. The alternative, at that point, was that this guy would be freed in October and no one wanted that as he is dangerous."

This official added that "deportation is decided on the state level and the federal government can't interfere in those decisions."

The first German official said, "in our case it was basically the security question: do we want an Islamist to be freed from prison because the process for extradition has been stopped? That was the danger in the past couple of days."

Yilmaz was stripped of his German citizenship before being shipped back to Turkey on Tuesday morning. Department of Justice officials say the US is now likely to press Turkey for extradition.

The second German official, describing the diplomatic fracas as "very unfortunate," said that Berlin would be "looking at whether we could have done something different. Was a mistake made. But," the official added, "it's not that simple."