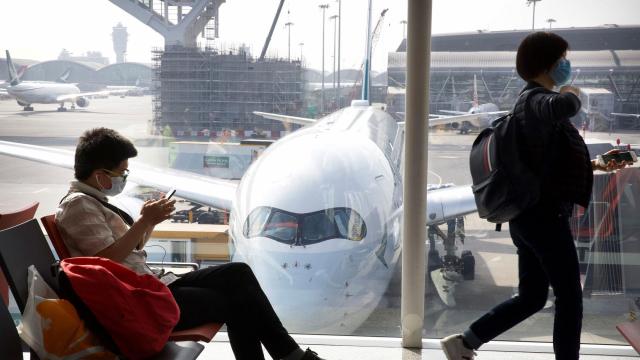 CNN — Shares of Delta, United and American Airlines were all lower Tuesday as investors worried that the coronavirus outbreak in China could affect global air travel.

The outbreak is in the Chinese city of Wuhan in the Hebei province. Six people have reportedly died from the disease, which can cause pneumonia-like respiratory problems.

Last year, more than 60,000 passengers flew into the United States from Wuhan, a city 700 miles south of Beijing. That's about 1% of airline passengers who flew from China or Hong Kong to the United States, according to the most recent annual data from the Bureau of Transportation Statistics. Any slowdown to and from Wuhan would have limited impact on airline travel.

But the concern is that the disease, which is similar to SARS, could spread and affect travel to and from a much wider part of China and even the rest of Asia, perhaps even reaching other continents.

More than 100 staffers from the US Centers for Disease Control and Prevention are already being deployed to three US airports to check passengers arriving from Wuhan, China, for fever and other symptoms of the disease. It is a relatively rare step that was previously taken only during the 2014 Ebola outbreak, according to a CDC official.

Travel between the US and China was already affected in recent months by the protests in Hong Kong, which have been a drag on airline stocks. United, which reports fourth quarter numbers after the bell Tuesday, warned investors that it will take a $90 million charge for issues related to the temporarily suspended flights between Chicago and Hong Kong last fall.

The airline said there was reduced demand for travel on that route. At the time, Hong Kong was in the third month of mass demonstrations, although the United did not cite that as a reason for the suspension. United has since resumed that route.

Shares of United were down more than 3% in morning trading Tuesday, while shares of Delta and American each fell nearly 2%. Even shares of Southwest, which doesn't serve Asia, were slightly lower Tuesday on fears about the impact on air travel overall.

And it wasn't just airline stocks being hit.

US casino operators that own properties in Macau, China, were also sharply lower on what the outbreak could mean for their Asia businesses. Wynn Resorts and Las Vegas Sands were both off nearly 5%, while MGM Resorts International shares fell 4%.