Vowing crackdown on Russian meddling, US sanctions Ukrainian lawmaker who worked with Giuliani to smear Biden 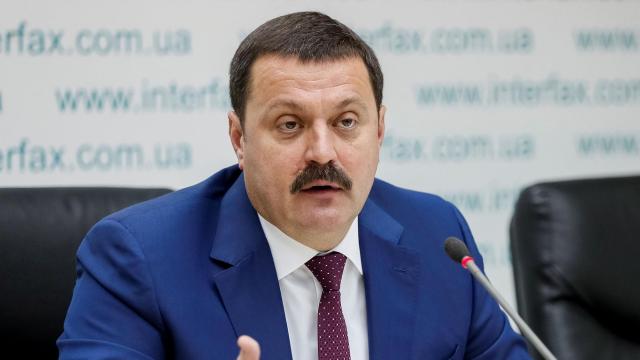 CNN — The US Treasury Department on Thursday announced new sanctions against a Ukrainian lawmaker, accusing him of being an "active Russian agent" who is part of Moscow's interference in the 2020 campaign.

Now, Derkach has been explicitly labeled a Russian agent by the US government and sanctioned for attempting to influence the upcoming election.

"Andrii Derkach and other Russian agents employ manipulation and deceit to attempt to influence elections in the United States and elsewhere around the world," Treasury Secretary Steven Mnuchin said in a statement Thursday, which was included in a Treasury announcement that said Derkach "has been an active Russian agent for over a decade" and maintained "close connections with the Russian intelligence services."

"The United States will continue to use all the tools at its disposal to counter these Russian disinformation campaigns and uphold the integrity of our election system," Mnuchin added.

The announcement on Thursday was an extraordinary step by the US government to publicly condemn Russia's ongoing interference in the 2020 election. It shows how some parts of the US government are cracking down on Russia's anti-Biden meddling, while Trump has openly embraced the Russian effort and hasn't spoken out against it.

The news also raises the stakes for Giuliani, who collaborated with Derkach to spread anti-Biden material during Trump's impeachment. The Treasury statement now means Giuliani collaborated with "an active Russian agent," which is precisely the type of behavior that led to allegations of Trump-Russia collusion in the 2016 election. Asked about the news, Giuliani texted CNN, "Who cares."

The Treasury Department said Derkach has waged a years-long "covert influence campaign" that centered on "cultivating false and unsubstantiated narratives concerning US officials in the upcoming 2020 Presidential Election."

Derkach has been added to a list of Specially Designated Nationals, meaning his assets have been blocked and "US persons are generally prohibited from dealing with them," according to the Treasury Department.

Derkach is among a small group of Ukrainian political figures who have, over the past year, injected themselves into the 2020 election by promoting dubious claims of corruption against Biden and releasing alleged audiotapes from Biden's diplomatic work as vice president.

He has worked closely with Giuliani to peddle anti-Biden material, much of which has also been embraced by Republican lawmakers and right-wing outlets like OANN, according to CNN reporting and Derkach's public statements.

Treasury's announcement didn't mention Giuliani or OANN by name, but did say Derkach targeted "prominent US persons" and used "US platforms" to spread his message.

Derkach did not immediately respond to CNN's requests for comment on Thursday.

The recordings are of Biden's dealings with Petro Poroshenko, the former Ukrainian President, and they appear authentic.

The material reinforces Biden's claims that he promoted US interests and didn't do anything improper in Ukraine. There is no proof of wrongdoing on the tapes, and the Biden campaign maintains that these releases are blatant Russian meddling against the former vice president.

Derkach's role in the Russian meddling operation began "at least in late 2019," during Trump's impeachment inquiry, and continued through the middle of this year, when he started releasing the audiotapes, according to the Treasury statement.

Derkach was involved in "false and unsubstantiated narratives" about US officials, the statement said, a clear reference to Biden, though the news release didn't mention anyone by name.

Just over one week after the intelligence community's statement, Trump retweeted a post containing Russian propaganda that contained material released earlier this year by Derkach. Trump has repeatedly refused to acknowledge Russia interfered in the 2016 election to help his campaign, an assessment long confirmed by US intelligence agencies and the Senate Intelligence Committee.

"Remarkably, even as the Treasury Department acknowledges Derkach has been an active Russian agent with close connections to the Russian Intelligence Services, and identifies the narrative that he is promoting as 'false and unsubstantiated,' the President of the United States continues to push out the same false claims and smears," Rep. Adam Schiff, the Democratic chairman of the House Intelligence Committee, said in a statement Thursday.

Democrats have also charged that Derkach sent information to both Senate Homeland Security Chairman Ron Johnson and Rep. Devin Nunes, Republicans who have pushed for investigations of Biden and embraced dubious claims about his Ukraine dealings. Johnson has denied receiving anything from Derkach, accusing Democrats of themselves spreading Russian disinformation with the allegation.

Nunes has declined to say publicly, or when pressed privately by Democratic lawmakers, whether he has accepted information from Derkach.

Last week a group of Senate Democrats sent a letter to Mnuchin urging him to sanction those who are meddling in the 2020 US elections after the intelligence community's statement.

The three Russian nationals who were also sanctioned Thursday -- Artem Lifshits, Anton Andreyev and Darya Aslanova -- work for the Russian troll factory known as the Internet Research Agency (IRA), according to the Treasury Department.

Federal prosecutors on Thursday also announced criminal charges against Lifshits, accusing him of opening fake bank accounts to help finance the Russian meddling operation. He is believed to be in Russia and CNN couldn't locate him to seek comment.