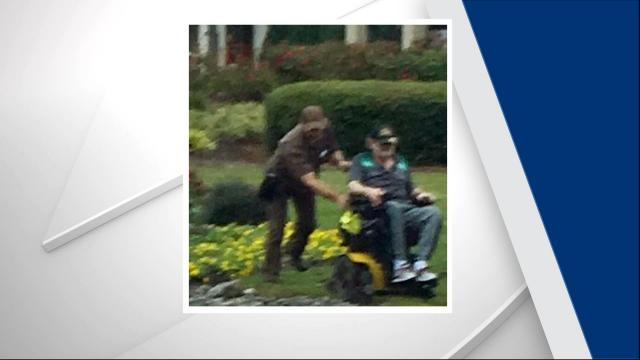 Southern Pines, N.C. — A UPS driver is being praised after his act of kindness was caught on camera by a passing driver in Moore County.

Dot Brower said she was driving through the Pinecrest Plaza Shopping Center in Southern Pines on Nov. 2 when she noticed the UPS driver had stopped his truck and was running down a grassy hill in the rain.

The driver, Brower said, had left his truck to help a man whose electric wheelchair had become stuck in the soggy ground.

“I just had to take the picture,” Brower told the Sandhills Sentinel. “I was just struck by the action of the driver as he ran to help. He not only got the man unstuck, he pushed him all the way up the driveway into the parking lot until he found a safe place to stop.”

Brower shared the picture on Facebook, where somebody recognized the UPS driver as Aaron Oldham.

Oldham told the Sandhills Sentinel that the man seen in the wheelchair, Norman Stokes, lives along his route, and he has helped him once before.

“That time, his chair was leaning to the side, and the battery had died from trying to get out, and no one stopped to help. I couldn’t leave him,” Oldham said.

Stokes said he not drive his motorized chair on the roadway because he has been hit by a car in the past. He was on the way to the pharmacy and was trying to free his chair from the mud when Oldham arrived to help.

“The driver was such a kind man to me. He came running down the hill to me, and said he was going to get me out of there. I am so grateful for what he did. Maybe one day, they will put in a sidewalk for folks like me. It is the only way I have to get groceries and go to the pharmacy,” Stokes said.

Oldham has been with UPS for 24 years and has been a driver for five years. Stokes said he will be keeping an eye out for Oldham’s truck in the future, so he can express his thanks.