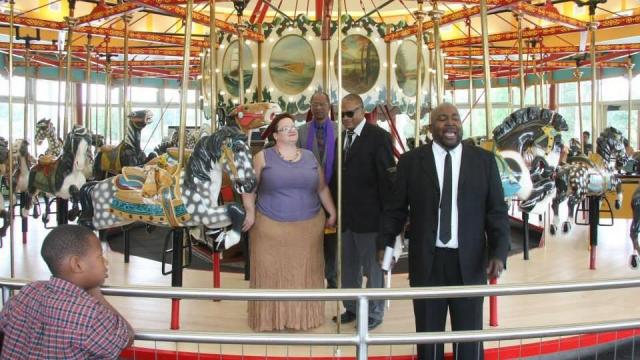 Raleigh, N.C. — Generations of Raleigh's children are familiar with the whimsically historic carousel at Pullen Park. The Pullen carousel is a menagerie of hand-carved horses, ostriches, pigs, rabbits, a tiger, a lion and a goat – all of which date back to the early 1900s.

Fewer locals are as familiar with the city's sister carousel at Chavis Park – a remnant from an era before the Civil Rights Movement.

"Thirty-six hand-carved, hand-painted horses – all jumpers – carry revelers around and around on the Chavis Park Carousel, a gem in the WPA-era park built for African Americans in segregated Raleigh," reads a description of the carousel on the Raleigh Historic Development Commission's website.

Built in 1913, the Chavis carousel is arguably every bit as wondrous, artful and historic as Pullen's carousel. In fact, with fewer than 300 such carousels remaining in the entire country, it seems incredible that Raleigh is fortunate enough to have two of these playful relics.

However, there is no question that the Pullen carousel has become a renowned Raleigh icon – while many locals have never ridden the equally-marvelous Chavis carousel.

Lori and Tim Truzy, who got married on the Chavis carousel, said some of their fellow church members that grew up in Chavis Heights remember a time when the park thrived.

Chavis mimicked Pullen Park in many ways, right down to the popular historic carousel, swimming pool and miniature train ride around the park. Despite the two parks being virtual mirrors of one another, Pullen Park is typically seen as the more well-known of the two. 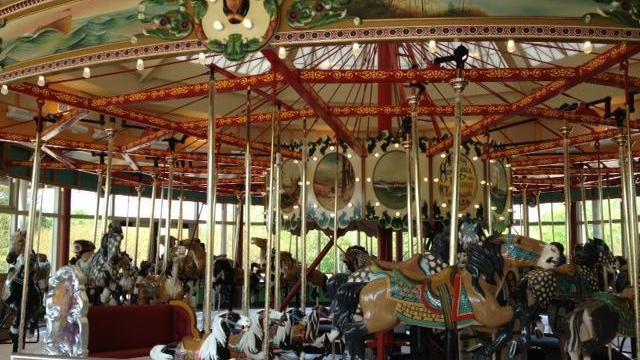 But during its early years, Chavis Park had an estimated 2,000-3,000 visitors on a good weekend, according to the Landmark Designation Report for the Chavis Park Carousel, written by Ruth Little. Visitors came in busloads from cities around North Carolina, including Greensboro, Wilmington and Rocky Mount.

She wrote, "The park was the center of Black sports in Raleigh."

In a 'broader civil rights context,' Chavis Park was a "major meeting ground for Black folks, not only from South Park, but from all over Raleigh, all over the state," according to Rev. Forbes.

"During the summer, there must have been thousands of people at Chavis Park because it was one of the nicer parks for Black people. People would bring picnic baskets, and we were one of the few cities in the state that had a carousel and swimming pool, and later on a train, that the kids used to ride in," he said. 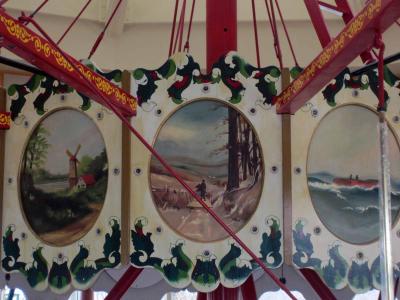 Chavis Park was built in 1937, in the midst of segregation, near Shaw University, a historically black college. Its historic No. 2, Special Three Abreast, Allan Herschell Carousel had a Wurlitzer band organ just like Pullen's.

Pullen Park was built in 1887, decades earlier, as the first public park in North Carolina – and one of the oldest in the entire world, according to the City of Raleigh's website. The carousel, however, didn't come to Pullen Park until around 1921. The historic Dentzel carousel first appeared at Bloomsbury Park, a trolley park run by CP&L at the end of the Glenwood Avenue trolley line. 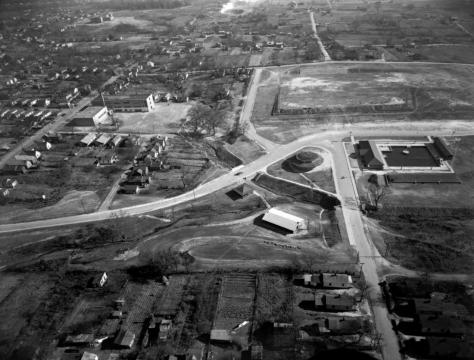 However, in the 1970s, a lack of investment in Chavis Park caused the memorable childhood wonder to fall into disrepair. Even the miniature train installed in the 1950s to serve as a segregated contemporary to Pullen's train ride was removed in the 70s.

The adjacent segregated public housing community, Chavis Heights, began to equally struggle, as gentrification threatened it from the outside.

For years, the park and surrounding community shared a similar fate.

Decades later, it would be this connection to Chavis Heights that encouraged Lori and Tim to hold their wedding on the very carousel that was tied to the community's history. 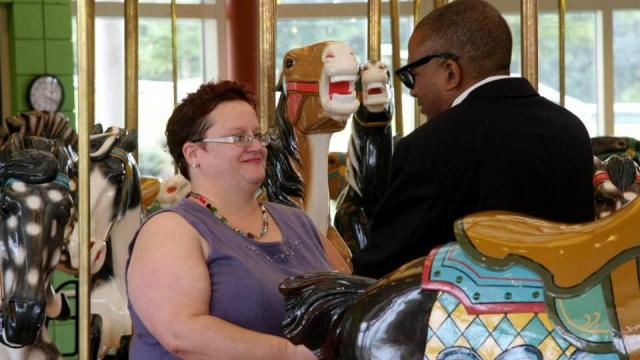 The ups and downs of history: Marriage on a carousel

The story of the Chavis carousel and community is a large part of why Lori and Tim Truzy were eager to get married on it.

Lori describes herself as a white woman who is physically handicapped and uses a wheelchair. Tim describes himself as a Black man who is blind.

"Our photographer was hearing impaired, and our son has dyslexia," said Lori. "It was kind of a disabilities convention!"

The couple said that Chavis Heights, being in a Black community, also honored Tim's heritage.

"Classic style of the old tradition, we didn’t invite many people to the wedding – but somehow the church found out and all of the sudden my whole church was there," said Tim.

Instead of a first dance, the couple had a first ride.

"We tried to get a 'first kiss' photo while riding, but Tim is totally blind. So we had lots of practice trying to get that picture," said Lori.

The Chavis carousel's off-the-beaten path history and magic is a large part of why Lori and Tim considered it a perfect location to symbolize their union. After all, they said, they are a couple who understands the ups and downs that life can throw your way. 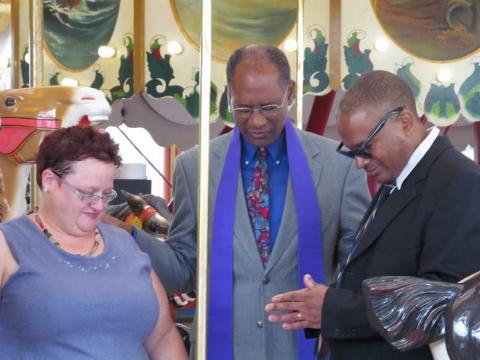 "We’ve lived long enough to understand that you’re going to have highs and lows in any relationship. Life goes around again. Sometimes you may come back to what you think you’d left behind," said Tim.

For the Chavis carousel, life has started to come back around.

"The Raleigh parks employee said people seldom go to that carousel," said Tim. "It surprised me! They said it's still one of the most underutilized facilities in the Raleigh parks."

While some parts of Chavis Park that have been lost to history, such as the beloved pool and train ride, are still mourned by the community, Chavis Park has begun putting more focus into protecting and preserving the historic carousel.

Perhaps, with enough love stories of wedding carousel rides and more locals bringing a new generation of children to make memories at Chavis as well as Pullen, the carousel could once again see a heyday.

As for Tim and Lori – their wedding photos breathed new life into a carousel with a rich and beloved history.

"We can always go up from there," said Tim.