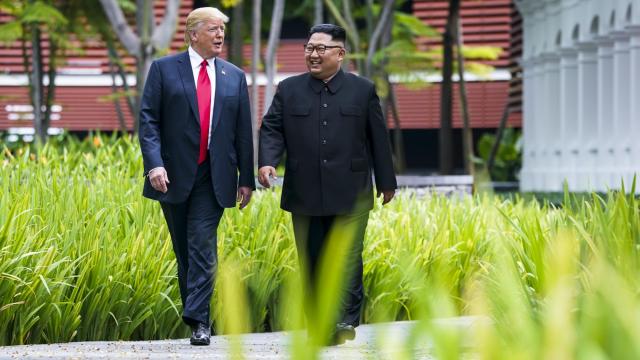 SINGAPORE — The president of the United States pulled out an iPad and showed the leader of North Korea a slick, Hollywood-style trailer presenting the North’s possible future.

There were images of fighter jets and missile launches cut together with shots of dancing children, pictures of artisanal pizza and time-lapse sunrises over skyscrapers.

This was no ordinary summit.

Then again, no one really thought the historic encounter between President Donald Trump and North Korea’s leader, Kim Jong Un, was going to be just any encounter.

The meeting between these two figures — one a former reality television star and the other a dictator who has tortured and imprisoned thousands of citizens, and ordered executions, including of his own uncle and half brother — was expected to include lots of theatrics.

The video came complete with an ominous voice-over and a swelling soundtrack as it described Kim’s choice without mentioning nuclear weapons or sanctions relief: He could “shake the hand of peace and enjoy prosperity like he has never seen,” or slide back into “more isolation.”

Before the meeting, Kim posed for a selfie with Singapore’s foreign minister, as if he were a fraternity brother blowing off his senior thesis for a night on the town.

During the meeting, Trump let Kim peek inside the Cadillac presidential limo known as the Beast, and for a second it looked as if Kim might climb inside.

And before the signing ceremony, a North Korean official wearing latex gloves appeared to clean and inspect a pen meant for Kim. No White House aide performed a similar service for Trump.

Although the declaration that emerged from the meeting did not substantively advance efforts to denuclearize North Korea, the symbolism of the meeting was enormous.

For Kim, it was North Korea’s de facto legitimization on the international stage, a masterly propaganda coup for his isolated state.

For Trump, it was a chance to claim his place in history, as the first sitting American president to meet a North Korean leader.

Even though the two countries do not have formal diplomatic relations, all of the pageantry pointed to a meeting between near equals — from the row of American and North Korean flags that stood behind the leaders as they first met, to their joint entrance into the room where they signed a declaration.

The optics of Trump shaking Kim’s hand, smiling and describing a “very special bond” between them, was in sharp contrast to Trump’s appearance at a bruising Group of 7 meeting in Canada just days earlier, where Trump lashed out at America’s closest allies.

Kim’s meeting with Trump, on the resort island of Sentosa off the southern tip of Singapore, also had a decidedly different flavor than Kim’s first meeting in April with President Moon Jae-in of South Korea at Panmunjom, the border between the two Koreas.

That closely watched encounter, which in many ways set the stage for the Singapore meeting, was expertly choreographed, with numerous images of harmony and lighthearted banter between the leaders.

The stagecraft of Trump’s encounter with Kim did not appear to be as sophisticated. But there were plenty of riveting scenes, including several clearly spontaneous moments that heightened the drama.

Just after Trump and Kim took a brief stroll after lunch came Kim’s chance to check out the Beast. Kim’s aides stopped him from getting inside.

And as the pair retreated to a breezeway encircling the Capella Singapore hotel, they huddled with advisers, including John Bolton, Trump’s national security adviser, and Kim Yo Jong, Kim’s sister.

For several minutes the group looked confused about where they were supposed to go next, with Bolton appearing particularly agitated over Trump’s shoulder. The summit’s drama had begun the night before, when Kim emerged from his hotel after a day of seclusion and went on a sightseeing tour in Singapore.

On the way up to view the Singapore skyline from the roof of the Marina Bay Sands, a hotel owned by Trump supporter Sheldon Adelson, Kim waved jovially at bystanders. Then he took the selfie with Singapore’s foreign minister, Vivian Balakrishnan.

It was yet another sign that the 34-year-old Kim is continuing to mount a charm offensive, trying to showcase a softer side.

On the morning of the summit, the day started, predictably enough, with a storm of tweets from Trump, who lashed out at “haters & losers” and declared, “We will be fine!” Just over 20 minutes before he was to meet Kim, presumably after he was already on Sentosa, he broke the shocking news that his top economic adviser Larry Kudlow had suffered a heart attack.

Trump’s motorcade passed through barricaded roads and crossed the flower-lined bridge onto Sentosa about 15 minutes before Kim.

But Kim entered the hotel first. Although he is revered as a near deity at home, he is still less than half Trump’s age, and in Korean culture, respect comes with age. The person who enters a site last is also the one with the higher status.

For their first handshake, the two walked toward each other from two sides of a colonnaded breezeway, meeting on a red carpet in front of the lineup of six flags from each country. Just as he had in his meeting with Moon in Panmunjom, Kim wore an austere black Mao-style suit. Trump wore a black suit and red tie, an American flag pin on his left lapel.

The body language of the leaders suggested that Trump had assumed the role of elder statesman.

His hand shot out first to shake Kim’s hand — although he appeared to avoid the kind of heavy pumping action he has displayed with other world leaders — and he patted Kim, who looked nervous, on the arm.

Several times throughout the five-hour meeting, Trump put an avuncular hand on the small of Kim’s back, although as the pair left the signing ceremony, it was Kim whose hand reached for Trump’s back.

When they moved to a room to have photographs taken before their one-on-one meeting just with interpreters, Kim greeted Trump in English. “Nice to meet you Mr. President,” he said, and after another handshake, Trump gave him a quick thumbs up.

A brief diversion from the wall-to-wall focus on the meeting came when Dennis Rodman appeared on CNN for an interview in which he advised Trump to be “really emotional” with Kim.

When the leaders joined an expanded meeting that included advisers on both sides, those watching in South Korea and the United States were surprised to see Bolton at the table, given that his remarks comparing North Korea to Libya had prompted the North to threaten to cancel the meeting last month. Missing on Kim’s side was his sister, Kim Yo Jong, who had sat with him when he met with Moon.

Trump’s one clear effort at humor fell awkwardly. As he and Kim entered the dining room for a lunch that included beef short rib confit, sweet and sour crispy pork and oiseon, Korean stuffed cucumber, Trump gestured to the cameramen in the room.

“Getting a good picture everybody?” he said. “So we look nice and handsome and thin? Perfect.”

It was impossible to know whether the clenched look on Kim’s face was his reaction to the quip.

Shortly before the signing ceremony, the faces of two visibly jumpy North Korean minders loomed on television screens as they appeared to push back at the cameramen who were lined up at the back of the room.

With cameras flashing, the two leaders marched into the room side by side through double doors.

After the signing and brief remarks from both leaders, the two moved quickly back to the red carpet where their meeting had begun. This time, Trump’s handshake looked more vigorous. Kim glanced over his shoulder as if eager to leave.

He walked off to his waiting aides, and Trump was left alone on the stage.