United warns 36,000 employees they may be furloughed this fall 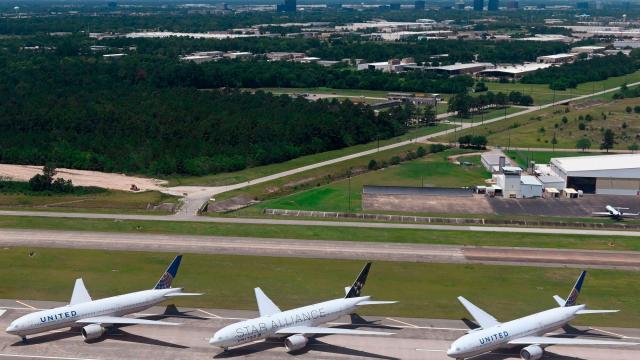 CNN — United Airlines is warning nearly half of its frontline workforce that they could be furloughed this fall.

The Wednesday announcement paints a grim picture for an air travel recovery only days after United announced it would ramp up its schedule in August. But as the pandemic worsens in some areas of the United States, bookings have once again started to tumble.

United has warned for months that it would cut thousands of jobs if travel does not pick up before October. So far, airline workers have been largely insulated from the job losses that have wracked other industries. The federal CARES ACT, enacted in March, offered billions of dollars in bailout funds to the industry and barred companies that accepted the money from cutting jobs, pay rates or involuntarily furloughing workings.

That prohibition lifts on October 1.

Notices were sent to employees Wednesday because federal law requires employers to notify workers 60 days before a mass layoff.

The airline is operating only a quarter of flights compared to last year, a company executive said Wednesday, and those flights are, on average, 55% full. "Involuntary furloughs that we worked so hard to avoid are now the last option left," the executive said.

The president of the Association of Flight Attendants-CWA, which represents 50,000 flight attendants at airlines including United, called the furloughs a "gut punch." But, "they are also the most honest assessment we've seen on the state of the industry," the union president, Sara Nelson, said in a statement.

"This crisis dwarfs all others in aviation history and there's no end in sight," Nelson said. She called on Congress to extend the CARES ACT in order to save hundreds of thousands of airline jobs and "extend it and expand it for all working people."

United previously disclosed in a presentation to employees that it would be sending layoff notices this month.

"Just because you receive a WARN notice does not mean your job is being eliminated," United told its workforce at the time. "However it is a sign that your job could be affected by an involuntary furlough."

United insists it's done everything it can to avert layoffs. Tens of thousands of employees took voluntary unpaid leave as the company began urging workers to do so.

Last month, the company mortgaged its frequent flier program for a bank loan, and at the time the company said between that money and the federal bailout funds it would have $17 billion in cash on hand by the end of September, roughly three times the normal amount of cash it carries.

United and all the other major US carriers also applied for a new round of loans made available under the CARES Act, the Treasury Department announced Tuesday.

The airlines already received $25 billion in aid from the first part of the act. This new round of loans could end up totaling another $25 billion, and the airlines have until September 30 to decide to close on the new loans. Delta, Southwest and United had said Tuesday that they have yet to make a firm decision on whether they will need the additional federal help.

The airline says it's hemorrhaging $40 million each day.

The United executive also said the company is not confident lawmakers will pass another round of support in this election year, but that company and union officials are engaged in conversations with DC.