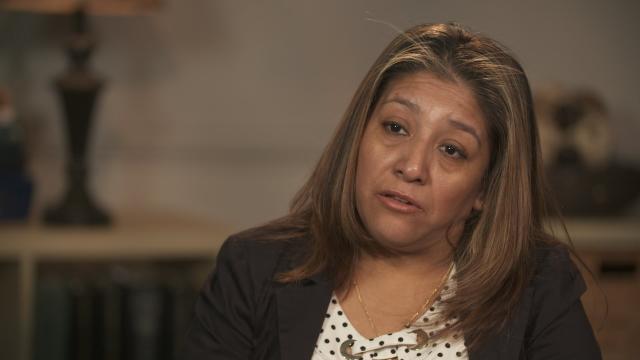 CNN — The last time Victorina Morales and Sandra Diaz were in the same room as Donald Trump they were cleaning his residence at Trump National Golf Club in Bedminster, New Jersey.

On Tuesday evening, the two women, both of whom were undocumented when they worked for Trump, will be seated in the House gallery watching their former boss deliver the State of the Union.

The pair will be guests of Democratic lawmakers looking to draw attention to the gap between Trump's rhetoric on undocumented immigrants and the hiring practices at his clubs.

"It's an honor," said Diaz, who is now a legal resident, on being invited to attend the address.

After the speech, she said she had mixed feelings. "Very sad that he doesn't change his position but happy that we're there to tell the truth, to remind him of those who work for him," she said.

"I'm happy, I feel free because now I can fly. I know it's a long road and we have to fight," Morales said. "There's still a lot to do."

Earlier in the evening, Morales described when she got the call to attend the State of the Union. "I never imagined that I'd be in a place like that one," she said, referring to the House chamber. "I'll never forget that moment."

Reps. Bonnie Watson Coleman, a member of the House Homeland Security Committee, and Jimmy Gomez invited Morales and Diaz, respectively. They met with the lawmakers, along with Arizona Democratic Rep. Raul Grijalva, a few hours before the address.

"It's a way to highlight the issue," Watson said in a meeting. "But it also gives people the chance to see the face of immigration." Morales, seated next to Watson, was overcome with emotion.

Trump is expected to make immigration a focal point of his address Tuesday, as he urges Congress to fund his signature border wall. The President has railed against the nation's immigration system, deeming it inadequate to address the migrant flow from Central America, and falsely claiming that immigration is a driver of crime.

That doesn't faze Morales. She told CNN she's wearing a white blouse to represent the light. "I can see the light, I'm out of the hole that I was in," she said.

Morales' story has shot across the country since she came forward in December 2018 in the New York Times. Over the course of five years, the former housekeeper tended to Trump's residence -- washing his clothes, making his bed and scrubbing his toilets. But an increasingly hostile environment since Trump's election, as well as what she describes as abuse by her supervisor, put her over the edge -- and as a result, inspired to share her story publicly.

Since leaving her job, Morales -- who is from Guatemala -- has pushed for immigrant rights and sought protection from deportation from members of Congress. She's not alone.

"There has to be blanket protection," Grijalva said.

The Trump Organization has come under fire for having hired undocumented workers. The Washington Post reported that at least 18 undocumented workers from five golf courses in New York and New Jersey have been dismissed over the last two months. Eric Trump, the President's son, confirmed the firings to the Post.

The Trump Organization said in a statement to CNN that the company would institute "E-verify at all applicable properties and will continue to take swift and appropriate action where necessary." Trump's golf clubs in New Jersey and New York had not been participants in the federal E-Verify system, which is designed to help employers confirm that applicants are legally permitted in the US.

The statement said the company "initiated a comprehensive review of employee eligibility across all of our properties" last month after reports about undocumented workers and fired employees who had "provided falsified documents."

"Obviously, terminating one's employment is never something we wish to do," the statement read. "Many of our employees have been with us for years and are an extension of our family. Still, after being confronted with this issue, we had no choice."

The descriptions the former employees at Trump's golf clubs gave about how they obtained their positions are similar: They came in, provided paperwork and were asked to come to work almost immediately after. In the Morales' case, the managers allegedly helped her in obtaining phony documents.

Gabriel Sedano, a former maintenance worker at Trump's golf club in Westchester, told CNN he began working for the club in 2005 and was always treated well. He was discouraged by Trump's rhetoric during the 2016 campaign, and expected there might be a wave of change after Trump was elected, but nothing happened. Sedano was among about a dozen employees at the club in Westchester who were fired over their work status on January 18.

Anibal Romero, a New-Jersey based lawyer, is now representing 25 workers who are, or were, undocumented during their employment at Trump's golf clubs -- up from 20 a few days ago.

"It isn't illegal to work in the US, but it is illegal to knowingly hire undocumented immigrants and then [for] supervisors to physically assault them, threaten them with deportation," he told CNN last month. "We need a complete, thorough investigation."

Morales and Diaz are part of a WhatsApp group with the other workers that Romero is representing. They support each other and, in instances like Tuesday, send best wishes.

Morales and Diaz maintain they're confident -- not afraid -- to come face to face with their former employer. And even though they don't agree with Trump's politics, they respect his office, Diaz said.

"I respect him, even if I don't share his ideas," Diaz said.