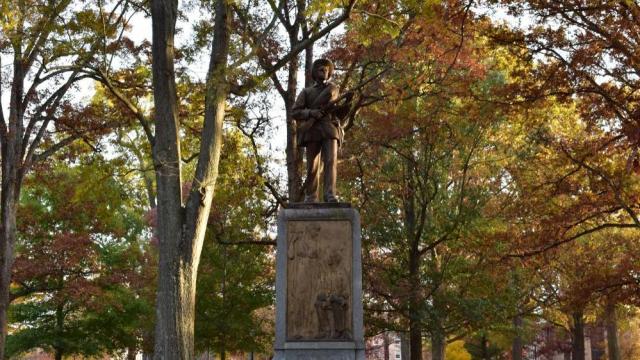 Chapel Hill, N.C. — A civil rights group has filed a series of motions on behalf of University of North Carolina students and staff to block a $2.5 million settlement using university funds to preserve a Confederate monument.

The UNC system announced in November that a statue commonly known as "Silent Sam" will be given to the North Carolina Division of the Sons of Confederate Veterans along with a $2.5 million charitable trust after the group sued the system over its removal of the monument, according to a news release.

The monument was pulled down by protesters in the midst of controversy over Confederate statues in 2018.

The Lawyers' Committee for Civil Rights Under Law announced on Tuesday it filed to appeal a denial of their motion to intervene in the case and stay the distribution of the funds, according to a statement from the organization.

The case, brought by three UNC law students, two UNC undergrad students and a faculty member, argued that the university system's board and the Confederate descendants' organization worked together to "misrepresent issues critical to the court's jurisdiction" and that intervention in the case would provide necessary opposition.

They asked to maintain the status quo until the North Carolina Court of Appeals could review the case, according to a statement Tuesday.

"What I find frustrating about the decision to deny our motion to intervene is that this places the university in a position where they will be working with the Sons of Confederate Veterans. . . rather than allowing the university to work with us and stand together in defense of the interests of all students," said UNC-CH sophomore De'Ivyion Drew, one of the intervenors.

The "Silent Sam" monument, a bronze statue of an anonymous Confederate soldier with a rifle in hand, was previously located at UNC-Chapel Hill. The statue became controversial in recent years and drew protesters from both sides of the debate around Confederate monuments.

In 2015, North Carolina passed a law preventing the removal, relocation or alteration of state-owned monuments, such as Silent Sam, but three years later protesters pulled it down themselves.

Because of public safety concerns, former Chancellor Carol Folt said the monument could not be returned to its previous mount.

The university previously planned to build a $5.3 million indoor facility on campus for the statue, but the plan was not approved.

The university now agreed to a $2.5 million trust using non-state funds to upkeep the monument and "potentially a facility to house and display the monument," the release stated.

Though it's not stated where exactly the statue will go, the settlement states that the statue cannot be located in any of the 14 counties containing a UNC system school.