Chapel Hill, N.C. — A student was arrested along with other protesters when about 800 people gathered at McCorkle Place on Tuesday night to demand the removal of the Silent Sam Confederate statue from the University of North Carolina at Chapel Hill campus.

The statue was surrounded by two sets of barricades earlier Tuesday morning in an effort to prevent protesters getting close to it. The barriers, combined with the fact that the statue is continually monitored by surveillance cameras, prompted many to state that Silent Sam is better protected than any student on the campus.

At times Tuesday night, police had difficulty controlling the crowds as protesters chanted and marched for several hours, at times taking to Franklin Street and forcing the closure of the road, as officers dressed in riot gear guarded the monument.

University officials said two people were arrested by campus police in connection with the protest. One man was arrested by Chapel Hill police and charged with wearing a mask on public property and resisting arrest- both misdemeanor charges.

Those were not affiliated with the university, UNC officials said.

Another person arrested was 19-year-old Claude Wilson, a UNC student who was taken into custody after officers said he retreated from the crowd and pushed away officers when he was told to move.

"As a university, the free exchange of ideas under the First Amendment is core to our mission. Carolina has long been a hospitable forum and meeting place for the peaceful dissemination of differing views. It's important to note that the vast majority of those who attended tonight's rally honored that tradition," the school said in a statement. "Unfortunately, some individuals did not behave in this spirit. University police arrested two individuals who were not affiliated with the university."

Protesters were blocking and hitting a patrol vehicle as deputies attempted to drive away with one man who was taken into custody. Police had to physically remove people from the front of the van.

Protesters sat in the street, pledging to stay sitting until those in custody were released.

Protestors are sitting on Franklin sidewalk, vow to not leave until the detained persons are released pic.twitter.com/BMGorXbnBC

Demonstrators held signs that read "No Trump, No KKK, No Racist USA" and "Stop pretending racism is patriotism."

"Silent Sam is more protected than any student at this university," one demonstrator yelled. "Folt and the administration continue to prioritize wealthy alumni over students of color."

"This is Silent Sam's last semester! We will not be silenced by wealthy alumni and the police!"

"We're supposed to be the people's university," another yelled. "Carol Folt, Where are you?"

The crowd respected the barrier around the Confederate monument.

The crowd dwindled by about 10 p.m., although many protesters remained seated by the barricades around the statue late Tuesday night.

Some who attended the rally were calling for the statue to remain on the campus, including alumni Cheyenne Wiley, who said that the statue commemorated those who fought and died in the Civil War.

"I went to school here. Those 56 students joined the Confederacy for whatever reason. That's what the statue is here for," he said.

Gov. Roy Cooper released a statement Monday, saying that UNC system officials have the authority to take immediate action if they believe the statue is posing a risk to public safety.

"If the University and its leadership believe such a dangerous condition is on campus, then the law gives it the authority to address those concerns," Cooper wrote.

A spokesperson for the University of North Carolina at Chapel Hill released a response on Tuesday, saying the university does not legally have authority to remove the statue from campus unless a building inspector concludes physical disrepair of the statue poses a threat to public safety.

"We continue to believe that removing the Confederate Monument is in the best interest of the safety of our campus, but the university can act only in accordance with the laws of the state of North Carolina," the statement read.

The university posted "Rules for Events at the Silent Sam Statue and on McCorkle Place" around the monument and campus prior to the rally. Rules included no alcohol or drugs, No weapons, no damaging or defacing public property and no wearing hoods or masks to conceal identity.

Chapel Hill Transit planned detours to avoid the northern part of the UNC-Chapel Hill campus during the duration of the protest. 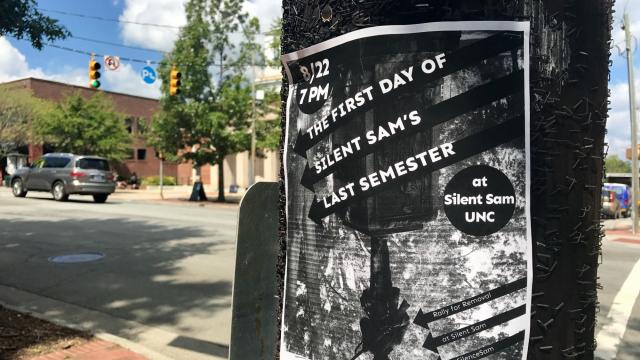 UNC officials on Monday sent a letter to Cooper's office, expressing fear that the statue, which has been the subject of debate for several years and has previously been vandalized, could spark protests that could lead to injury or property damage.