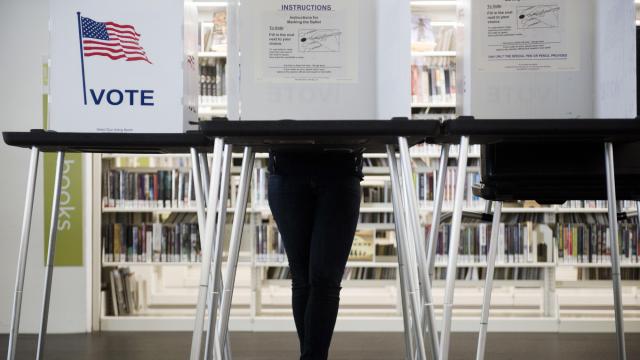 Raleigh, N.C. — The vast majority of colleges and universities in the state haven't submitted the paperwork required before students can use campus IDs to vote in North Carolina elections, and the deadline's this week.

Update: Wednesday, shortly before noon, University of North Carolina system General Counsel Tom Shanahan said in a statement that he expected all UNC campuses would meet the deadline and that the system hopes the State Board of Elections "will approve those requests and agree with what we believe is both the legislative intent and the legislative requirement for these identification cards." The deadline for universities and other colleges to file this paperwork hits at midnight. The State Board of Elections has until Friday to decide whether the paperwork passes muster.

Republican leaders in the General Assembly, who set the deadline after voters approved a constitutional amendment for voter ID last year, took a wait-and-see approach Tuesday as Democrats asked for an extension. Both sides said they expect students will be able to use their IDs at the polls despite the looming issue.

A key House leader committed to that, and the House Democratic leader said he had faith in the promise.

The state Senate voted Tuesday to essentially delay all photo ID requirements for the 2019 elections. Democrats largely voted against the measure because the bill didn't also deal with the college ID issue, which Republicans were content to put off for now and which won't be relevant until the 2020 elections.

The State Board of Elections hasn't had time to implement all of the rules controlling voter ID at the polls, which the General Assembly laid the groundwork for in December, and there are two special congressional elections scheduled this year.

As for the state's colleges and universities, about 10 have filed the needed paperwork ahead of a Wednesday night deadline for submission. The deadline for the State Board of Elections to approve those submissions, set out in law, is Friday. The law says that's the deadline not only for the 2019 elections, but for 2020 as well.

There are 58 community colleges and 16 public universities in North Carolina, plus private colleges.

College officials are supposed to file paperwork promising their IDs meet a series of state requirements, and they must do so under penalty of perjury. Some have balked. House Rules Chairman David Lewis said two weeks ago the issue would be worked through quickly and that the deadline might need to be pushed. Senate Republicans were unwilling Tuesday to tack a change into their 2019 delay bill, saying they wanted to see first how many colleges act by the deadline.

They tabled two Democratic amendments on the issue. Senate President Pro Tem Phil Berger said Republicans would be "consistent" with the original voter ID bill, which passed in December with widespread agreement that college IDs would be accepted. But Berger, R-Rockingham, said it would "be inappropriate to get too deep into what we would do if the deadline passes" as Democrats sought assurances that college students wouldn't be punished if their campus misses the deadline.

Berger harkened back to his own college days.

"If the professor told me I had another week, guess when that paper would come in?" Berger said. "I think we need to wait and see what sort of submissions we get."

Lewis, R-Harnett, said later in the day that General Assembly staff has had "nearly daily contact" in recent weeks with university officials and the State Board of Elections and that the sides have had good conversations about the requirements. Changes may be needed after the deadline passes, he said, and the 2019 delay contained in Senate Bill 214 gives everyone time to address them.

Rep. Ray Russell, D-Watauga, said he thought he had Republican support two weeks for a bill to address the college issue and added Tuesday that he was worried Republicans would "shut out the universities." Lewis said that, if need be, he would support Russell's bill.

But he hasn't signed on yet.

House Minority Leader Darren Jackson, D-Wake, said Tuesday evening he was "confident that the student IDs will be allowed."