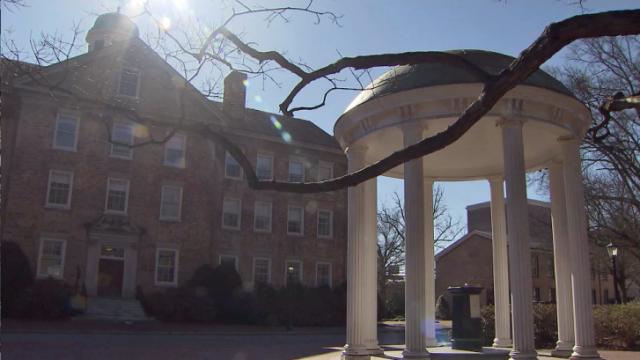 Chapel Hill, N.C. — The University of North Carolina at Chapel Hill has formally asked the nation's highest court to reverse a ruling that earlier this year forced school officials to release the names of students sanctioned for sexual assault.

In a petition to the U.S. Supreme Court dated Monday, attorneys for the university and the state Department of Justice argued that a federal law protecting the privacy of educational records gives UNC-Chapel Hill broad discretion over whether to release disciplinary records related to sexual assault. And they want justices to overturn a May decision by the state Supreme Court, which ruled 4-3 that North Carolina's public records law requires such disclosure.

The university turned over records in August in response to the court order, revealing the names of 15 students sanctioned for sexual misconduct through its secretive disciplinary process dating back to 2007. In the wake of the ruling, other universities in the UNC System have released similar records.

But attorneys for UNC-Chapel Hill argue the case is still relevant because it's "likely to generate disparate rules for thousands of colleges and universities across the country."

And indeed, if the high court takes the case, it will have far-reaching implications for the interpretation of the Federal Educational Rights and Privacy Act, a law UNC-Chapel Hill and other colleges across the country frequently use to deny requests for public information.

"FERPA and its accompanying regulations together empower educational institutions to exercise their own independent judgment regarding the disclosure of education records related to sexual assault," UNC's attorneys wrote in the petition. "Under this Court's precedents, state law cannot override or constrain the federal grant of discretion."

The case itself dates back to September 2016 with a records request submitted by a coalition of media organizations including Capitol Broadcasting, WRAL's parent company, and The Daily Tar Heel, UNC-Chapel Hill's student newspaper. The request sought documents on those found responsible for rape, sexual assault and other sexual misconduct by UNC-Chapel Hill's quasi-judicial disciplinary bodies, which do not make their findings public.

Language in federal law specifically calls out records related to violent and sexual crimes, saying universities may disclose three specific bits of information: the student's name, the violation committed and any sanctions imposed on the students.

When UNC-Chapel Hill denied the request, the coalition sued. And for the last four years, the university has argued it exercised the discretion granted by FERPA to protect victims and the confidentiality of the Title IX process.

A unanimous state appeals court and a state Supreme Court majority both disagreed.

In their petition to the U.S. Supreme Court, attorneys for UNC-Chapel Hill argue these rulings are incorrect "as a matter of federal constitutional law."

"The Supremacy Clause provides that 'the Laws of the United States' are 'the supreme Law of the Land,'" attorneys wrote. "Under that Clause, a state public records law cannot alter the meaning of FERPA and its accompanying regulations."

Records released by the university do not contain information about any victims of sexual assault. Nor has the coalition sought such records in its requests.

But attorneys for the university also argued in their filing that the North Carolina Supreme Court's decision "threatens to undermine" efforts to address sexual assault on campus. Disclosing sanctions against students found responsible for sexual assault, they wrote, "hinder the University's ability to educate and rehabilitate students through the Title IX process" – and they may expose the victims as well.

"Perhaps most significantly, confidentiality is critical to encouraging victims of sexual violence to report incidents and to participate in the University's Title IX process," UNC-Chapel Hill attorneys wrote. "If victims cannot trust that their identities will remain confidential, they may hesitate to come forward."

Since the four-year legal battle over these records began, the university has been under increasing pressure from federal officials over the issue of sexual assault on campus. In 2018, the U.S. Department of Education determined after a five-year investigation that the university violated Title IX regulations in its handling of sexual assault cases. And earlier this year, the agency concluded that UNC-Chapel Hill officials failed to follow federal law governing the reporting of crime on campus.

The U.S. Supreme Court is not obligated to take up a review of the case, which requires the agreement of at least four justices.

Hugh Stevens, an attorney for the media coalition, said they are reviewing the filing and will decide whether to file a response. He declined to comment further.