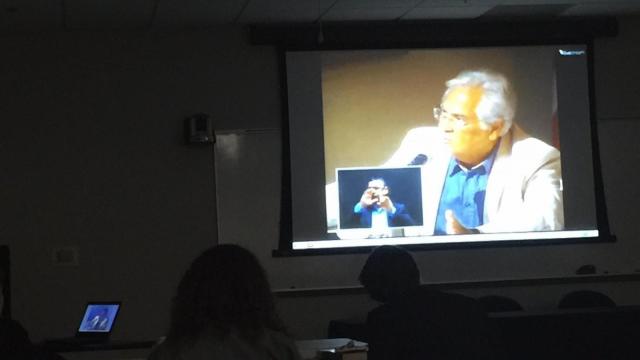 Raleigh, N.C. — Scholars from the Smithsonian Institution and the Universidad del Turabo in Gurabo, Puerto Rico, discussed Puerto Rican culture and literature Thursday in a session available online at museums across the country, including the N.C. Museum of History.

Professors María DeGuzmán, Ariana Vigil and Laura Halperin from the Latina/o Studies Program at the University of North Carolina at Chapel Hill participated in the panel discussion "Puerto Rican Authors Writing Outside the Island."

DeGuzmán, a professor of English and Comparative Literature as well as founding director of the Latina/o Studies Program at UNC-Chapel Hill, is the author of two books: "Spain’s Long Shadow: The Black Legend, Off-Whiteness, and Anglo-American Empire" and "Buenas Noches, American Culture: Latina/o Aesthetics of Night."

Vigil is an assistant professor in the Department of Women and Gender Studies at UNC-Chapel Hill. She is the author of "War Echoes: Gender and Militarization in U.S. Latina/o Cultural Production."

Halperin is an assistant professor in the Department of English and Comparative Literature and the Latina/o Studies Program, as well as academic director of the Scholars’ Latino Initiative at UNC-Chapel Hill. She is the author of "Intersections of Harm: Narratives of Latina Deviance and Defiance."