Rachel Nash never intended to go into acting. In fact, the 23-year-old graduate of the University of North Carolina at Chapel Hill hoped to find a career in her major of broadcast journalism.

Then came the "The Hunger Games."

"I read the books in three days and couldn't put them down," Nash said.

She was raving about the books during a family gathering when her aunt mentioned the film was set to shoot in North Carolina. Nash soon found the casting information and sent her photo in.

Nash scored a role as an extra, filming scenes at the Knight Theater in Charlotte and the old Philip Morris plant in Concord.

As one of the many residents of the Capitol, Nash was outfitted in bright, high-fashion garments.

"It was like a color explosion on the set," Nash said. 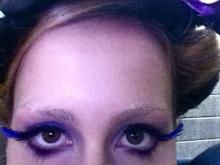 Each extra had specific color schemes, some were dressed all in pink or blue. Nash wore purple and black.

The makeup was also cutting edge. Their eyebrows were bleached and sometimes filled in with different colors. Their eyelashes were covered in feathers.

The already tall Nash got a chance to tower over her fellow extras during a train scene involving the Tributes, when wardrobe put her in extra high wedge heels. She said the action marker closed right in front of her face, so she is hopeful the scene will make the film's final cut.

But the life of an extra isn't all glamorous.

"There was a lot of waiting," Nash said.

"Stanley Tucci was my favorite to watch act. He could just turn it on so quick," Nash said, noting his improvisation skills. "It was like watching a play."

Cell phones were banned from the set, as the film's producers wanted to keep any secrets off of social media.

Extras were allowed to take photos of themselves for personal use, but were told to avoid posting them on social media until the film was released. Nash hid in a bathroom to grab these shots of the evolution of her costume over several days.

Being surrounded by characters from a book she loved was surreal, Nash said.

"It was like when you are a kid and you wish you could be in the movies or life was like the movies," she said.

Although the casting of Jennifer Lawrence as lead character Katniss Everdeen initially created some controversy among die-hard fans of the book, Nash said Lawrence appeared to be a great fit for the role in the scenes she watched.

"She seems to have a very sassy attitude and that's perfect for Katniss," Nash said.

For about eight days of work, Nash took home close to $1,000. Not bad for playing dress up and forming bonds with her fellow extras.

The role also lead her to an extra gig on Showtime's "Homeland."

Nash, who also dabbles in modeling, has even found a job in her industry of choice – news. She began working on the WRAL News assignment desk earlier this month.

Due to her news duties, she won't be seeing "The Hunger Games" until Friday night. That's when she will find out if her scenes made the final cut.

UPDATE: Rachel did make the cut for a few seconds! She was in the scene when the Tributes arrive on chariots. Did you spot her?