For six years, from 9th grade through his sophomore year in college, UNC linebacker Jake Lawler considered taking his own life every day.

“I think with depression, you just wake up every morning when you’re in it and the world around you has been darkened, and you feel like you’re the reason for it,” Lawler said. “The colors don’t look as vibrant as they used to, the sounds aren’t as loud as they used to be, the world isn’t as friendly as you once thought it was.”

Lawler suffered with depression largely in silence during those six years. But after telling a few friends and family members, Lawler published a 2,000-word online essay titled “A New Life” about his struggle. In it, he writes about being bullied, feeling inadequate, wanting to commit suicide, and, finally, finding solace through writing. 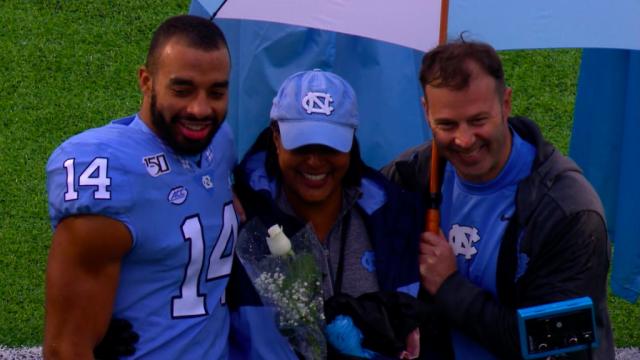 The response to his work was “overwhelming,” according to his parents. Teenagers and other parents reached out to the Lawler family with their own stories of mental illness. One father, who had lost his 18-year-old son to suicide, sent Lawler the eulogy he read at his son’s funeral. A 15-year old boy who had been planning to kill himself reached out to say that the post had changed his mind.

For Lawler, the replies to his story opened the door to peace, healing and community.

Jake Lawler is not Jake Lawler without football. He began playing the sport in seventh grade and joined South Mecklenburg High School’s varsity team as a freshman. His interest in football, which surprised his parents, quickly became the start of a well-documented journey. He made ESPN’s list of top 200 high school players, was ranked number 17 among defensive ends and received official offers from more than 10 programs, including the Georgia, Oklahoma and Virginia Tech. 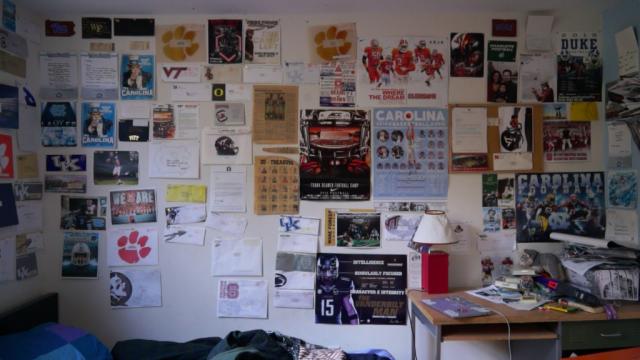 “If you grew up in Charlotte from 2015 to 2016, there was a good chance you knew who he was,” his brother, Conor Lawler, said. “Almost to a fictional level, he was extremely popular, extremely well-known.”

But after injuring his shoulder and labrum during his senior year in high school, Lawler, 21, was redshirted in his freshman season. The 6’4” defensive lineman has made just 8 career tackles while at UNC, during the 2018 and 2019 seasons. His parents, Andy and Michelle Lawler, knew he was making less of an impact in college than he had hoped. Still, they were shocked when Lawler called home in April 2019 to tell his parents about his depression.

“He did an amazing job of hiding it …,” his brother said. “You never would have been able to tell …”

“His experience with football at North Carolina has not been uniformly positive,” Andy Lawler said. “But the fact that he thought about hurting himself was completely alien to our concept of who he was.”

The seeds for Lawler’s depression had been sown for years. Not only is depression written into his family’s genetic code, Lawler was bullied growing up. His middle school peers ridiculed his physical appearance, calling him “fish lips” so often that some students didn’t know his true name. When his black friends found out that Lawler’s father is white, they ostracized him by calling him “cracker” and “white boy.”

“If I was too weird for the white kids and too white for the black kids,” he writes in ‘A New Life,’ “what was I?”

Though he was a successful student in high school with a 4.0 GPA and a tight circle of friends, he came close to killing himself twice: once in high school and once in college.

“I sat on a bucket in the shed behind our house with a belt laced between my fingers,” he writes in his essay. “My hands were shaking uncontrollably, and I dropped the belt more than a few times. I tried in every way to force myself to go through with it, but staring at the abyss of death made me realize something. I wasn’t ready to go.” 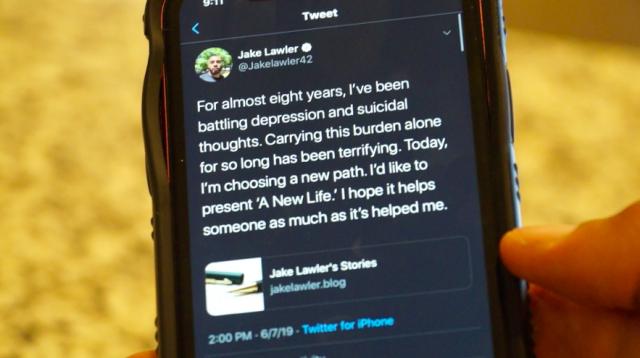 Lawler’s parents initially disagreed with his decision to publish the piece online, concerned about social media cyberbullying. They were surprised by the positive feedback. And, though Lawler was nervous about sharing his depression with the entire football team, Michelle Lawler’s said the group “reacted with complete love.”

That doesn’t surprise Dwight Hollier, UNC’s senior associate athletics director for student-athlete health, well-being and program outreach. He said that a close team dynamic helps create a “level of comfort” for players who decide to share their struggles. Over the years, he said that men have become increasingly open to discussing their feelings and seeking help. But it wasn’t always that way.

“As boys, we were taught to just suck it up, to push through, to brush it off, to get back in there,” Hollier said. “And when you grew up in a world where that’s all you hear, particularly as an athlete – you have to be tough and strong, and you can’t let them see you cry. It becomes your way of operating in the world. So instead of sharing and crying and expressing hurt, you push it all down and you block it out because you feel like that’s what you’re supposed to do.”

Hollier communicated with Lawler through the publication of the essay, and helped connect him with mental health resources within UNC’s athletic department. Now, Lawler attends sessions with UNC sports psychologist Dr. Jeni Shannon for his depression. She helped him work through emotions he felt after publishing the essay and then helped him delve into the causes of his illness.

“Carolina treated him like he had a broken arm or that he had – God forbid – cancer,” Andy Lawler said. “They treated it like a sickness, which is what it is. And they wanted him to get better.” 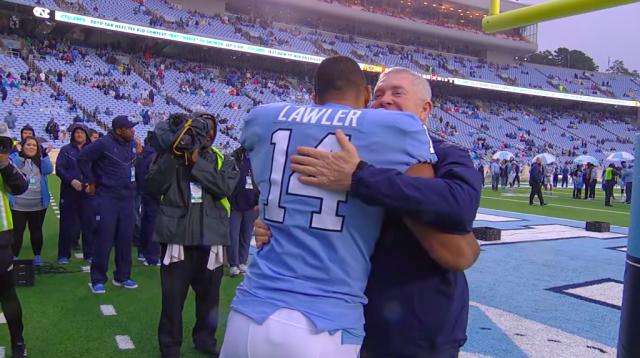 Brendan Carr, a sports psychologist at UNC, said that the athletic build of young players can distract from the unique psychological needs of their developing minds.

“Underneath the jerseys and the uniforms, they’re still college students,” Carr said. “And you have to treat them with the same care you would any young person. Even though on the outside you might look at (a 6’8, 300-pound lineman) and think ‘That’s a grown man,’ the reality is that’s an 18-year-old who was two weeks removed from high school when they enrolled at the university.”

“We’re really playing football; we’re putting our lives at risk for a dream and for goals that we want to reach,” said Michael Carter, a UNC running back and one of Lawler’s best friends. “And when you put it like that, it really takes a toll on you mentally. Being able to talk to somebody is important.”

On Nov. 21, Lawler announced his plans to graduate one school year early from UNC, cut short his collegiate football career and move to Los Angeles to find work in the entertainment industry. Though his football career is ending, it gave him a sizeable platform on which to share his story. And he has advice for others who may be struggling with the same illness. 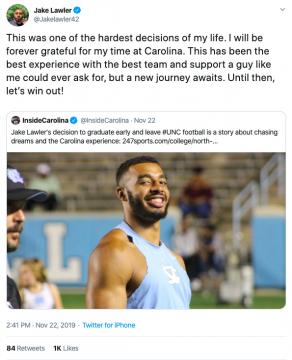 Since the day he went public with his story, Lawler said that he hasn’t considered suicide once. Hollier thinks the extra visibility will help other young people overcome their own depression.

“I thought that he was such a brave young man to talk about his experiences … and then to share it as widely as he has,” Hollier said. “It’s just been really great to see. Because he’s going to make such a difference for other young men who are looking to him and other young men who may be struggling; who may have some thoughts of wanting to harm themselves. It’s going to move the needle for a lot of young people.”

Story by Adrianne Cleven; Video and Images by Cambria Haro

Adrianne Cleven is a senior from Moncure majoring in Reporting and Religious Studies. She previously served as a digital marketing intern for the Conservation Trust for North Carolina. She hopes to gain professional public relations and journalism experience before attending law school.

Cambria Haro is a senior from Los Angeles majoring in Broadcast Journalism. She has experience working for Fox Sports San Diego and is open to a variety of career opportunities.