UNC crossing guard gets cross-country trip thanks to students' generosity

Chapel Hill, N.C. — For nine years, Joann, a crossing guard at the University of North Carolina at Chapel Hill, has helped students get to and from class safely.

Joann always greets students with a smile, but she never realized what kind of an impact she was making until the community came together to help her fulfill a lifelong dream.

"I'm at a loss for words. I just can't find the words to explain it. You know, they really care," Joann, who asked that her last name not be used, said Thursday.

Sophomore Bhairavi Rajasekar took Joann's photo and posted it to Facebook. That is what started it all. 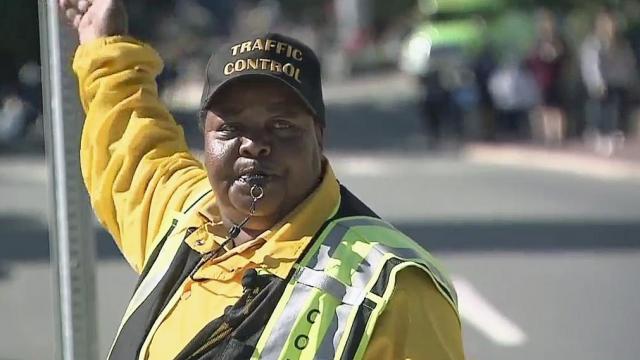 "When you see her, everyone recognizes her as, 'Oh, the crossing guard lady,'" Rajasekar said. "But no one really knows who she is."

Joann has a lifelong dream to travel and hasn't seen her son, who lives in Arizona, in three years. Rajasekar shared her story on Facebook.

"I saw her original post, and people were commenting all kinds of nice things to her," said junior Carlos Salas.

That's when Salas stepped in and created a GoFundMe account to make Joann's dreams a reality.

"The first thought that came to my mind was, you know she has a dream that she's expressed, what if these people who are saying such nice things about her came together and actually helped her out," Salas said.

The generosity shattered the $700 goal. The account had raised more than $5,000 by Thursday.

"It's just amazing. I never in a million years would think something like this would happen to me," Joann said.

Students say Joann is special to them.

"It's that glimmer of hope she gives to so many people on a daily basis," Salas said.

Joann says the feeling is mutual.

"They are so nice, and they are really friendly, and I just enjoy it. I love them," she said.

Joann plans to take the trip to Arizona in January. With the leftover money, she said she hopes to move into a nicer apartment.