Raleigh, N.C. — In the wake of mass shootings in Texas and Ohio over the weekend, Gov. Roy Cooper, Democratic lawmakers and a survivor of a shooting at the University of North Carolina at Charlotte are calling on legislative leaders to stop bottling up bills that could head off a similar shooting in North Carolina.

"The time for condolences alone has long passed, and now it is time for action," Cooper said in a statement Monday. "The General Assembly should move quickly to debate the details of these bills so that we can end up with legislation to keep deadly weapons out of the wrong hands. I am also directing my administration to ensure we are doing what’s needed to try to prevent these tragic events."

House Bill 86, dubbed the Gun Violence Protection Act, was filed in February and includes provisions that would require a permit for all guns purchased in the state, not just pistols, and set a three-day waiting period for purchases. It also would set a minimum age of 21 to buy an assault rifle, ban high-capacity magazines and require owners of guns that are lost or stolen to report the loss or theft to police.

House Bill 454 was filed in March and would create a so-called "red flag law" in North Carolina, which would allow a judge to temporarily take away someone's guns if they're found to be an imminent danger to themselves or others. The person would also be banned from buying or borrowing other guns as long as the order is in effect.

Cooper proposed many of the same changes last year after a shooting at a Florida high school and again this spring after two students were killed in an April shooting at UNC-Charlotte.

But both bills have languished in the House Judiciary committee without a hearing.

"Today is about making a choice," said Rep. Christy Clark, D-Mecklenburg, a sponsor of House Bill 86. "Do you side with gun violence survivors and victims? Or do you side with the gun lobby?"

“We’re winding down, and I don’t know that there will be an opportunity for us to hear any of those bills this session," Davis said. "I also don’t know what the Senate’s appetite is.”

It's unclear when this legislative session will adjourn. Cooper and Republican leaders are fighting over the state budget and Medicaid expansion, and House Speaker Tim Moore has indicated the House may be in session in October unless the budget standoff is resolved. 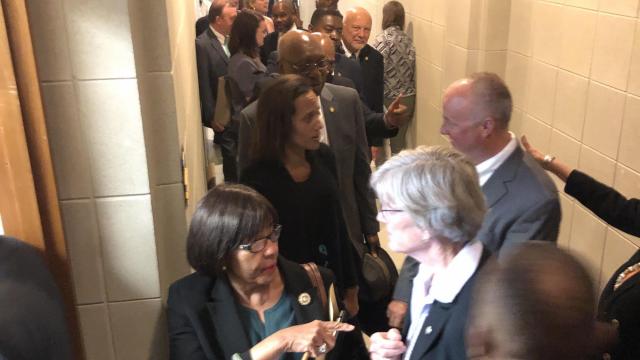 With little expectation that Republican leadership will move the bills, House Democrats lined up Monday night to sign a discharge petition. The effort was largely symbolic, however, since it takes a majority of members to force legislation to the floor and no House Republicans joined them.

Rep. Deb Butler, R-New Hanover, said a couple of Republican House members joked about the discharge effort during the Monday night sign-up and refused to join.

"It is time to do something," Butler said Tuesday, echoing a rallying cry from people in El Paso and Dayton. "We're looking for political courage. ... My fear is there are not six Republicans in this building who have that kind of courage."

Drew Pescaro of Apex, a student wounded in the UNC-Charlotte shooting, joined Democratic lawmakers in pressing for action on the gun legislation.

"I can't help but feel the deaths of Riley Howell and Reed Parlier at UNC-Charlotte weren't remarkable enough to bring this bill to a vote three months ago," Pescaro said. "Was the shooting in Charlotte not inspiring enough?"

He showed off the scars a bullet left in his lower back and abdomen.

"You got elected to act," he told lawmakers. "You did not get elected to simply not allow things to get voted on."

Republican lawmakers have expanded gun rights in North Carolina in recent years, preventing any gun control bills to be debated, not even after the Sandy Hook Elementary School massacre in Connecticut in 2013 and the Marjory Stoneman Douglas High School shooting in Parkland, Fla., last year.

Rep. David Lewis, R-Harnett, chairman of the House Rules committee, said the GOP caucus has discussed the weekend shootings, but there's no support at this point for tougher background checks or waiting periods. The caucus prefers to focus on overall mental health instead, he said.

"Focusing only on the gun and not the one who holds the gun tends to be something that gets folks in trouble, if you will," Lewis said.

Nationally, although President Donald Trump suggested stronger background checks as a way to limit mass shootings, members of North Carolina's congressional delegation were slow to respond to questions about the issue.

"Rep. Hudson also supports legislation in the current Congress to strengthen background checks and to improve communication between state, local and federal law enforcement so potential shooters don’t keep falling through the cracks," the spokeswoman said in an email. "Congressman Hudson also believes we need to look at commonalities between these shooters like the use of behavioral drugs and the effects of violence in society, including violent video games."

Hudson believes that red flag laws need "strong due process protections, requirements for mental health treatment and strict punishment for frivolous charges," the spokeswoman said, and while calling white nationalism "pure evil," no one should excuse "violence from the left" either.

"I’ve spent my career working for responsible solutions to the gun violence epidemic. Although there’s no one solution that will prevent every tragedy, keeping firearms out of the wrong hands is entirely consistent with the Second Amendment to the Constitution and we must act," Price said in an email. "Every day, every hour, that we don’t act is allowing for senseless violence to continue."

In addition to backing red flag laws, he noted that he supports closing loopholes that allow people convicted of domestic violence, stalking and misdemeanor hate crimes to purchase weapons.

Price also called on Trump to tone down his rhetoric on immigrants, asylum seekers and refugees.

"I believe these words have consequences and are infecting our culture. It’s no coincidence that white nationalism is on the rise," he said in his email. "Young men are being radicalized on the internet, and it’s not just ISIS. White supremacists are alive and active on the dark corners of the internet and on mainstream social media platforms and message boards."

Republican 2nd District Congressman George Holding didn't answer WRAL's questions but offered the following statement late Friday: "When I was U.S. Attorney, I saw my fair share of violent crime. And I prosecuted violent criminals. We have laws against harming other people. But I think more can be done to keep guns out of the hands of criminals and the mentally ill while not infringing on the rights of law-abiding citizens."