UN’s Expert on ‘Extreme Poverty’ Is Investigating Britain. Why? 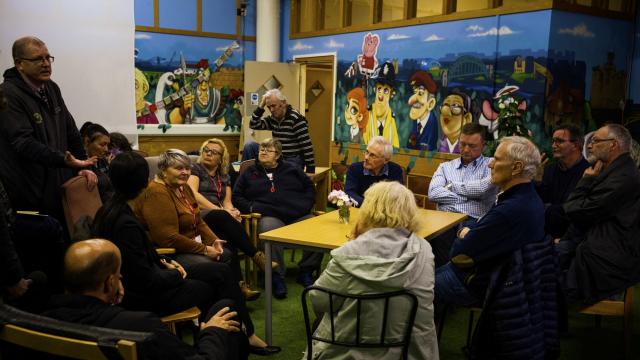 NEWCASTLE, England — At a food bank in a rundown part of northeast England, an unemployed mother and her adult son were having an odd morning. Denise and Michael Hunter typically come here for a quiet cuppa with the volunteers, a square meal and sometimes a food parcel or two.

But on this day, the Hunters had a surprising tea date: the United Nations special rapporteur for extreme poverty and human rights, Philip Alston; his four assistants; two television cameras; a dozen journalists and the local priest.

“It’s a bit different to how it usually is,” said Denise Hunter, 57, her face beaming. “It’s like we’re royalty or something.”

It was Day 3 of Alston’s two-week tour of the world’s fifth-richest country — a hectic 2,000-mile mission across some of the poorest districts in Britain. He is visiting food banks, job centers, community charities and government ministries in London, Oxford, Cardiff, Bristol, Edinburgh, Glasgow, Belfast and Essex — as well as here in Newcastle — to assess why about a fifth of Britons remain in poverty despite rising employment levels, economic growth and pockets of enormous wealth.

Many might be as surprised by his presence as the Hunter family was, or the reporters struggling to keep up with him as he rushed between as many as five meetings a day, often without pausing for lunch or supper.

Special rapporteurs for extreme poverty are mandated to visit and investigate countries with high levels of deprivation and then report their findings to the United Nations. They have historically spent most of their time in the developing world, and Alston’s trip to Britain is only the second mission to a Western European country by a poverty rapporteur this century, the other being to Ireland in 2011. The rapporteur has also visited the United States twice since 2000.

“There’s an oddity to this, obviously,” said David Gordon, director of the Townsend Center for International Poverty Research at the University of Bristol, who met Alston on the second day of his tour.“When you think of the special rapporteurs on extreme poverty and human rights, you expect them to be visiting sub-Saharan Africa or Haiti. You don’t expect them to be visiting the U.K.”

Yet for Alston, Britain in 2018 is an obvious place to focus his energy, and not just because child poverty and food bank usage are on the rise here.

Having pioneered the welfare state in the late 1940s and the privatization of the state in the 1980s, Britain in the 2010s has become the world’s main laboratory for the politics of austerity. In response to the 2008 financial crisis, few governing parties have pared back the state for so long, and with such ideological glee, as the ruling Conservative Party in Britain.

“The U.K. was a world leader in social security after World War II, it was a world leader on privatization on a large scale and it is a world leader right now in self-imposed austerity,” Alston said in an interview during a rare pause in his schedule, aboard a train in northeast England. “And so it is an important case study to better understand the implications of an austerity approach.”

Since 2010, the government has set in motion more than $39 billion of cuts, freezing or reducing welfare payments and housing subsidies for families and disabled people and cutting back youth and children’s services, as well as funding for local authorities. Bungled technical reforms have also delayed payments to struggling families, forcing thousands into unnecessary debt and rent arrears.

Here at the Newcastle West End food bank, a one-story building where staff members hand out nearly 300 food parcels a week, local residents were queuing up to tell Alston how they had been failed by the reforms.

One of them was Denise Hunter. Until a year ago, she and her husband had been getting by, living off the money her husband made from painting toy figurines. Then he fell seriously ill, forcing the couple to apply for welfare payments.

But because of widely documented problems with the Conservatives’ new welfare system, known as Universal Credit, the Hunters’ predicament has worsened. Almost all new Universal Credit recipients must wait around six weeks to receive their first payment, forcing those without savings into debt. The Hunters were no exception.

With no income, the Hunters immediately went into rent arrears, unable to pay for electricity, food and heating. Only the generosity of their landlord prevents their eviction now, and only the existence of the food bank keeps them fed.

“We wouldn’t be able to survive without the food bank,” Denise Hunter said.

To avoid further cuts to their payments, she must regularly provide the government with online updates about what she is doing to find work.

But because she cannot afford a mobile phone or regular home internet, she can sometimes only do this at the city’s main library. And since she cannot afford the bus fare, she must walk 3 miles to get there — a lengthy round trip that hinders her search for work. Libraries closer to home have either closed or had their hours and services scaled back, because of government cuts.

Hospitalized with a heart condition in March and unable to update her online account, Denise Hunter had her payments suspended for three further months, forcing her further into debt, she said.

Denise Hunter’s situation is far from unique, staff members at the food bank said. The demand for their food parcels has increased by a fifth in the past six months.

At the discussion was Thushara Chandrasiri, 35, who started receiving benefits in 2011 because of a disabled right arm. But this year, the government reassessed Chandrasiri and said his disability was not as serious as they had previously judged, cutting his monthly welfare payments by just over $500.

A case worker said he “should be used to it by now,” Chandrasiri remembered being told. “You’ve got a left hand as well.”

Next to him sat Tracey Whitenstall, 41, a single parent of three, whose life was upended when her family was transferred to the new welfare system. Because of an administrative error, the family’s payments were delayed by 10 weeks, shoving them into debt.

For several weeks, Whitenstall’s teenage son stopped attending school because she could no longer afford his bus fare.

He is among 600,000 children who have fallen into poverty since the start of the Conservatives’ reforms, a trend that is projected to continue by the Institute for Fiscal Studies, an independent analysis firm. The looming effect of Britain’s departure from the European Union, scheduled for March 2019, is also likely to worsen the situation, according to an alliance of children’s rights groups.

With the welfare changes, families on benefits are now an average of $2,700 worse off, according to calculations by the Child Poverty Action Group, an independent watchdog.

And while unemployment has more than halved under the Conservatives, wages have stagnated and the number of working families in poverty has risen.

Yet, poverty is a complex and contested subject in Britain, where there are several contrasting measures of deprivation, and some observers were skeptical about the necessity of Alston’s visit.

While child poverty has risen markedly in recent years, overall poverty levels have remained fairly steady or even dropped slightly — partly because of sharp falls in pensioner poverty since the 1980s. Though 1,550,000 were classed in 2017 as destitute, or experiencing extreme poverty, by the Joseph Rowntree Foundation, a poverty research group, that figure was a quarter less than in 2015.

If Alston ends up linking poverty to the government’s benefit policies, “he would just be adding more noise,” said Edward Davies, director of policy at the Center for Social Justice, a think tank founded by Iain Duncan Smith, the Conservative minister who spearheaded the reforms. “My fear is that we have a debate about welfare reform in this country, and he could get embroiled in that.” Commenting on Alston’s visit in a written statement, a government spokesman said child and overall poverty rates had fallen since the Conservatives entered office — using a different measure from the one preferred by poverty researchers at the Rowntree Foundation and the Child Poverty Action Group.

Alston said he was keeping an open mind. In several meetings in Newcastle, he avoided asking leading questions and frequently played devil’s advocate to people seeking to blame the government.

As his train thundered north into Scotland that night, Alston said he would draw no conclusions until releasing his preliminary findings on Friday.

“It’s been said to me, ‘Come on, you must have had a draft before you came here,'” Alston said. “But on every mission I’ve always found myself asking after a few days, ‘What the hell am I going to say?'”