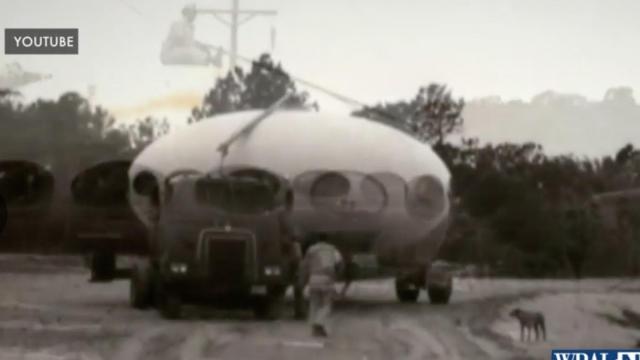 A mixture of history and folklore, our state has its own version of international wonders like Stonehenge and Shangri-La. For locals who love mystery and hidden history, here are seven strange wonders of North Carolina.

1. The train beneath Kerr Lake

Many of North Carolina's large lakes have mysterious things hidden just beneath the surface. Jordan Lake has the remains of centuries-old farming communities. Lake Norman has an airplane still sitting beneath the water. And Kerr Lake has an entire train still hidden under the waves.

In the days before Kerr Lake, a towering railroad trestle that ran across Nutbrush Creek was damaged by a forest fire. Even though it appeared safe to cross, in 1918, Engine Number 2 fell through it and down into the creek below.

It was an engine, a tender and three cars. Two brothers on board were killed, and the train was never recovered. Its remains are still beneath Kerr Lake, where thousands of locals swim and boat each year.

2. A Land of Oz theme park on top of Beech Mountain 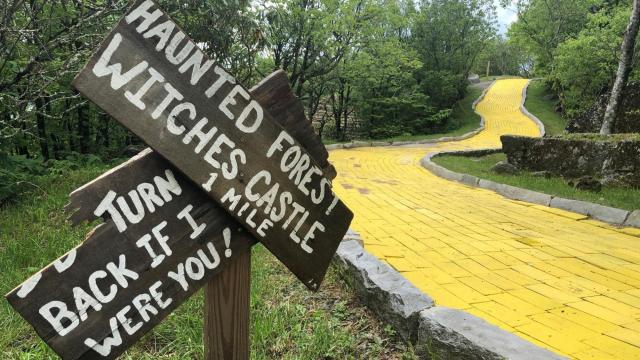 Somewhere over the rainbow, the real yellow brick road meanders across the North Carolina mountain tops.

The Land of Oz was designed in the 1970s by Jack Pentes, who refused to alter the land at all, but rather crafted the Land of Oz into the mountain's natural landscape, giving the entire park a sense of authenticity. He even walked the property on his knees so he could design from the perspective of a child.

Sadly, a fire in the Emerald City destroyed part of the Land of Oz in 1975. By the 1980s, the park had closed its doors. For years, the park was empty, creating an air of mystery and mystique as the yellow brick road, giant toadstools and witches's castle stood vacant. Now, however, the park opens its green Oz gates every few months for people to visit and explore once again.

3. The UFO of the Outer Banks 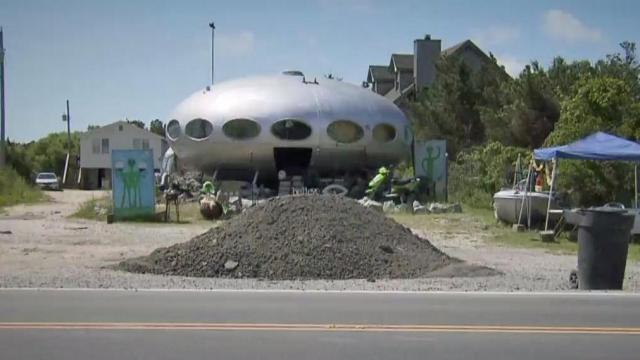 Around 50 years ago, a flying saucer landed in Dare County. Ever since, it's been a popular roadside attraction, dropping jaws and encouraging selfies from travelers driving down Highway 12.

The spacecraft is actually a Futuro House, which were round pre-fab homes designed in the late 60s and early 70s. The owners placed bright green aliens in the oval windows.

Debate takes off over future of 'Frisco UFO,' an Outer Banks staple

According to Atlas Obscura, the Dare County UFO has served various purposes throughout history, "including a Boy Scout meeting place, magazine office, and 'the Footlong Out of this World Hot Dog Stand.'"

4. Stonehenge of NC in Chapel Hill 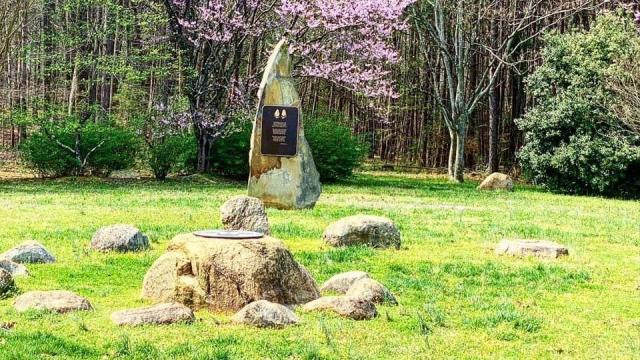 Many locals have no idea North Carolina has its very own version of Stonehenge right in the Triangle--a mysterious spiral of giant stone slabs and boulders with symbols and poems inscribed on them.

Named Stone Knoll, it was crafted by architect John Hartley, who created many mystic and mysterious spaces tucked away in the Triangle area.

He also created a labyrinth with a Shinto Gate at Starfield, with an inner circle in a large field, and an earthen mound. Several stone spirals in quiet offbeat places can be attributed to Hartley. 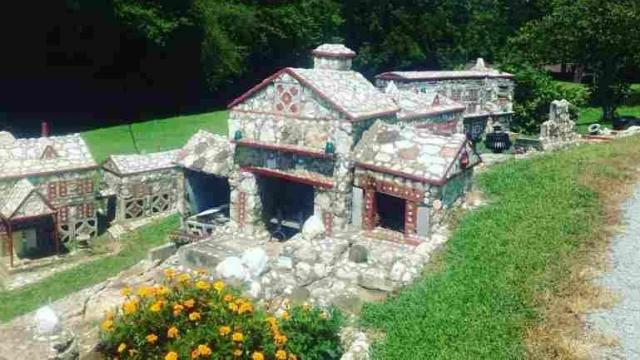 Shangri-La is a fictional wonderland, written about in 1933 in the novel Lost Horizon. It was described as a private, mystical, hidden valley--an earthly paradise, which very few ever discovered.

North Carolina has its own version of 'paradise on earth' thanks to tobacco farmer Henry Warren, who quarried stones and quartz from the earth himself and began building a miniature stone village, complete with homes, a school, a library, a church, a water tower and a fishing hole, over 40 years ago.

Warren painstakingly crafted 27 buildings over the course of a decade, even while fighting cancer. When he passed away, his loved ones finished his final structure: A hospital.

Warren's version of Shangri-La can still be seen along the winding roads of Prospect Hill, just off NC-86. Generations of travelers have found adventure and peace in his miniature stone village. 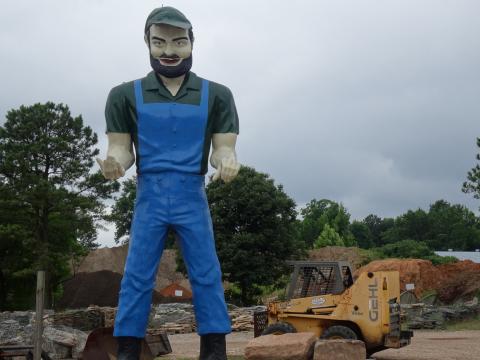 The Raleigh Giant has watched over Raleigh for decades, and he's played several roles throughout the generations.

He's been called many names, from Big Man to Muffler Man.

Decades ago, the Raleigh Giant stood outside a business on Downtown Boulevard, holding an oversized paint can for Giant Decorator.

He's changed outfits several times, lost his head in a tornado and lost his arm to vandals. Several of his brothers can be seen on highways around the country--including a couple in North Carolina. They're collectively known as Muffler Men.

Honorable mention: From an era when companies loved to advertise with oversized statues, North Carolina also has a giant cougar near Wendell.

7. Mermaid Pointe on the Cape Fear 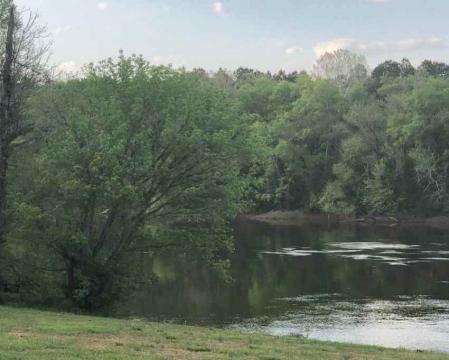 From faeries in the mountains to Nessie in Lake Norman to the Santer in Bladenboro and Bigfoot in the Uwharrie National Forest, North Carolina is home to centuries of history, mythology and folklore. However, many locals have no idea the Cape Fear has a pre-Revolutionary history of mermaid tales.

In the 1700s during the Revolutionary War, soldiers loved to spend evenings at Ramsey's Tavern.

Today, a roadside historic marker notates the location of Ramsey's Tavern, owned by Ambrose Ramsey, who was a member of the N.C. State Assembly. He also built Ramsey's Mill, which played a role in the Battle of Guiliford Courthouse in 1781.

According to history provided on NC Markers, both the tavern and the mill were destroyed in the early 1900s by flooding.

After long evenings of drinking Revolutionary soldiers walking home from the tavern often claimed to see mermaids sitting on a sandbar, washing seawater from their hair. For many years, the sandbar at the intersection of the Deep River and the Haw River, at the headwaters of the Cape Fear, could still be seen. The sandbar, like the mermaids, can no longer be seen, but the legends remain.

Many other wonders - what did we miss?

Did you know Raleigh once had an entire multi-acre farm full of strange giant statues, known as Gotno Farm? One of the giant pink dogs still exists in downtown Raleigh today.

Or do you know the strange origins of Raleigh's road names--like the mines beneath Lead Mine, or the six forks of Six Forks Road?

There are dozens of other mysteries, myths and unique historic roadside attractions all across North Carolina. If you can think of a wonder of North Carolina that you'd like to see explored, email our Hidden History journalist hleah@wral.com.