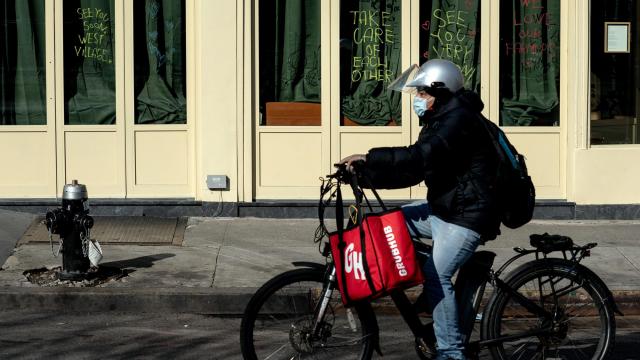 SAN FRANCISCO — Uber has agreed to acquire the food delivery startup Postmates for $2.65 billion as it aims to expand its presence in on-demand food delivery while its core ride-hailing business struggles.

The companies announced the all-stock deal Monday morning. Uber will combine Postmates with its own food delivery subsidiary, Uber Eats, which has been growing during the coronavirus pandemic. Postmates will continue to operate under its own name.

Food delivery apps, which connect drivers, restaurants and customers, have grown quickly in recent years, fueled by venture capital and armies of contract workers. But the apps offer very similar services, leading to heavy competition and pressure to keep fees low. While more people have been using delivery services during the pandemic, profits have been elusive.

As a result, delivery app companies have circled one another, aiming to make deals to gain scale. Postmates previously discussed possible deals with DoorDash, the largest service in the United States, and another rival, Grubhub, according to two people with knowledge of the talks.

Together, Postmates and Uber Eats would have a 37% share of food delivery sales in the United States, according to Edison Trends, which tracks credit card spending. DoorDash would remain the largest player with 45%, while Grubhub would have 17%.

Uber is looking for growth as people stay home during the pandemic and its ride-hailing business struggles. In May, Uber posted a $2.9 billion loss for the first three months of the year and announced that it was laying off 14% of its workforce. But revenue for its Uber Eats division rose 53%. From April to June, Uber said, bookings through Uber Eats more than doubled compared with a year earlier.

Daniel Ives, an industry analyst with Wedbush Securities, said in a note to clients that the deal was a “defensive and offensive acquisition in the food delivery space for Uber at a time with its core ride-sharing business seeing massive headwinds in this COVID-19 pandemic.”

Postmates, last valued by investors at $2.4 billion, is smaller than the other players, with about 10 million customers. Founded in 2011, it was among the first startups to use part-time “gig workers” to deliver customers whatever they wanted at the tap of a smartphone button.

Pierre-Dimitri Gore-Coty, Uber’s head of food delivery, will continue to run the global delivery business, Uber said. Bastian Lehmann, chief executive of Postmates, will stay on during a regulatory review of the deal. Longer-term integration plans are still being worked out, according to Uber.

In announcing the deal, the companies shared a few financial details about Postmates. In the first quarter of 2020, Postmates had revenue of $107 million and more than 115,000 merchants who used the platform. Uber said Postmates had performed especially well in the Southwest, including Phoenix, Las Vegas, Los Angeles and San Diego.

“You can expect to see some of these tactics at Uber Eats,” he said on a conference call with Wall Street analysts. “We think it’s just a wonderful combination.”

Postmates has raised more than $900 million in funding from investors including Spark Capital and Tiger Global Management, according to PitchBook. It had filed to go public.