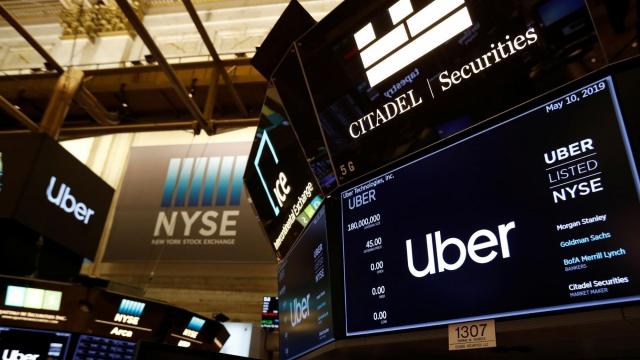 CNN — Uber was already the biggest high-profile IPO bust in recent memory. And it only got worse on Monday.

Shares of Uber fell nearly 11% for the day following a dismal debut Friday. The stock is now down about 17% from its initial public offering price of $45.

Uber is facing a lot of skepticism about its ability to make money anytime soon as it battles with rival Lyft for market share in the US.

Lyft, which went public in March, has been a Wall Street dud too. That stock fell 6% Monday and is now down more than 33% from its IPO price.

Uber and Lyft weren't helped by growing trade tension between the US and China either. The broader market fell sharply Monday morning after China responded to a US increase on tariffs for Chinese exports with higher tariffs of its own on US goods.

Uber's epic drop is also bad news for some of the top investors who bought stakes in the company relatively late in the game.

The company raised about $6.8 billion by selling nearly 140 million shares between December 2015 and February 2017 at a price of $48.77 a share, including a sale of about 71.8 million shares to Saudi Arabia's Public Investment Fund.

Japanese tech investing giant SoftBank is the largest investor in Uber. It owns nearly 13% of the company through its SoftBank Vision Fund. SoftBank's shares fell more than 3% in Tokyo Monday following Friday's drop in Uber's price.

SoftBank also has investments in several other so-called unicorns that could be close to going public, including Slack, WeWork and DoorDash. Wall Street's sudden disdain for money-losing startups — Lyft has also fallen dramatically from its IPO price — could be bad news for SoftBank.

And shares of Google owner Alphabet, which owns a 5% stake in Uber, closed down nearly 3% on Monday.