U.S. Troops Could Remain on Border Into 2019, Officials Say 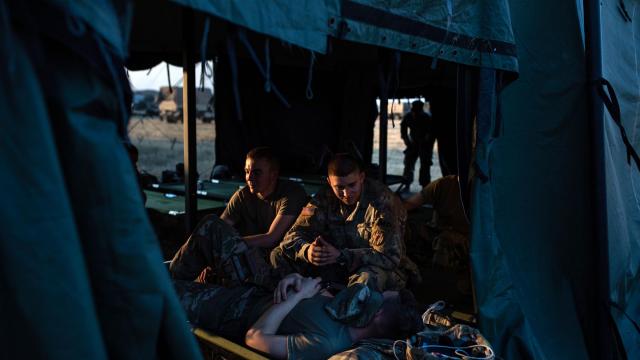 WASHINGTON — The Pentagon is considering keeping active-duty U.S. troops on the southwestern border into January, two Defense Department officials said on Wednesday, potentially extending a deployment to confront a caravan of migrants from Central America.

The military’s border mission is currently slated to end Dec. 15, and no final decision has been made to extend it, said the two officials, who spoke on condition of anonymity.

But talks about continuing it into next year come days after Border Patrol agents launched tear gas at a crowd of migrants attempting to illegally enter the United States from Tijuana, Mexico. The possible mission extension was first reported by NPR.

The roughly 5,900 U.S. troops on the border are spread between southwestern Texas and Southern California in a constellation of small bases where they have helped set up concertina wire and other security barriers.

In recent days, more than 3,200 migrants have reached Tijuana, where they will most likely wait for months before potentially gaining legal entrance to the United States.

Even as Pentagon officials consider extending the deployment into January, they are also looking at ways to bring home the troops before Christmas — underscoring how the mission remains loosely defined.

Defense Secretary Jim Mattis visited troops deployed to Texas the week before Thanksgiving. There, a soldier asked him if the troops would need to remove the hundreds of miles of concertina wire that they had strung up in the weeks before his arrival.

Mattis could not answer the question.

But last week, a White House memo authorized a more forward-leaning role for the active-duty forces, permitting troops to work alongside Border Patrol agents in duties such as crowd control and temporary detention.

The move by the White House, Defense Department officials have said, projects an image of a bolstered border, with soldiers standing side by side with border agents. But, the officials added, the troops’ presence also increases the chances of a misstep that could leave the Pentagon in a legally murky case.

Pentagon officials have sought to clarify the troops’ role as a legally defined mission operating under the Posse Comitatus Act, which prevents active-duty military personnel from participating in law enforcement activities.

Earlier this month, President Donald Trump called for up to 15,000 troops to guard the border against several approaching migrant caravans. The 5,900 soldiers the Pentagon has sent have carried a cost of at least $72 million.