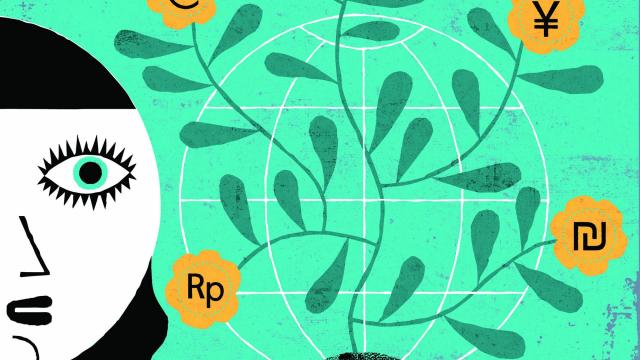 Just weeks after Wall Street celebrated what by some yardsticks became the longest bull market in history, stocks dropped so sharply that it might have seemed prudent to wonder whether the newest bear market had begun.

A 6.7 percent decline in the Standard & Poor’s 500-stock index in six trading sessions through Thursday nearly erased the 7.2 percent gain the index recorded in the third quarter. The market rebounded a bit Friday. But even before the six-day plunge, the narrowness of the quarter’s advance hinted that the market was on shakier ground than the peak reached in the period might have suggested.

The strong performance during the quarter was concentrated in U.S. stocks, primarily a handful of big-name technology companies, such as Amazon, Netflix, Apple and Alphabet, Google’s parent company. Markets fell almost everywhere else.

The gap between stock returns in the United States and elsewhere has led some — but definitely not all — strategists to conclude that for U.S. investors, there are better prospects abroad.

“The U.S. is an expensive, frothy market priced to give you terrible forward returns,” said Robert Arnott, chairman of the investment advisory service Research Affiliates, who is seeking opportunities in foreign markets.

Legitimate or not, the divergence between foreign and domestic markets — and how much they cost — accelerated in recent months. The Vanguard FTSE All-World ex-U.S. exchange-traded fund was down 4.9 percent in the year through September, while the SPDR S&P 500 ETF rose 8.9 percent, helped by a 7.2 percent increase in the underlying index in the third quarter. Based on the ratio of share prices to book value, U.S. stocks were more than twice as expensive in September as stocks in the rest of the world, according to Bank of America, a record premium.

Leading the laggards downward were emerging markets, several of which have plunged because of heavy amounts of foreign debt, and Europe, where indexes are heavily weighted in banks that are owed a lot of that money.

The comparative strength of domestic stocks has been justified by the superior performance of the U.S. economy and the presence of so many high-quality, high-growth companies, investment advisers like Golub say. Others, like Arnott, counter that U.S. business prospects cannot be marvelous enough to justify such a cavernous valuation discrepancy, especially over the medium-to-long haul. Foreign markets, especially in the developing world, are bound to bounce back and reward the patience of investors who take a chance on them, they say.

Arnott, for example, highlighted an array of measures showing that U.S. stocks are expensive when compared with their own history or with foreign alternatives, especially in the developing world.

“Emerging market stocks are cheap,” he said. “They have been whacked because of fears that a trade war will do these economies great damage.” With valuations at half the levels of American stocks’ valuations, he said, “they’re reflecting the worst case, not the most likely case.”

Yet emerging market assets may not seem like bargains to anyone familiar with the currency collapses and economic difficulties besetting countries like Turkey and Argentina. Lower stock prices or an extra 3 or 4 points of yield may be small compensation for the possibility of further currency losses or the added risk of default.

But those countries account for a minuscule fraction of emerging stock and bond markets. Other places are on more solid economic and financial footing, although it might take a while before recognition sets in that they’re still moving in the right direction.

“The emerging market story is intact, but you have to have a longer-term focus; emerging markets are still not for the faint of heart,” said Elizabeth Morrissey, managing partner of Kleiman International Consultants. “The best bets in these markets continue to be the ones growing strongly.” Strong, persistent economic growth, propelled in part by young, rising populations, can overcome occasional bouts of weakness in mature economies, policy errors at home, large foreign debts and other unfavorable conditions, she said.

Indonesia, for instance, one of her favorite markets, runs large fiscal and current-account deficits, Morrissey said. The country owes a lot of money to foreign lenders, and its currency, the rupiah, is trading near where it was during the Asian financial crisis of the late 1990s, but economic growth is at a five-year high.

India, another favorite, also runs large deficits and has a weak currency. On top of that, India is “massively oil reliant,” she said. But its economy grew at an 8.2 percent annual rate in the second quarter, driven by the country’s dynamic private sector.

“There are still significant portions of the populations in these countries striving for an iPhone,” Morrissey said. “There’s still a significant growth story.”

The arguments for investing in the United States are strong, too. Measures of consumer and business sentiment are close to all-time highs. The September reading of The Conference Board index of consumer confidence, for example, was the highest since 2000.

If Americans have felt pleased with life and expressed their satisfaction by buying domestic stocks, the past several days notwithstanding, it’s with good reason, Golub said.

He pointed out that the United States has more dynamic businesses than places like Europe. U.S. stock indexes are heavily weighted toward technology companies, while European indexes have a larger proportion of banks, which have been struggling in part because of their extensive exposure to lenders in the developing world.

Fund returns in the third quarter confirmed the outperformance but not by as much as you might expect from the moves in the underlying assets. The average domestic stock fund rose 5 percent, according to Morningstar, led by portfolios specializing in health care, energy and technology. The average international fund gained 0.1 percent, depressed by losses in India and China funds.

The average taxable bond fund returned 0.7 percent in the period.

“The U.S. leadership this year is a reflection of diverging fundamentals in different parts of the world,” she said. “Significant stimulus” — from the Federal Reserve until recently and then from a big round of tax cuts — “has helped lift corporate earnings. I’m not surprised that the U.S. is outperforming by so much this year. I guess the question is: Can the outperformance last?”

It’s a tough one to answer in a world of interconnected economies. Some developments that would worsen conditions at home might cause even greater damage abroad, Patterson said, while favorable domestic developments might provide a greater lift elsewhere.

If the Fed has second thoughts about monetary tightening and turns more dovish, for instance, it could depress the dollar, easing pressures on foreign economies with large debts denominated in dollars. “The rest of the world could catch up,” she said.

By contrast, an acceleration of the slow-motion trade war that has been worrying investors all year — although not enough to put much of a crimp in market returns — would hurt the domestic economy, but it could damp growth to a much greater extent in places like China, she said. A slowdown in China, in turn, would have a more serious impact on Europe than the United States.

Another potential impediment to European markets, Patterson said, is the imminent start of a monetary tightening cycle by the European Central Bank. The Fed has been far more hawkish on inflation, but its European counterpart may soon join it in raising interest rates and selling assets acquired in its quantitative easing program.

With such prospects, she prefers to maintain a particularly high allocation to domestic stocks. But favorable moves on the trade front would persuade her to put more into emerging markets, particularly China.

Golub contends that investors have “almost an obsession with what could go wrong” for U.S. stocks, although he acknowledged that “if people were really cautious, the market wouldn’t be going up” as it did in the third quarter.

He also highlighted a number of factors that are “a risk but not a problem,” including inflation, the elections next month and the trade backdrop. He said that valuations are not cheap and that long-term returns could suffer for that.

“There is an unbelievable number of potential threats to the stock market, but none of them are derailing the market yet,” Golub said.

The last word in that quote might worry some investors, especially lately, but he recommends owning some of the highest of fliers, including technology stocks that focus on consumer services, such as Priceline and Amazon, and on communication services, including Netflix, Alphabet and Facebook. He also favors financial companies.

If there are risks but not problems in the United States, as Golub put it, Nick Kaiser, manager of the Sextant International fund, finds problems but not as much risk overseas.

“There are more opportunities in foreign markets than domestic,” Kaiser said. Even a country like Argentina “is a great place to invest,” he said, as long as the money is put to work in stocks when they trade at low valuations, and not bonds, which are far more susceptible to inflation.

His strategy is to look for high-quality companies, even if the quality of the economy in places where they do business may be suspect. An example in Argentina is MercadoLibre, an online retailer that operates across South America.

“We see a lot of opportunities in Europe,” he said, “but there may be more in Argentina and Brazil.”

Arnott likewise sees a world full of healthy investment prospects. He finds it easier to list what he would avoid than what he would buy.

“There’s a richer spread of opportunity than usual, just not in the U.S.,” he said. “You just need a little upside surprise and you’ve got a bull market.”