US Navy sailor on board Norwegian frigate that sank after collision 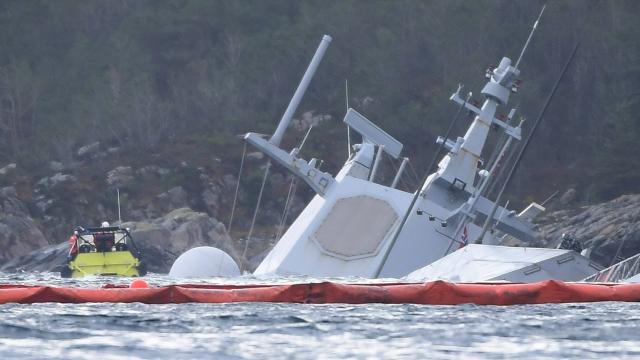 (CNN) — A US Navy sailor was serving as an exchange officer onboard the Norwegian naval frigate that was struck by a freighter and has now almost entirely sunk, according to the US. Navy and the Norwegian Ministry of Defense.

The Norwegian government's Accident Investigation Board is investigating the incident, and the US has been informed that the American sailor may be part of that investigation. The sailor has not been identified, and his exact role on the ship is unknown.

A large hole was torn into the side of KNM Helge Ingstad when it collided with a Malta-registered oil tanker, Sola TS, in the early hours of November 8.

The frigate, one of five in the Scandinavian country's navy, had been moving around inner fjords in western Norway for navigation training before it collided with the 250-meter long tanker (820 feet) that was sailing out of an oil terminal.

While military crew reportedly drove the vessel up on underwater rocks to prevent it from sinking, the tanker emerged relatively unscathed.

But efforts to move the 5,500-ton warship to a safe place went catastrophically wrong this week after cables attached to hold it in place snapped.

Now all that remains above the waterline is the frigate's top, antennas and radar, leading local media to speculate how a ship designed for war failed to avoid a slow-moving 150,000-ton tanker.

AnnKristin Salbuvik, a spokesperson for Norway's Ministry of Defense, said the American officer was onboard Helge Ingstad as a part of an exchange program between the two countries' navies.

Cmdr. Kyle Raines of the US Navy's 6th Fleet said in a statement: "The US Navy has an officer assigned to the Personnel Exchange Program (PEP) with Norway as part of the crew of the KNM Helge Ingstad.

"Because of privacy interests, we are not at liberty to identify this officer by name."

The Washington Post first reported the sailor could face questioning.

Norway's military has remained tight lipped about the situation, which injured eight of the 137 people on board. Navy communications officer Torill Herland told CNN that whatever occurred during the accident near Bergen is now "police work."

A joint Norwegian and Maltese investigation is now also underway to try to determine the cause.

Similar cases involving US Navy destroyers over the last two years were found to have been down to avoidable errors, according to Alex Pape, Editor of Jane's Fighting Ships, but he said it is too early to speculate on this incident.

"However, even for well protected warships, if they sustain sufficient damage, particularly in adjacent compartments and below the waterline, the resulting flooding may be too much for pumps and/or the crew's damage control efforts to cope with, and the ship will list, capsize or sink.

Pape said this particular incident suggests that in addition to a visible large hole torn in the starboard side, there is substantial damage to the hull near or below the waterline, which then rapidly flooded the aft compartments of the ship.

The attempted rescue of the frigate has certainly raised eyebrows.

Jan Vindenes is the general manager of Sotra Anchor & Chain, whose products have been used in numerous shipwreck recoveries, including that of the Costa Concordia -- the cruise ship which crashed into rocks off the coast of Italy in 2012, killing 32 people on board. He thinks chains could have been used to secure the frigate.

"They used some wire to secure the frigate, but unfortunately it snapped. We say that chain is stronger and better than wire."

"We have chain that can hold 2,000 tons, and our chain was used to raise the Costa Concordia, which was very much bigger than this frigate" he added.

Given that the frigate is one of only five operated by the Norwegian navy, its loss is likely to impact on national and NATO operations. But the country's military will have to carefully consider the cost of salvaging and repairing it for active service.

Pape told CNN: "Curiously, if the ship is not repaired, the reduction of one ship that needs to be maintained, upgraded, manned and used over the remaining 20 years of its life will mean that cost for the navy could go down in the long run, however with a loss of capability."

Pape estimates that a decision to salvage it, repair it, and return it to service would cost hundreds of millions of dollars. "The total cost could be similar to the cost of a new ship."

The financial impact of the crash is likely to be felt well beyond the military, as it triggered the shutdown of a North Sea crude export terminal, Norway's largest gas processing plant and several offshore fields.

In total, these five oil and gas fields produce around 400 million Norwegian krone ($48 million) a day or 17 million krone ($2 million) an hour. Since the oil companies pay 78 percent taxes to the state for production, the two-day shutdown ultimately resulted in a substantial economic loss for the nation, national broadcaster NRK reported.

Fortunately the oil tanker -- which was carrying almost 100 million liters of oil -- was not seriously damaged in the accident. The Norwegian Coastal Administration said it had cleaned up some diesel and helicopter fuel that was spilled in the incident, but that has been largely contained, according to Truls Gulowsen, head of Greenpeace in Norway.

"A major leakage would have constituted an unbelievable environmental disaster that easily could have impacted most of Norway's western coastline," Gulowsen told CNN.

The crash led to a small amount of diesel and 10,000 liters of helicopter fuel to leak from the vessel, which has largely been contained and recovered, he said.

Gulowsen added however that, "the situation is not yet stable and the vessel is still under water. The frigate had additional 385,000 liters of marine diesel, but this has not leaked,"

The Norwegian Navy is now considering ways to raise the vessel, according to the military's chief of staff, Admiral Nils Andreas Stensones.

"It's very hard for a navy to lose a vessel," he told AFP.