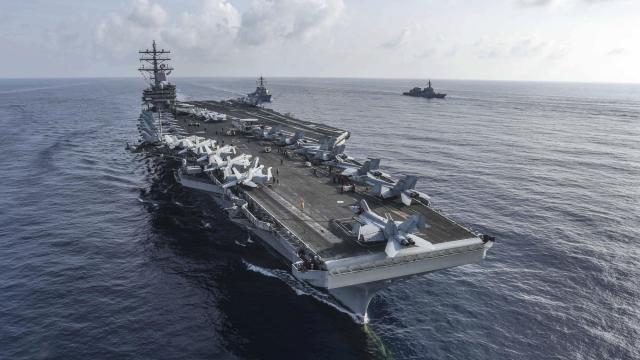 BEIJING — A U.S. Navy warplane crashed into the sea northeast of the Philippines on Monday, the second crash in less than a month involving aircraft from the carrier the USS Ronald Reagan.

The aircraft, an F/A-18 Super Hornet, had a mechanical problem during routine operations over the Philippine Sea in the Western Pacific, the Navy’s 7th Fleet said in a statement. In October, an MH-60 Seahawk helicopter, also assigned to the Ronald Reagan, crashed shortly after takeoff, injuring a dozen sailors.

The two aviators in the jet Monday were plucked from the sea and brought back to the carrier in good condition, the Navy said.

The crash was the latest mishap for the 7th Fleet, the largest U.S. fleet deployed overseas, and a moment of reckoning for the Hornet, a naval aviation workhorse that some officials have warned has become too popular for its own good.

A hint of possible problems with the jet came from Gen. Robert B. Neller, commandant of the Marines, in January.

“We need to get rid of them,” he added, “because we don’t have time to fix them.”

According to the Navy, a new F/A-18 Super Hornet costs $57 million.

Last year, two of the 7th Fleet’s commanders were forced out after two collisions between Navy destroyers and commercial ships resulted in the deaths of 17 sailors.

Navy investigators concluded the collisions were “avoidable” and resulted from a series of crew and basic navigational errors.

“Many of the decisions made that led to this incident were the result of poor judgment and decision-making of the commanding officer,” officials concluded in a report on the June 2017 collision between the destroyer the USS Fitzgerald and a container ship near Japan in which seven Navy sailors died.

After the results of the inquiry were made public, Sen. John McCain, R-Ariz., then chairman of the Senate Armed Services Committee, said automatic budget cuts to the Pentagon since 2013 were among the reasons for the 17 deaths.

The F/A-18 Super Hornet that crashed Monday is one of the most widely used strike fighters in the Navy, employed for reconnaissance, close air support and precision strikes.

The Seahawk that crashed last month is a twin-engine assault helicopter used for submarine warfare, search and rescue and anti-ship warfare. In the accident in October, the helicopter crashed onto the deck of the carrier.