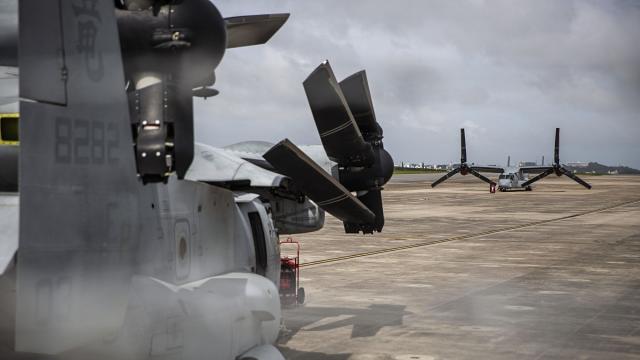 TOKYO — Denny Tamaki, the son of a Japanese mother and a U.S. Marine, became the first mixed-race governor in Japan on Sunday after winning a close election in Okinawa, a southern archipelago heavily populated by U.S. military installations.

His victory poses a setback to plans by the Japanese government and the United States to transfer a busy Marine air base on Okinawa from the city of Ginowan to a less-populated coastal area on the island.

Tamaki wants the base moved out of Okinawa altogether. His opponent, Atsushi Sakima, who was backed by Japan’s ruling Liberal Democratic Party, was until recently the mayor of Ginowan and supported the base’s transfer.

Tamaki, 58, succeeds Takeshi Onaga, an outspoken critic of the U.S. bases, who died in August from complications of pancreatic cancer.

Speaking after NHK, the public broadcaster, confirmed his victory, Tamaki told supporters at his campaign headquarters that he would carry on the legacy of his predecessor in opposing the Japanese government’s effort to build the new base.

“We have to know that even small ants can move an elephant’s foot,” Tamaki said.

Tamaki, who nine years ago became the first Amerasian to be elected to Japan’s House of Representatives, said he would not grant approval for landfill to be used in the construction of a new runway in Henoko, a fishing village on the northern coast of the main island of Okinawa, to facilitate a new air base.

According to an agreement signed between the American and Japanese governments, the new base would replace the Marine Corps Air Station Futenma that sprawls across about 1,100 acres in the center of the city of Ginowan on the southern half of the island, which is about 650 miles south of the Japanese mainland.

Okinawans have long protested the presence of the U.S. military, complaining of noise, violence and aircraft accidents. There are 33 U.S. installations on Okinawa, and about 25,000 troops — half of all the U.S. troops in Japan — are based there.

Tamaki faces considerable challenges, however, in getting the base off the island. Prime Minister Shinzo Abe could push Japan’s Supreme Court to overturn any legal objections Tamaki raises to the new base.

The new governor will also have to wrestle with Okinawa’s high poverty rate and its heavy dependence on subsidies from the central government in exchange for hosting the bases.

“The prefecture has not spent enough on education and development, and that has resulted in poverty,” said Manabu Sato, a professor of political science at Okinawa International University. “Any opposition to U.S. military presence could be suppressed with the threat of withdrawing the money.”

At the same time, coming less than a month after Naomi Osaka, the daughter of a Japanese mother and Haitian-American father, won the U.S. Open women’s tennis championship, Tamaki’s victory suggested that Japan might be opening, just a little bit, to more racial diversity.

“It all helps broaden the discussion of what it means to be Japanese,” said Alexis Dudden, a professor at the University of Connecticut who specializes in the modern history of Japan. “And it broadens the reality of being Japanese, at a time when some voices would have a very old-fashioned notion of Japanese ethnicity.”

Lima Linda Tokumori, 31, a nonprofit employee who voted for Tamaki, said she supported him in part because of his mixed roots, which she said reflected the background of many Okinawans.

The election result surprised some analysts who had expected the Tokyo-backed Sakima to pull ahead after several influential politicians from Abe’s ruling party visited Okinawa to campaign for the candidate.

Analysts said the Okinawa result was an embarrassing political defeat for Abe.

The Liberal Democrats “really were doing all they could, leveraging their national clout and budget and promises,” said Koichi Nakano, a political scientist at Sophia University in Tokyo. “The fact that they couldn’t win in spite of that is quite a disaster.”