U.S. and Brazil Chose Similar Leaders. It May Lead to Smoother Relations. 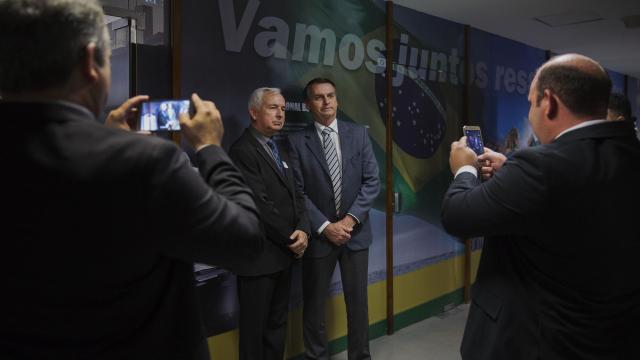 RIO DE JANEIRO — The United States and Brazil have been uneasy allies during the best of times.

But Brazilian voters may have put an end to that dynamic by electing as their next president Jair Bolsonaro, a far-right lawmaker who is unabashedly pro-American and strikingly similar to President Donald Trump in temperament, tactics and style.

“We might be on the verge of a golden era of relations,” said Fernando Cutz, a former senior White House official who worked on Latin America policy in the Obama and Trump administrations. “Trump and Bolsonaro will really hit it off. Their personalities are almost identical and their policy views are very similar.”

Bolsonaro’s enthusiasm for closer ties with the United States is among the starkest signs that Brazil’s foreign policy is about to undergo profound changes.

As a candidate, the incoming president denounced the alliances and foreign policy of the leftist Workers’ Party, which governed Brazil from 2003 to 2016. During that period, Brazil fostered close commercial ties with China, championed Cuba’s authoritarian government and was a pillar of multilateral alliances that excluded the United States.

Bolsonaro has yet to outline a detailed foreign policy vision, but he recently unveiled his pick for foreign minister: Ernesto Araújo, a midlevel diplomat who heads the United States and Canada department at the Foreign Ministry and shares his admiration for Trump. In his blog, Araújo has called climate change a Marxist plot and praised Trump for combating the “globalism” movement led by China.

In recent interviews, Bolsonaro has suggested that Brazil could relocate its embassy in Israel from Tel Aviv to Jerusalem, following a similar move by Trump, and raised the possibility of severing diplomatic relations with Cuba.

His team’s priority, though, is clearly to build a strong partnership with the Trump administration. Key surrogates have begun a charm offensive that appears designed to burnish the international image of Bolsonaro, who became notorious as a lawmaker by insulting minorities and praising Brazil’s military dictatorship.

“Our future president has been accused of a lot of things, but I can assure all of you that he is a democrat,” Bolsonaro’s running mate, retired Gen. Hamilton Mourão, told Fox News in a recent interview. He expressed confidence that relations between the United States and Brazil — the largest nations in the Americas — “will be tighter during this period.”

One of the president’s sons, Eduardo Bolsonaro, a federal lawmaker, plans to travel to the United States soon for what he called “a preliminary effort to reach out and generate goodwill between Brazil and the United States, two friendly nations that drifted apart in recent years for ideological reasons.”

Brazil’s new president and his son are certain to get a warm reception in Washington. Jair Bolsonaro and Trump both rose to victory by running social-media-powered insurgent campaigns that took aim at the political establishment. Both were initially regarded by political analysts as too inexperienced and boorish to pull ahead. And both appear to relish escalating, rather than defusing, political fights.

Trump’s national security adviser, John Bolton, recently applauded the election of Bolsonaro, whom he called a “like-minded” leader. The Trump administration has expressed hopes that a crop of new conservative heads of state in Latin America will help the United States undermine the leftist governments of Cuba, Venezuela and Nicaragua, which Bolton called “the troika of tyranny in this hemisphere.”

Bolsonaro’s rise comes as the patchwork of alliances of leftist governments created at the turn of the century in a bid to end Washington’s hegemony in the region have largely disintegrated. Venezuela, which was a key axis of that network, has become a regional pariah under President Nicolás Maduro, whose mismanagement of the economy has led to an acute shortage of food and medicine.

The humanitarian crisis there, which has caused an exodus of more than 3 million people, is likely to be at the top of the agenda with the United States when Bolsonaro takes office. “If prodded by the United States, Brazil could take a stronger public stance against the Maduro regime, using the influx of refugees as its excuse to act,” said Jana Nelson, a former State Department official who worked on Brazil policy. “The main challenge would be convincing other countries in Latin America to work with the Bolsonaro administration, whose reputation as a harsh nonpolitically correct leader precedes him.”

Bolsonaro has already picked a fight with Cuba. Havana announced that it was recalling the more than 8,000 doctors deployed to remote and poor regions of Brazil after Bolsonaro accused the communist government of treating health professionals like slaves.

And as a candidate, Bolsonaro visited Taiwan, angering Beijing, which considers the island part of its territory. He also raised alarm at China’s growing influence in Latin America, expressing unease at the prospect of letting Chinese companies buy significant stakes in Brazilian state companies.

That wariness puts him in sync with the Trump administration, which is pushing back on the approach China has taken to investing in and lending money to developing economies.

However, analysts said Bolsonaro would have limited leverage in blunting China’s interests in Brazil without angering key constituencies that have come to depend heavily on the Chinese market. China overtook the United States as Brazil’s top trading partner roughly a decade ago; Brazil’s economic growth hinges largely on expanding and diversifying its commercial relationship with Beijing.

Oliver Stuenkel, a professor of international relations at Fundação Getulio Vargas university in São Paulo, predicted that Bolsonaro will come to recognize that maintaining close relations with China is crucial for Brazil.

“Close ties to the U.S. don’t promise the same financial rewards,” Stuenkel said. “China won’t make Brazil choose Washington or Beijing as long as certain lines aren’t crossed. The Chinese don’t want love or open admiration, but someone they can count on not to be hostile.” A new era of closer cooperation between the United States and Brazil could create “a big opportunity to do things with a government that walks and talks and sounds like the one here,” said Thomas Shannon, a former top State Department official who served as ambassador to Brazil.

That could include a significant expansion of trade, broader security partnerships and increased cooperation on medical and scientific research, Shannon said. But he said there was good reason to be skeptical that the Trump administration would seize the opportunity.

“What worries me, quite frankly, is that we won’t do things in a big strategic way,” he said. Instead, the United States could “just try to get them to help us on Venezuela or Nicaragua and then walk away.”

The White House and the State Department did not respond to a request for an interview about the Trump administration’s outlook on the Bolsonaro era.

Matias Spektor, another international relations professor at Fundação Getulio Vargas, said Brazil and the United States had last forged a strong and durable partnership in the 1940s, when President Franklin D. Roosevelt persuaded the Brazilian government to turn on Nazi Germany and join the alliance that won World War II.

After democracy was restored in Brazil in the mid-1980s, following a 21-year military dictatorship that began with a coup backed by Washington, much of the political left in Brazil regarded the United States with suspicion and resentment.

Another low point came in 2013 when the government of President Dilma Rousseff, a leftist, reacted angrily to the revelation that the National Security Agency had been spying on her and other senior Brazilian officials.

Over the years, attempts to improve relations have faltered because the matter was either not a priority for the U.S. government or politically expedient in Brazil.

“Historically it has been very hard,” Spektor said. “You have to have conditions for alignment that are very specific.”

“We have better relations than we used to have, more capabilities,” he said. “That can only improve.”

A full-throated endorsement by Bolsonaro might have given past U.S. administrations pause because of concerns about his commitment to democratic principles and human rights. But Cutz said there was little reason to believe the Trump administration would have reservations.

“There is an argument to be made that if the United States quickly embraces Bolsonaro, we can help shape him,” said Cutz, who was born in Brazil. “If we keep our distance, he is on his own.”