U.S. Allows Some Members of Migrant Caravan to Apply for Asylum 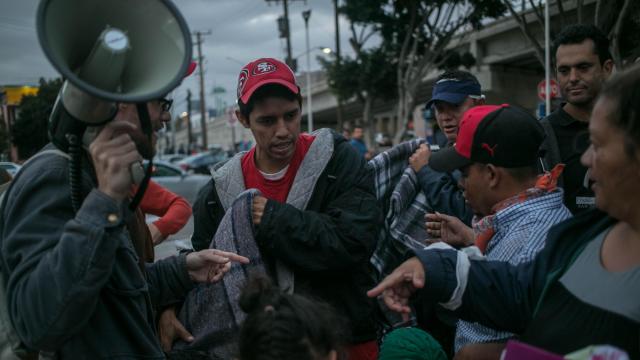 TIJUANA, Mexico — Several members of the Latin American migrant caravan that has enraged President Donald Trump were allowed to step onto U.S. territory to apply for asylum late Monday, ending a border standoff that had lasted more than a day and marking the beginning of the final chapter of the group’s monthlong odyssey.

Shortly after 7 p.m. local time, eight migrants who, like most of the caravan’s participants, said they were fleeing violence in their homeland, passed through the metal gate separating Tijuana from San Diego, entered the immigration checkpoint and began the process to petition for sanctuary, caravan organizers said.

The contingent that was admitted included four children and three women — the children’s mothers — and an 18-year-old man. The organizers said they did not know whether more of the migrants would be permitted to enter Monday night.

The news was greeted with a guarded sense of relief by the caravan’s participants, many of whom had been hunkering down for more than a day in a makeshift encampment at the entrance to the border crossing waiting for the logjam to break.

“On one hand, I’m very happy that it’s finally beginning, that perhaps they will start to accept us little by little,” said Orfa Marín, a Honduran immigrant who has been traveling with her three children and her partner and was not among the first group to pass into the United States. “But on the other hand, we have to wait here until it’s our turn. It could be days.”

The stalemate began Sunday afternoon when Customs and Border Protection, the arm of the Department of Homeland Security that regulates ports of entry, announced that it temporarily had no more capacity to process asylum-seekers at its San Ysidro border entry in San Diego, which abuts Tijuana. 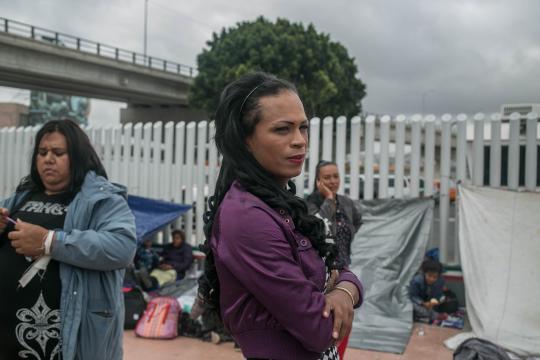 Still, about 200 migrants from the caravan who intended to seek asylum — accompanied by other caravan participants, supporters and dozens of journalists — set off in a procession from downtown Tijuana to the El Chaparral border crossing, setting up the standoff.

Denied entry to United States to make their case for sanctuary, the migrants, nearly all of them from Central America, settled down in the pedestrian plaza in front of the Mexican border entrance.

As the cold night fell, they unpacked the few warm clothes they carried in knapsacks and plastic bags, huddled under donated blankets and ate sandwiches distributed by volunteers. By daybreak, they had strung up plastic tarps to shield them from the sun and rain, and vowed to stay until the asylum-seekers among them were permitted to step on U.S. soil and petition for protection.

On Monday evening, Trump posted a message on Twitter saying that the caravan was “openly defying our border” and showing the weakness of the nation’s immigration laws.

Asylum-Seekers in Migrant Caravan Are Stalled at U.S. Border

The caravan’s organizers said that the migrants were a hardened group and that the wait, however uncomfortable, was a minor challenge compared with the challenges they had already endured — in their homelands, where they faced violence and poverty, and during their strenuous trip north.

“This is the least of their suffering,” said Irineo Mujica, Mexico director of Pueblo Sin Fronteras, the transnational advocacy group that organized the caravan. 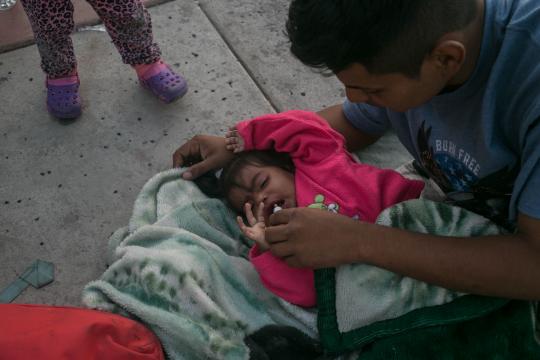 The caravan began on March 25 in Tapachula, a city on Mexico’s southern border with Guatemala, and it quickly grew to include more than 1,200 migrants. Such mass migrations, which have become something of an annual tradition in Mexico, provide migrants with safety in numbers while giving advocates a platform to air their criticisms of regional migration policies.

This caravan, in part because of its extraordinary size, came to the attention of Trump, who in a barrage of messages on Twitter in early April said that the caravan threatened the security and sovereignty of the United States. He also accused Mexico of doing little to stop illegal migration.

Undeterred, the caravan continued north, its participants traveling atop freight trains and by hitchhiking, sleeping in gritty migrant shelters and parks and eating poorly. Hundreds dropped out along the way, choosing to travel on their own or remain in Mexico.

More than 300 participants arrived in Tijuana last week and were joined in recent days by supporters from Mexico and the United States, including scores of volunteer lawyers and paralegals who have converged on this border city to provide free consultations to the caravan’s participants. 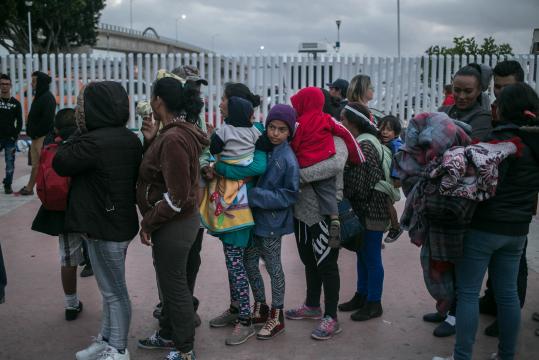 The organizers and lawyers identified the strongest asylum cases — about 200, most of them children — and encouraged those people to apply for protection, while suggesting that the remainder seek protection in Mexico or elsewhere in Latin America.

To qualify for asylum, applicants must prove that they have been persecuted or fear persecution based on their race, religion, nationality, political belief or membership in a particular group. People who request protection at a U.S. entry point must submit to a screening by an asylum officer, called a credible-fear interview. If the officer finds the fear credible, the case is then referred to an immigration judge for a full hearing.

But until late Monday, none of the asylum-seekers among the caravan had been allowed by border officials to begin the process.

Migrants’ advocates had accused the Trump administration of engaging in brinkmanship for political gain at the asylum-seekers’ expense. 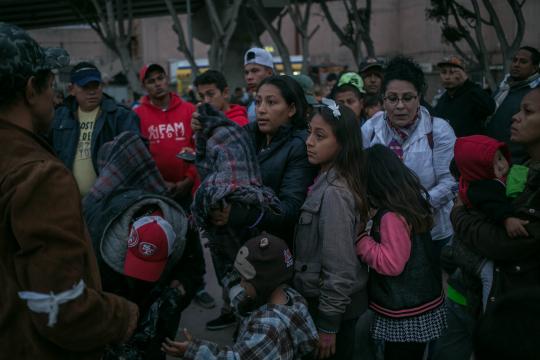 In a statement late Monday announcing the resumption of asylum processing at San Ysidro, Customs and Border Protection officials explained that the number of unauthorized people they can process at border crossings depended on a range of factors including the complexity of cases, translation requirements, detention space and the number of migrants.

“As in the past when we’ve had to limit the number of people we can bring in for processing at a given time, we expect that this will be a temporary situation,” the statement said.

During the delay, most of the migrants adopted mindsets of hardened patience. “Really, nobody’s said anything,” said Arnaldo Rivera, 40, who fled his native Honduras with his wife and five children after the family was threatened by a gang. They were among the migrants who were waiting outside the entrance to the border crossing on Sunday, eating donated food and using a nearby public bathroom.

The family had staked out a patch of the pedestrian plaza by spreading out a blanket and demarcating it with a few knapsacks containing their belongings.

“It could be this afternoon, it could be tomorrow,” he said, shrugging. “God has the last word.”

Late Sunday, local, state and federal authorities tried to persuade the migrants to decamp from the pedestrian plaza and spend the night in shelters. But in an act of communal defiance, the caravan’s participants elected to remain where they were. As the officials walked away, the migrants applauded and cheered.

“We’ve experienced a lot and this isn’t going to stop us,” said Shannel Smith, 29, who fled gang violence in Honduras and is one of about 35 transgender migrants in the caravan.

Smith was part of a delegation of about 50 migrants who were selected by the lawyers and caravan organizers to approach the U.S. border entry on Sunday afternoon and test the authorities’ claim that they had no capacity to process asylum petitions.

But no members of that group, many of them children, were allowed to pass through the gate. Some decided to remain there for much of the night, corralled behind metal barricades and huddled under blankets on the cold cement pavement, maintaining pressure on the U.S. government.

More than 24 hours after they arrived, eight members were finally invited to step through the gate.