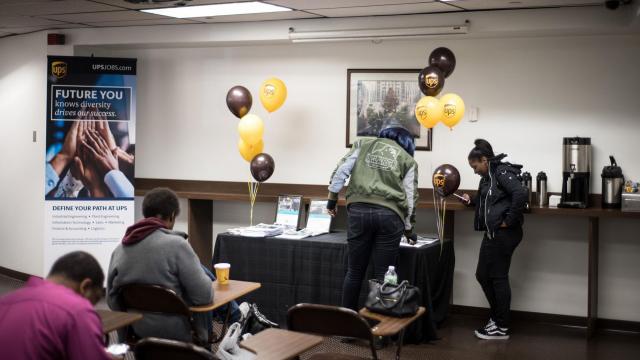 The last official snapshot of the economy before Americans vote Tuesday offered another reminder of the labor market’s persistent strength. Hiring is up. Wages are up. The total number of workers and job searchers is up.

“It’s really the strongest part of the broader economy at the moment,” Michelle Girard, chief U.S. economist at NatWest Markets, said of the labor market.

A swerving stock market, tariffs and weakening growth in other countries may be causing agita, but they have done little to dent economic momentum in the United States. Employers added 250,000 jobs in October, extending a record streak of growth to 97 months, the Labor Department reported Friday.

The economy has historically not played an outsize role in midterm elections, and this political season, border control, health care and Brett Kavanaugh’s nomination to the Supreme Court have gobbled up airtime and political ad space. Still, about three-quarters of registered voters say the economy is “very important” in determining their vote, according to polls conducted by the Pew Research Center. Among Republicans, that number is even higher at 85 percent.

“Jobs and the economy” was also cited more frequently than other issues as the most important in a survey conducted in early October for The New York Times by the online research platform SurveyMonkey.

A recent string of reports suggests both are in good shape. Last week, the government estimated that the economy grew at a hearty annualized rate of 3.5 percent in the third quarter. Confidence remains high among consumers and business leaders. Over the past year, employers have added an average of 210,000 jobs a month.

Friday’s roundup also offered evidence that sidelined workers are not only feeling optimistic about job prospects but are actually finding work, which is why the jobless rate was unchanged at 3.7 percent even as employers hired people. An estimated 711,000 people joined the labor force last month. President Donald Trump, on Friday, called the numbers “tremendous.”

A modest monthly wage gain of 0.2 percent nonetheless produced a surprisingly big 3.1 percent jump in annual growth. That was partly because of an unusual drop in pay in October last year after hurricanes. Yet even if the year-over-year increase was somewhat inflated, the underlying trends point to a pickup in wage growth.

Some analysts saw warnings of inflation, but others said the pay increase should not bother policymakers at the Federal Reserve. “I don’t think it’s something the Fed should worry about,” Girard said. “Productivity growth is picking up, and workers should earn more. It doesn’t mean companies have to pass on higher wage costs to consumers. They can afford to pay them more.” The Fed, which has increased rates three times this year from historically low levels, is expected to raise them again to 2.5 percent in December as a hedge against inflation.

Trump has called the Fed “loco” and “out of control” for raising interest rates, and blamed it for the recent drop in stock prices and for potentially derailing the economy.

In a call with reporters, Kevin Hassett, chairman of the president’s Council of Economic Advisers, cited productivity growth as the explanation for higher wages, and not an overheating economy. He also took the opportunity to say that the president respects the Fed’s independence.

As always, the monthly jobs report captures only a particular moment; the underlying trend is what’s important. That caution is particularly pertinent this time.

The back-to-back hurricanes in September and October may have distorted the data in unpredictable ways. “It looks good, but it’s never happened before when you have hurricanes making landfall in successive survey weeks,” said Ian Shepherdson, chief economist at Pantheon Macroeconomics.

Manufacturing jobs — which have traditionally paid well and have been a focus of Trump’s policies — increased by a healthy 32,000.

Here, too, Shepherdson advised skepticism, noting that the Institute for Supply Management reported this week that its manufacturing index had fallen to a six-month low amid worries about tariffs, shortages of parts and a drop in global demand.

“If I were a Republican politician, I would be shouting about it,” Shepherdson said, referring to manufacturing. “But there’s no way that growth is going to continue.” Manufacturing sectors in China, in particular, and Europe are weakening sharply. Producers, he said, are worried about “tariffs, tariffs, tariffs.”

October’s figures will be revised twice more, and September’s once more.

Although the unemployment rate has consistently surfed below the levels reached in 2000, at the height of that expansion, wages have been growing at significantly slower rates.

Low wages in many sectors have contributed to financial instability. More than a quarter of Americans don’t earn enough to cover basic expenses, while more than a third are unable to pay all their bills on time, according to a report released Thursday by the Center for Financial Services Innovation, which is funded by nonprofit foundations and several banks. That shortfall has contributed to mounting credit card debt and loan defaults.

October’s report, however, is among several recent signs that wage growth is gathering steam.

According to a report last week from the research arm of the payroll processing firm ADP, American workers are earning nearly $1 more per hour on average than they were a year ago. Protolabs, a digital manufacturing company based in Minnesota, hired 50 people last month, bringing the year’s total to 340, a pace it expects to match in 2019, said Renee Conklin, vice president for human resources. But the competition for workers is becoming stiffer. “We’re seeing more employers making counteroffers to retain people,” Conklin said.

Since the recession ended, analysts have struggled to understand how many more potential workers are out there. Before the financial crisis, more than 66 percent of the population 16 or older was working or looking for a job. In recent years, that number — the labor-force participation rate — has rarely risen above 63 percent.

Many of those missing workers will never rejoin the labor force — some have reached retirement age, others have seen their skills lose value, and a number are too disabled to work.

Economists continue to argue about how many more people could be lured back to the labor market. Rising wages are certainly one attraction.

Women are coming back into the workforce at a much faster rate than men, however. And over the past year, a net total of 1.4 million women have joined compared with 845,000 men. Drawing in even more women would require better child care, paid parental leave and more flexible hours, said Betsey Stevenson, an economist at the University of Michigan. “We know what to do for women,” she said. “We’re really at a loss as to what to do to induce more men back.”

Job opportunities are also rippling out to groups that were largely bypassed during much of the recovery: African-Americans, Hispanics, less-educated workers and people with disabilities have all seen their unemployment rates drop in recent months.

Employers say they are constantly on the hunt for workers. “I speak to probably a thousand businesspeople a month,” said Rick Lazio, a former Republican congressman who is a senior vice president at Alliantgroup, a tax-credit consulting firm. Midsize manufacturers are turning down lots of business, he said, “because they can’t find the people and they can’t get the equipment fast enough.” Help is not coming from abroad: The number of immigrant visas issued by the government has declined for two years in a row.

Worries about fierce competition for holiday hiring have prompted employers to be more aggressive, putting offers out earlier than usual and raising wages, recruiters said.

United Parcel Service has said it plans to hire 100,000 seasonal workers. Several applicants for packing or delivery positions who showed up at the company’s hulking customer center in Manhattan during a recent nationwide hiring drive said they hoped temporary stints would turn into permanent jobs. A company spokesman said holiday positions paid $10.35 to $30 an hour, depending on the location.

“I’m just praying,” said Chanique Cox, 42, who did not finish high school. She knocked her knuckles on a wooden counter and clicked her blue nails. “I’m only finding temporary jobs. I would love it if I got a permanent job.”