Tyler Perry lived on this street before he was homeless. A nearby highway sign now bears his name 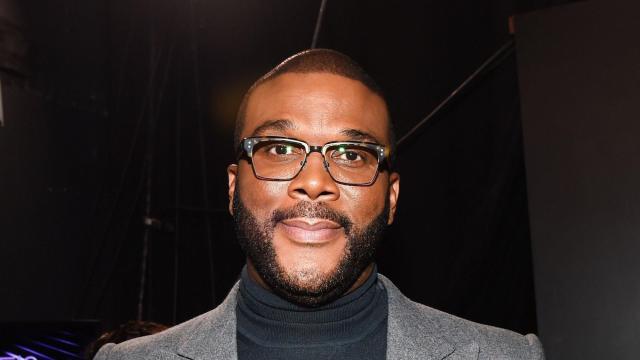 CNN — Tyler Perry is a mega-millionaire now, but he hasn't forgotten where he came from.

The Atlanta filmmaker was driving to work this week when he noticed a sign on Georgia State Route 166 had changed. A green exit sign that once read "Fort McPherson" now says "Tyler Perry Studios."

Then Perry realized something else.

His name was next to the exit sign for Sylvan Road, the street where he lived before he was evicted in the late '90s. Before he made it big, he struggled to make his rent payments and lived out of his car for about three months.

"My eyes filled with water knowing what God has allowed to happen in my life," Perry shared in a Facebook post. "Atlanta has truly been the promised land for me. I came here with nothing, lived off Sylvan Road, ended up homeless and starving, but I was always praying and believing."

Perry's dream didn't come true overnight. It took years of determination and hard work before he got to where he is today.

Here are some reasons why Perry is so beloved.

He broke ground with his character Madea.

The making of the character Madea helped make Perry the successful mogul he is today.

For more than 20 years Perry wore a dress, wig and makeup to portray the elderly, no-nonsense black woman.

He first debuted Mabel Earlene "Madea" Simmons on stage in the play "I Can Do Bad All By Myself" in 1999.

Madea later moved to the big screen, where her movies have grossed hundreds of millions of dollars despite some criticism that the character stereotypes black women.

In March, Perry finally said goodbye to Madea, who he played for 11 films.

"I'll be 50 this year and I'm just at a place in my life where this next 50 I want to do things differently," he told CNN before "A Madea Family Funeral" hit theaters. "This character has been amazing. So many people have loved her. It's been a great franchise."

He gave a powerful speech about Hollywood politics

Perry earned a wave of applause from celebrities like Lena Waithe and Lizzo at the 2019 BET Awards as he received the Ultimate Icon Award.

His roughly three-and-a-half-minute acceptance speech was an oral argument demonstrating his influence over a community's representation in media.

He told the crowd of how he created his own movie and TV projects that depicted black people, rather than fighting for acceptance in a predominantly white industry.

"While everybody was fighting for a seat at the table talking about #OscarsSoWhite, #OscarsSoWhite, I said, 'Y'all go ahead and do that,'" he said. "But while you're fighting for a seat at the table, I'll be down in Atlanta building my own. Because what I know for sure is that if I could just build this table, God will prepare it for me in the presence of my enemies."

He also shared how his mother and her friends became the inspiration for his first few projects.

"My first 10 movies were all about her, subconsciously wanting her to know that she was worthy — wanting black women to know you're worthy, you're special, you're powerful, you're amazing," he said.

His studio could become one of the largest of its kind

Tyler Perry Studios has a story of its own.

It's situated on 330 acres of the decommissioned Fort McPherson, a land that comes with a controversial history.

"The studio was once a Confederate Army base," Perry said at this year's BET Awards. "And, I want you to hear this, which meant that there was Confederate soldiers on that base, plotting and planning on how to keep 3.9 million Negroes enslaved. Now that land is owned by one Negro."

Perry purchased the land in 2015. Tyler Perry Studios is poised to become one of the largest motion picture studios in the country, according to its website.

Fans have been beyond eager to get a shot at appearing in one of Perry's productions. Some have even taken out billboards trying to get hired.

"This is not the way to get my attention if you're looking for a role in one of my shows," he tweeted. "Please DON'T DO THIS, SAVE YOUR MONEY!!"

His compassion for others is a reflection of his life

Perry's desire to give back to others is seen in so many examples.

He has paid off people's Walmart layaways. He saw a CNN report about a church that was in need and donated to help.

It's who he is, and his upbringing played a big role in that.

Born Emmit Perry Jr., Perry changed his name to distance himself from his father who beat him and his mother. Perry forgave him in his mid-20s after learning about his father's abusive childhood.

"If you do not forgive, you hold on to this thing inside of you that can change your life and take you in the wrong direction," he told Piers Morgan in 2012.

He remembers what it's like not to have food and a roof over his head.

"It was character building," he told Larry King in a 2009 interview about being homeless.

It wasn't until his sold-out gig at the House of Blues in Atlanta in 1998, the seventh year of trying to make a name for himself as a playwright, did his career turn around.