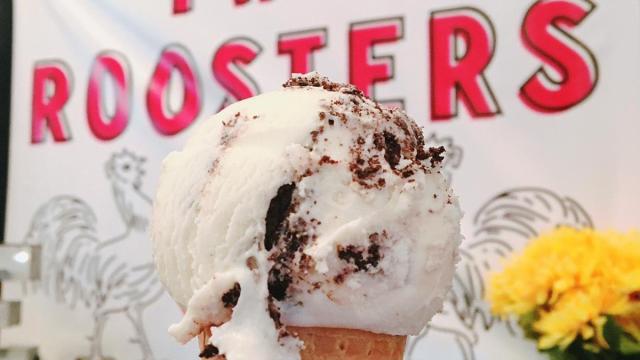 Two Roosters, which won the best ice cream award last week, announced that it will be opening a shop at the Golden Belt Campus next to Hi-Wire Brewing in Durham.

"You guys won't believe this space! Our newest set-up will be in a historic building, adjacent to a huge grassy area and outdoor stage. The best part? Our rooftop patio overlooking it all! 🙌 Fingers crossed we'll be open mid-spring; we'll keep you posted," owner Jared Plummer posted on the company's social media pages Tuesday.

Two Roosters started with a turquoise blue ice cream truck at The Cookery in Durham in 2014 and has grown to two stores in Raleigh, with locations in the Person Street Plaza and the Greystone Village Shopping Center.

The shop is known for its 10 "forever flavors" and its unique rotating list of monthly guest collaborations.

"The menu is very strategic," Plummer said on the Out and About Podcast. "Using the food truck experience, there was a lot of flavors that I was able to vet during those years. Naturally, there's a few that popped up that were really popular, so going into the brick-and-mortar arena, I knew there were the regular flavors that were tried and true. People loved them and knew us for those flavors."

Every year, the shop operates in the Got to Be NC tent at the North Carolina State Fair. Last year, it brought back its popular pizza-flavored ice cream.

Two Roosters also has a spot at the Durham Bulls Athletic Park.

Last summer, the shop was named one of America's best ice cream parlors by USA Today.