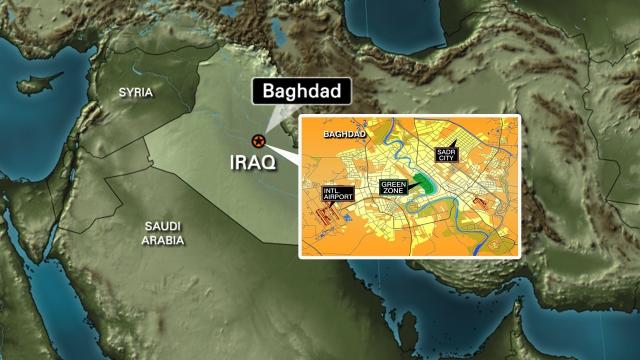 CNN — The US-led coalition to fight ISIS confirmed small rockets landed near the the heavily fortified Green Zone in Baghdad on Wednesday afternoon without causing any damage to coalition troops or facilities.

Col. Myles B. Caggins, a spokesperson for the US-led coalition fighting ISIS, said in a tweet that small "rockets impacted near Baghdad's International Zone, Jan. 8 at 11:45 p.m (local time)." Caggins added that there were "no coalition casualties or damage to facilities."

The Iraqi joint military command had earlier told CNN in Baghdad that "two Katyusha rockets landed inside the Green Zone in Baghdad. No reports of casualties."

The CNN team in Baghdad heard sirens from inside the Green Zone and two explosions. It was not immediately clear who had fired the rockets or where they were fired from.

The rockets landed a day after Iran fired more than a dozen missiles at Iraqi bases housing US troops. The attack on Tuesday from Iran did not cause any US or Iraqi casualties.

In response to the Iranian attack, President Donald Trump said on Wednesday that it appeared the Islamic Republic "appeared to be standing down," but three US officials told CNN that the US currently assess that Iranian proxy forces in the region are still a threat.

One defense official said that a reason for the concern is the fact that subordinate commanders of Iranian backed militias are not highly disciplined. The source said Iranian Gen. Qasem Soleimani -- who was killed in an American air strike last week -- personally worked to keep those forces in line. It is unknown to US officials if Soleimani's successor can keep things under control.

The Green Zone is an area of Iraq's capital city where the embassies for the US and several other western countries are located. It was initially carved out of central Baghdad by US-led forces after their invasion of Iraq in 2003 and is largely viewed as a safe location, despite frequently being the target of rocket attacks.

There have been numerous rocket attacks on the Green Zone and the area surrounding it in recent months. However, the whole of Iraq is on an heightened state of alert as tensions between the US and Iran have dramatically increased over the last couple of weeks

Last week the US embassy in Baghdad was the site of mass protests in response to US airstrikes on an Iranian-backed militia group at the end of last month.

Those strikes were launched in retaliation to attacks by an Iranian-backed Shia militia group known as Kataib Hezbollah, which had injured numerous American military personnel, according to US officials.

In a Wednesday evening briefing, Army Gen. Mark Milley, the chairman of the Joint Chiefs of Staff, told reporters he "fully expect(s)" militia groups with ties to Iran "to conduct terrorist operations against US forces and coalition forces in Iraq and perhaps even elsewhere."

When asked by reporters if Iran is done retaliating for the US killing Soleimani, he replied, "I think it's too early to tell."

At the same briefing, Defense Secretary Mark Esper said proxy groups may conduct attacks "either directed or non-directed by Iran," noting that among the challenges the US faces will be to "sort through that, understand, who's doing it, who's motivating it."