Raleigh, N.C. — Two of the law enforcement officers charged with beating a Raleigh man have been placed on investigatory placement, which is paid leave.

Blake and Davis are now on investigatory placement while authorities continue to investigate.

The incident occurred near the intersection of North Raleigh Boulevard and Yonkers Road when officers responded to reports of a man with a gun yelling at passing cars.

Video from dashboard and body-worn cameras from officers that night show State Highway Patrol troopers and Raleigh police officers initially surrounding an intoxicated Hinton in the middle of the street.

When Broadwell arrives with his K-9, Loki, he immediately puts the dog in the middle of the confrontation.

"Get on the ground or you're gonna get bit," Broadwell yells to Hinton three times before ordering Loki, "Get him, get him, get him."

Dashcam videos show Broadwell hitting Hinton as Loki takes him to the ground.

During the ensuing scrum with several officers, one officer is seen kicking Hinton, while another can be seen punching him as he refuses to give in to law enforcement. No gun was found on or near him. 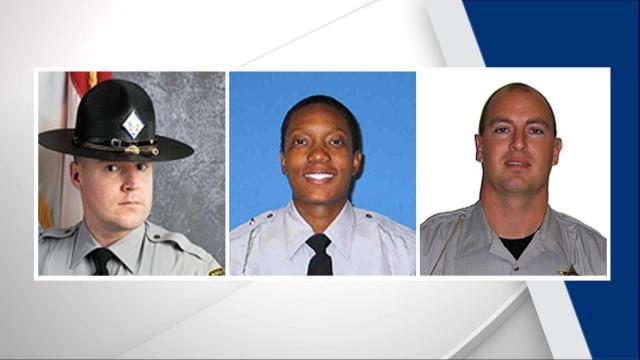 As the struggle to subdue and handcuff Hinton continues, the order comes a dozen more times – rapidly and filled with expletives.

During a news conference on June 3, Hinton's mother said her son has a mental health problem and now suffers from PTSD.