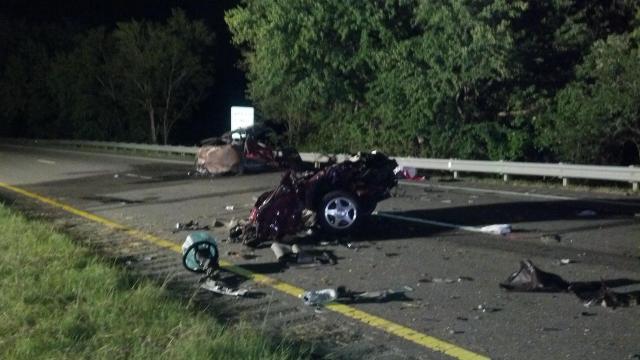 Zebulon, N.C. — A Knightdale man and Durham woman face accusations of drunken driving in connection with a three-car crash that killed a Sanford man on U.S. Highway 64 at the Wake-Franklin county line early Sunday.

State troopers said that Jashauna Kanesha Wilson left part of her 2001 Honda Accord sticking out into U.S. 64 West when she ran out of gas around 3:30 a.m. and pulled onto the right shoulder, near N.C. Highway 39. A westbound 1997 Nissan Altima, driven by Marvin Gerome Lee, 23, struck the Accord at 65 mph, which spun around and was hit from behind by a westbound 2003 Nissan Altima, whose driver, Timothy Richardson Jr., had slowed from 80 mph to 65 mph before impact.

Lee's 1997 Altima split in half and caught on fire, troopers said. He was thrown from the car and died at the scene.

Jarvis Richardson, 31, of Nashville, suffered severe, life-threatening injuries in the crash. Timothy Richardson's cousin, he was thrown from the back of the 2003 Altima through the front windshield, troopers said. He was taken to WakeMed in Raleigh.

Timothy Richardson and his front-seat passenger, Michael Pittman, 33, of Raleigh, suffered non-life-threatening injuries and were taken to WakeMed. Wilson and her passenger and cousin, Britanny Wilson, 20, of Knightdale, were treated for minor injuries at the scene.

Timothy Richardson, 27, of 504 Pine Run in Knightdale, was charged with driving while impaired, and Wilson, 20, of 5639 Old Chapel Hill Road, Apt. 310 in Durham, with underage or provisional DWI.

Troopers said Wilson did not appear impaired at the scene, but tests revealed that she had a blood alcohol content level of 0.05. In North Carolina, it is illegal for anyone under the age of 21 to drive with any BAC level.

Timothy Richardson appeared to be physically impaired at the scene, and the results of his alcohol tests are pending, troopers stated in the wreck report. Results from alcohol and drug tests on Lee were also pending.