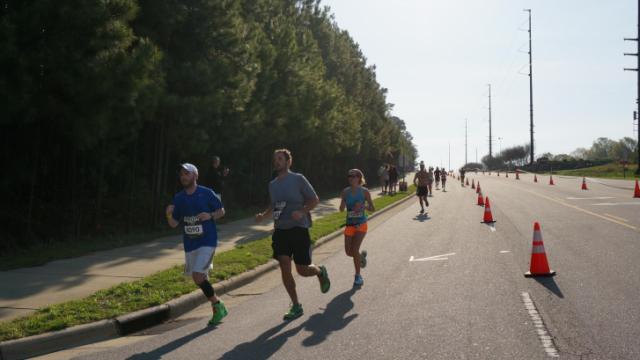 Both men were treated by medical personnel and taken to area hospitals, where they were pronounced dead.

"We are greatly saddened by these tragic losses and our prayers go out to the each of the runner's family and friends," Dr. P.Z. Pearce, medical director of the event, said in a statement. "We have spoken with each of the families and they have asked everyone to kindly respect their privacy during this most difficult of times."

Pearce said the family has requested the names of the men not be released until the causes of death are determined.

Brenda Truman of Seattle wasn’t far from the Dorothea Dix campus when she saw one of the fallen runners.

“At that point, you could see there was an unresponsive man on the ground. They were using paddles and he was intubated. He didn’t look good,” she said.

Truman said she kept running as officers directed everyone to the sidewalk.

“You’re stunned for a moment. Your brain can’t even wrap around it,” she said. Minutes later, she passed another man, also on the ground and unresponsive, swarmed by medics.

“And it was in eyesight of the finish line,” Lamb said. “I just put my hands over my face because at that point, it was very emotional.”

The deaths darkened an otherwise successful event that drew more than 12,500 registered runners 49 states and a number of foreign countries.

Local flavor dominated with the winners of both the men's and women's marathon hailing from Durham. Paul Himberger finished in 2:38: 57, almost 10 minutes ahead of his closest challenger. Heidi Bretscher was the first woman to cross the finish line and was in third place overall. She set a personal best with the 2:49:46.

The event, which included both the 13.1-mile 1/2 and the 26.2-mile full marathon along with bands sprinkled along the route for motivation, was making its debut in the City of Oaks after more than a decade of similar races across the country.

Runners began their trek at Salisbury and Davie streets then wound to the east through Chavis Park and the Oakwood neighborhood before turning back toward downtown. They passed William Peace University and Cameron Village, then the 1/2 marathon course returned to the Fayetteville Street finish line by way of Western Boulevard.

Weather conditions for the race were almost ideal. At the 7 a.m. start, temperatures were in the mid-50s under mostly sunny skies with a slight breeze. Temperatures Sunday topped out at 80 degrees.

Dr. Rob Jones, local medical director, said his team had taken extra precautions to help runners who were not prepared for the heat. The course was hilly, but there were aid stations every other mile to provide ice, cool towels and cold-water immersion baths if necessary.

“Everyone I talked to at each of the stations was very concerned, double-checking, (asking) how are you doing, can I get you a water?” runner Charles Copello said.

Cheryl Parker, a runner from Bahama, said, "There were times I was hot and tired. I think you need to know your body and your temperature, and you've got to stop."

Truman said the weather was hotter than what she had trained for, but it was nothing extreme.

“Other people could construe running as dangerous, or that it was too hot for a race, (but) that really wouldn’t have been the case in this particular instance,” she said.

Wake County EMS, which provided support to the marathon's medical staff, reported checking on 29 runners and a couple of spectators. Of those, 10 needed to be taken to hospitals.

EMS officials said they could not provide more information about specific patients because of medical privacy laws.

There was no indication that heat was a factor in either of the deaths.