Two Democrats Sworn in to Senate, Cutting GOP Margin to One 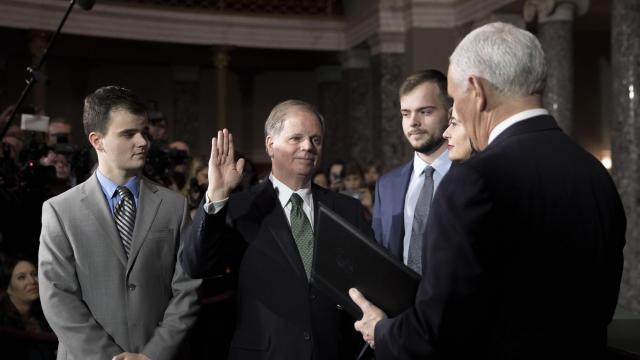 WASHINGTON — Democrats counted their New Year’s blessings Wednesday as two new senators — Doug Jones of Alabama and Tina Smith of Minnesota — joined their caucus, reshaping the balance of power in the Senate after a history-laden swearing-in ceremony attended by three current and former vice presidents.

The arrival of Jones, who replaced a Republican (Smith replaced a Democrat) alters the makeup of the Senate, giving Republicans a one-vote majority of 51-49. That could prove just enough to thwart much of President Donald Trump’s legislative agenda.

It also provided the first tangible boost to Democratic power in Washington since the crushing and unexpected defeats of Election Day 2016, which many Democrats had believed would usher in a new Democratic president and a Democratic Senate.

“This is a miracle — to have a Democratic senator from Alabama!” Sen. Richard J. Durbin of Illinois, the No. 2 Democrat in the Senate, said after mingling at a reception for Jones.

The new senator told his supporters that his arrival in Washington was “the fulfillment of a dream for a long time.”

Rare are the moments of bipartisan comity in the Senate, but Wednesday’s ceremony offered one, however fleeting. It was the senators’ first day back at work after their holiday break — a time of “fresh starts and new mercies,” as the Senate chaplain, Barry C. Black, said in his opening prayer at noon.

But the swearing-in of Jones and Smith almost certainly brought a measure of relief to senators in both parties. For Republicans, Jones meant there would be no Sen. Roy Moore, who faced accusations of child molestation and whose election would have been hung around each of their necks.

For Democrats, Smith’s ascent ended a painful period when a popular colleague, Al Franken, was dogged by charges of sexual improprieties that blemished the Democrats’ efforts to capitalize on a tide of misconduct and harassment accusations.

Pence, in his role as president of the Senate, administered the oath of office.

But the real stars of the day were the two former vice presidents, both of whom also served as senators. As they milled about the Senate chamber after the brief swearing-in, the gregarious Biden greeted former colleagues with a hearty clap on the shoulder.

In a sense, the #MeToo movement played a hand in the arrival of both Jones and Smith. Jones, 63, comes to Washington after a raucous special election in which his Republican opponent, Moore, was accused of assault and molestation of girls as young as 14.

Smith, 59, the former lieutenant governor of Minnesota, was appointed by that state’s governor to fill the seat left vacant by the departure of Franken, who resigned amid allegations that he had forcibly kissed one woman and groped several others.

She becomes the 22nd woman in a chamber that remains heavily lopsided in favor of men. Nonetheless, there are more female senators now — 17 Democrats and five Republicans — than at any time in U.S. history. Smith has already said she will run in a special election in November to claim the seat in her own right.

Jones replaces Sen. Luther Strange, a Republican who was appointed to fill the seat vacated by Jeff Sessions when Sessions became Trump’s attorney general. His arrival in the Senate makes life more difficult for Sen. Mitch McConnell, the Republican leader, who must now manage his sometimes fractious conference with a narrow majority.

Jones made his name in Alabama as a lawyer who successfully prosecuted two members of the Ku Klux Klan involved in the bombing of the 16th Street Baptist Church in Birmingham, nearly 40 years after the crime. He is the first Democrat elected to the Senate from Alabama in 25 years.

This is not his first encounter with the chamber; after he graduated from law school, he spent a year working for Sen. Howell Heflin.

“It is still surreal,” Jones told supporters at his reception Wednesday. “It is incredible to be that young staffer coming back.”

Smith seemed similarly awed. She said Klobuchar had schooled her in the dress code of the Senate — women cannot have bare arms in the chamber — and she learned very quickly the lesson that all female senators learn: It is nearly impossible to spend a day walking the hard tile floors of the Capitol in high heels. “I think I’d like to sit down,” she confessed, sometime around 4 p.m.

Black voters turned out in droves to support Jones, and he vowed in return to hire a diverse staff. He has already started to make good on that promise; on Tuesday, he named as his chief of staff Dana Gresham, an African-American who previously served as an assistant secretary of transportation under President Barack Obama.

Gresham is the only black Democratic chief of staff in the Senate, according to the Joint Center for Political and Economic Studies, a research organization that tracks such appointments. Two Republican senators — Tim Scott of South Carolina and Jerry Moran of Kansas — have chiefs of staff who are black.

Among those attending the swearing-in was Eric H. Holder Jr., who served as attorney general under Obama; Holder and Jones worked together in the Justice Department in the 1990s. He said he expected his old friend to be a “principled moderate” and a “voice for justice and equality” on issues including criminal justice and voting rights. While Wednesday’s ceremony was a time to look forward, it was also a time to look back.

In the tradition of the Senate, where photographs are not allowed in the chamber, the swearing-in was followed by a re-enactment photo opportunity in the richly-decorated Old Senate Chamber, where lawmakers conducted their business from 1819 to 1859.

There, Mondale, 89, moving a tad slowly, chatted amiably with Pence, who extended an invitation to the entire Mondale family to visit the vice president’s residence on the grounds of the Naval Observatory here. The Mondales became its first occupants in 1977, when Mondale served under President Jimmy Carter.