Trump's Postmaster General wants to stay on the job, but his days in the Biden administration may be numbered 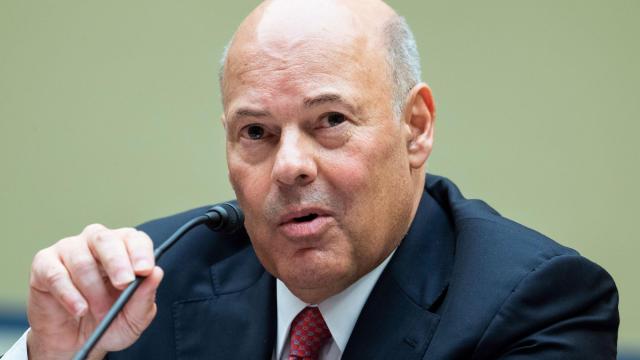 CNN — Embattled Postmaster General Louis DeJoy has told those close to him he wants to stay in his role under the new president, two sources tell CNN, despite his troubled tenure at the helm of the US Postal Service and his background as a supporter and donor to former President Donald Trump.

DeJoy is still actively pushing ahead, and even plans to release a new 10-year plan for the agency in the next few days, several sources familiar with his plans tell CNN, and will meet with the Postal Board of Governors on Tuesday, when it assembles publicly for the first time since Biden took office.

Getting rid of DeJoy is not a clean-cut process. The President does not have the power to remove the Postmaster General. Only the Postal Service Board of Governors -- which is comprised of members nominated by the President and confirmed in the Senate -- has the power to do so, and DeJoy continues to have the support of the Trump-appointed board.

But Biden has the power to nominate members of the board and to send them to the Senate -- now led by Democrats -- for confirmation. Some lawmakers want Biden to go beyond filling empty seats, and take drastic action by firing the entire board.

"(T)hrough the devastating arson of the Trump regime, the USPS Board of Governors sat silent," Rep. Bill Pascrell, a New Jersey Democrat, wrote in a letter to Biden in January. "Their dereliction cannot now be forgotten."

Complaints about the postal service began shortly after he was appointed by Trump with a mandate to cut costs and make things run more efficiently. The postal service drew attention to itself for all the wrong reasons in the months ahead of Election Day, in an election cycle with an unprecedented number of mail-in ballots.

Now, Americans are still complaining about woefully slow delivery. Lawmakers have urged the Postmaster General to address constituent claims of delays in mail-order medicine and credit card bills. And public outcry on social media over Christmas cards arriving months after the season, package notices warning of "unforeseen delays" and missing tracking numbers that offer no sense of a delivery date have continued to plague the USPS in recent months.

In his letter to Biden, Pascrell noted that the President has the power to fire board members "only for cause," though that is not clearly defined. So far, the new administration has not responded to Pascrell's letter.

With only six of nine seats filled, the current board of governors consists of two Democrats and four Republicans. Before leaving office in December, Trump attempted to solidify his control over the board by nominating a fifth Republican member, but the nomination did not go through the Senate before Biden took office.

Biden now has the power to stack the board with supporters of his agenda and vision for the giant agency. With three open seats and another two members over their term limit, Democrats are calling on Biden to do just that, and to nominate a new slate of board members who could eventually overthrow DeJoy.

David Partenheimer, a spokesperson for the Postal Service, didn't respond directly to CNN's request for comment on calls for DeJoy's ouster, saying instead that the postmaster general and others are working aggressively "to drive improvements across" the agency to "deliver better service to all Americans in every household."

The White House declined CNN's request for comment, but during Monday's White House press briefing, press secretary Jen Psaki dodged a question when asked whether Biden believes the postmaster general should keep his job and if the President would change the makeup of the governing board to facilitate his removal.

"Well, as I understand it, there are a number of openings right now on the governing board of the post office, or vacancies...that would, of course, work their way through a personnel process. I don't think I have anything more for it, on this for you," Psaki told reporters during the White House press briefing.

One source close to the Biden transition team told CNN that the administration was receptive to suggestions for board members, but any sort of movement on nominations did not seem imminent. Five days after taking office, Biden designated a Democrat as the new Chairman of the Postal Regulatory Commission -- a role that requires no congressional oversight.

DeJoy emerged from obscurity last summer, raising alarms with aggressive new strategies that upended the USPS months before the country was set to vote by mail in unprecedented numbers. Federal judges across the country issued unprecedented decisions to temporarily block DeJoy's changes from being implemented ahead of the election.

In one such ruling in September, a federal judge in New York ruled that the agency must prioritize election mail and reverse some key policy changes imposed by DeJoy. The judge also called out "managerial failures" at the agency that he said undermined the public's faith in mail-in voting.

Critics linked DeJoy, a Republican megadonor, to Trump and his repeated rhetoric undermining mail-in voting. Eventually, an embattled DeJoy suspended some of the changes until after the election.

Biden, meanwhile, campaigned on saving the Postal Service, and days after taking office, he signed an executive order directing federal officials to come up with a plan to convert all 225,000 Postal Service vehicles to electric "zero-emission vehicles." One USPS source told CNN that this move would save USPS millions of dollars in maintenance fees, but there was still no clear indication of where the money would come from to actually implement the change.

Some people close to the Postal Service also worry that additional moves to help the agency can't happen quickly enough because the administration has so much it has promised to tackle across the government. But time is ticking -- a dire financial report conducted by USPS estimated a net loss of $9.7 billion in 2021, another huge hit for an already crippled agency.