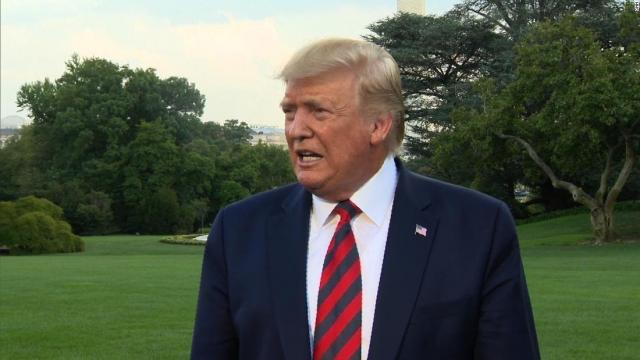 CNN — He angrily hung up on the Australian Prime Minister. He dialed Mexico's President as a room full of reporters watched. And he's distributed his personal cell-phone number to at least two world leaders, urging them to call directly.

Since taking office, President Donald Trump's phone calls with his foreign counterparts have become an extension of a freewheeling presidency that adheres to few rules. Now, those calls are coming under new scrutiny after an intelligence whistleblower reportedly raised concern about what Trump said in his communications with a foreign official.

All details of the complaint are being withheld from Congress, and it's not clear whether the communication was by phone or through another type of communication. Trump has denied any wrongdoing, and tweeted Thursday he was fully aware his calls were being monitored by various governments: "Is anybody dumb enough to believe that I would say something inappropriate with a foreign leader while on such a potentially 'heavily populated' call," he wrote.

But current and former administration officials say Trump has approached his foreign leader calls with a spontaneity and informality his predecessors largely tried to avoid, leaving officials at times surprised and puzzled by the conversations.

Trump's team typically prepares a half-page of talking points and toplines ahead of each officially schedule call, cognizant that anything longer will lose the President's attention. In some instances, officials will brief the President in person before he is connected to another leader.

Trump's preference is often to conduct calls by himself from the Executive Residence, a desire that has at times forced key national security aides to monitor the conversations from other parts of the White House complex, including the Situation Room, far away from the President himself.

That posed a problem, the official said, as aides often want to be in the room to guide the President through complicated issues while the call is ongoing. But as leaks from the calls over the course of the administration angered Trump, top officials in the West Wing began to limit who could listen in on the conversations, hoping to tighten the circle of people aware of what the President was discussing with foreign leaders.

World leaders frequently approach Trump with impossible or obscure requests, be it asking for support for a certain policy or appealing for the United States' help on certain matters, according to an administration official.

Often, Trump will respond by telling his counterpart he'll have "his people look into it" -- a brush-off the administration official said was the President's way of casting aside unfeasible requests.

In one such instance, a foreign leader asked the President to intervene when a state-owned entity came under Justice Department indictment. The President said it would be looked into, though nothing ultimately was done.

Two officials said Trump is more cautious in his phone conversations with Russian President Vladimir Putin, careful not to make requests or commitments that could later be used against him. Trump's relationship with Putin has been highly scrutinized after US intelligence agencies blamed Putin for ordering an election interference campaign in 2016 to benefit Trump.

Trump has questioned that intelligence, and broke with his aides advice in 2018 to congratulate Putin in a phone call after an election win widely seen as illegitimate.

The two men's interactions have at times alarmed national security officials, including when they met privately without aides or note-takers. Trump also alarmed US intelligence officials when he discussed classified information with Russian officials in the Oval Office.

But aides said Trump has been careful in other phone calls with Putin to avoid being pinned down, though did offer US assistance at the end of July for wildfires in Siberia.

That phone call, along with a half-dozen other conversations, have now come under scrutiny amid the controversy surrounding the intelligence whistleblower. Little is known about the conversation in question, but in the weeks leading up to the August 12 complaint, Trump spoke by phone with Israeli Prime Minister Benjamin Netanyahu, French President Emmanuel Macron, Ukrainian President Volodymyr Zelensky and British Prime Minister Boris Johnson, in addition to Putin.

During a call between the President and a foreign leader, only around four officials are typically listening, including the national security adviser, the National Security Council director and deputy director for that region.

The calls occur on a recorded secure line and are listened to in the Situation Room, people familiar with the process said. A transcript of the call is then filed away and very few people in the White House or wider administration have access to it.

Last April, CNN was first to report that the White House had suspended the practice of publishing public summaries of Trump's phone calls with foreign leaders, though sources said "readouts" continued to be released internally.

While the White House did not release public descriptions of the phone calls, press aides would confirm that the calls took place only after they were reported by foreign governments, though rarely elaborated on what was said.

But that suspension has shifted in recent months. The White House has started releasing public readouts of the President's formal calls with leaders once again, including several of those now under scrutiny. The readouts are handled at the National Security Council, but approved by the West Wing press office before being released. They are often brief, with few details.

A National Security Council spokesman declined to immediately elaborate on why the policy changed. It has been in effect for at least the last full month.

Still, two people familiar with the matter cautioned that there are not readouts for every call the President makes -- there are only official readouts for the official calls.

Trump, who has multiple iPhones that aides once joked were "Trump 1" and "Trump 2," has developed a habit in office of calling foreign leaders that he's developed a personal relationship with, often after hours when most of his staff is not in the office.

He's also distributed his cell phone numbers to at least two foreign leaders, telling them to call him personally. It's not clear how often, if at all, those leaders used Trump's personal line.