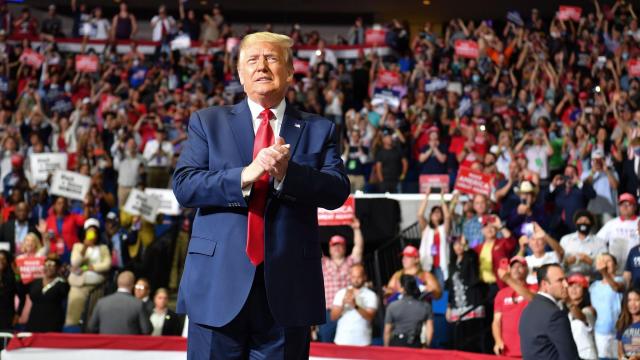 McEnany told reporters aboard Air Force One that the rally would be postponed a week or two due to the impending storms in the area. The rally was slated to be held outside at an airplane hangar amid the coronavirus pandemic.

Trump commented on Tropical Storm Fay ahead of his departure for Florida earlier Friday, saying he was monitoring the storm, which is expected to hit the East Coast.

"The rally scheduled for Saturday in Portsmouth, New Hampshire has been postponed for safety reasons because of Tropical Storm Fay. It will be rescheduled and a new date will be announced soon," campaign communications director Tim Murtaugh said in a statement.

Ahead of the now-postponed Saturday rally, White House counselor Kellyanne Conway appeared to downplay crowd expectations, claiming that "millions" of supporters are staying home because they already support Trump and don't need to see him in person amid a pandemic.

"People will decide whether they want to go. I think there are so many millions, literally, of Trump-Pence voters who don't want to go to rallies because they are already supporting the President and they're going to do what they can to get other people to support the President, but they don't want to go to rallies because maybe they're older or they have some of the underlying co-morbidities," she said during a Friday appearance on Fox News.

The Portsmouth event was set to be the first campaign rally since Trump supporters gathered in Tulsa, Oklahoma, last month. That event fell short of attendance expectations, but Tulsa health officials said it -- as well as protest events around the rally - likely led to a significant rise cases in the area.

Unlike Tulsa, Portsmouth's rally was planned to be largely outdoors, and rallygoers were "strongly encouraged" to wear a face covering.

Plans for an Alabama rally, which had been tentatively scheduled for July 11 before the New Hampshire rally was announced, were scrapped after local officials voiced opposition to holding a large gathering as cases rise in the state.

This story has been updated with a statement from the Trump campaign and more details about the rally.