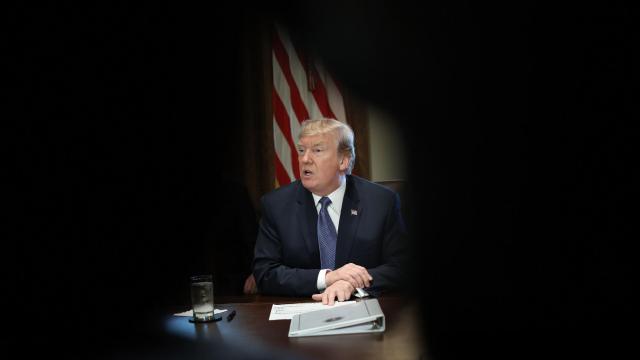 CNN — President Donald Trump's personal lawyers told the Supreme Court Monday that the House of Representatives and a Manhattan prosecutor should not be able to subpoena the President's long-time accounting firm and banks for his financial records, in a monumental dispute concerning separation of powers and claims of absolute immunity that will be heard by the justices later this term.

For years, the President has been battling a broad range of legal challenges attempting to force the release of his tax returns and other financial documents, and now the Supreme Court will hear arguments on the dispute sometime this spring and render an opinion by July -- just as the presidential election is gearing up.

"To call these subpoenas unprecedented would be an understatement," argued Jay Sekulow, one of the President's personal lawyers, in the opening briefs.

The filings came as Chief Justice John Roberts is presiding over the Senate impeachment trial and Trump's legal team has spent hours on the Senate floor presenting the President's defense in the proceeding.

In the cases regarding Trump's financial documents, lower courts have allowed the subpoenas to go forward but those decisions have been put on hold while the Supreme Court considers the issue.

The justices will review two cases.

In one, lawyers for the House or Representatives seek to subpoena Mazars, USA, Trump's long time accounting firm and two of his banks, Deutsche Bank and Capitol One, for a variety of his financial records. The House says it has a valid purpose to ask for the documents because Congress could use the information to change or amend its financial disclosure laws.

"The election of a President who has decided to maintain his ties to a broad array of business ventures raises questions about the adequacy of existing legislation concerning financial disclosures, government contracts with federal officeholders, and government ethics, more generally," House General Counsel Douglas Letter told the Court in briefs filed during an earlier phase of the appeal.

Among the issues the House is investigating are payments that Michael Cohen, the President's former personal lawyer, made to a third party. Trump eventually disclosed the Cohen payments in May 2018 as a liability of less than $250,000.

Another House committee is also investigating whether banks are complying with anti-money laundering and due diligence compliance programs. House lawyers point to reports revealing that "several Trump properties were purchased using anonymous shell companies funded by Russian oligarchs alleged to have previously engaged in money laundering."

A separate case arises out of a state criminal investigation led by Manhattan District Attorney Cyrus C. Vance, who served a subpoena on Mazars, USA as part of an investigation into hush money payment to two women with whom the President allegedly had extra-marital affairs pursuant to testimony of Cohen. The subpoenas seek records dating from 2011 to the present day concerning transactions unrelated to any unofficial acts of the President.

Trump's lawyers argue he is immune from such requests made while he is President.

Lawyers for the House and Vance will respond to the briefs in the coming weeks. The court has yet to reveal the exact date of oral arguments, but they are expected sometime in March.