Trump meets with Venezuelan opposition leader at the White House 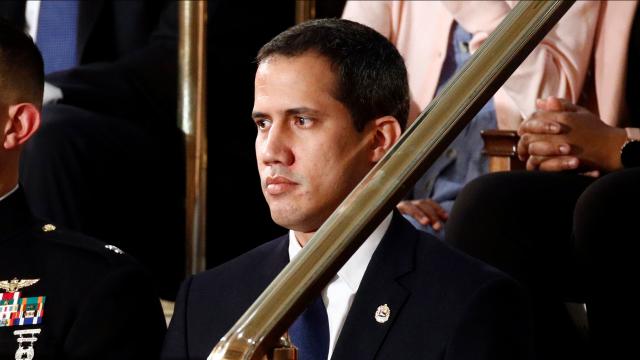 The abruptly announced Oval Office meeting came a day after Guaidó was a surprise guest of Trump's at the State of the Union address Tuesday evening.

"Today, President Donald J. Trump will welcome Interim President Juan Guaidó of the Bolivarian Republic of Venezuela to the White House," a White House press statement said just hours before the planned meeting. "The visit is an opportunity to reaffirm the commitment of the United States to the people of Venezuela and to discuss how we can work with President Guaidó to expedite a democratic transition in Venezuela that will end the ongoing crisis."

Last year, the Trump administration recognized Guaidó as the legitimate president of Venezuela.

During Tuesday's State of the Union address, Trump reiterated that his administration views Nicolás Maduro as a "socialist dictator," "an illegitimate ruler" and "a tyrant who brutalizes his people."

"But Maduro's grip of tyranny will be smashed and broken," the President added.

Trump also called on Guaidó to tell Venezuelans: "All Americans are united with the Venezuelan people in their righteous struggle for freedom! Socialism destroys nations. But always remember, freedom unifies the soul."

Following the recognition at the State of the Union, Guaidó shared his thanks on Twitter "on behalf of millions of Venezuelans who continue to stand and fight."

Although Guaidó has the support of the United States and dozens of other countries, he has failed to gain full control of the levers of power in Venezuela.

Embattled President Nicolás Maduro has refused to leave office, despite calls for his capitulation. The US has aimed to pressure Maduro to leave power, primarily through a campaign of targeted sanctions, for more than a year to no avail. Both Guaidó and US Secretary of State Mike Pompeo have suggested they do not plan to negotiate with Maduro.

"The dictatorship killed that opportunity," Guaido told CNN in mid-January.

Trump has directed US officials to "use all of the tools at our disposal" to end Maduro's dictatorship, a senior administration official told reporters prior to Guaido's White House meeting.

The official also said additional actions to target the Maduro regime are slated to take place over the next 30 days.

Starting in January 2019, the official said the administration adopted a "maximum pressure policy," adding that they feel they are currently "about halfway to what maximum pressure could look like."

"Any harm that may be cause on Juan Guaidó upon his return to Venezuela will have very significant consequences. Therefore they should tread very carefully in that regard," the official warned.

Wednesday's meeting is a high-profile vote of confidence for Guaidó, who leads Venezuela's National Assembly. It comes as he wraps up weeks of international travel which included stops in Europe, South America and North America. While in Colombia, he met with Pompeo.

During that meeting in Bogotá, Pompeo voiced the administration's solidarity with Guaidó.

"For the Venezuelan people, I want you to know that your President is a great leader who wants to take your country in the right direction -- the direction of freedom, democracy, to restore economic prosperity," Pompeo said in briefing remarks during their meeting in mid-January. "You should know that countries across the world -- in Latin America where we are today, in Colombia, in Europe, the United States, all across North America -- the people, the democratic people of those countries are with you."

"Trump offends and disrespects the Venezuelan people as he pushes violent threats against ... the constitutional, legitimate and democratic government of Nicolás Maduro," Arreaza said Wednesday in Caracas.