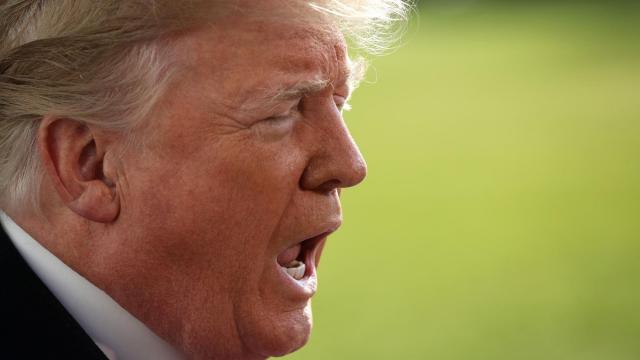 (CNN) — President Donald Trump has been talking a lot about the death penalty recently.

On Friday, he pushed for capital punishment for people who kill police officers.

"We will protect those who protect us," he said during a speech to law enforcement officers in Kansas City. "And we will believe the right punishment, and we all do, for cop-killers, is called the death penalty. And you know in some circles, that's very controversial to say that? You have all the television cameras rolling back there, for me it's not even a little controversial. You kill a cop, and it's called the death penalty."

The US federal government has not executed a prisoner since 2003 and most prosecutions and convictions for murder occur in state courts. There are currently 62 prisoners on federal death row compared to more than 2,500 on death row in states, according to the Death Penalty Information Center.

On Wednesday, Trump tweeted in support of using the death penalty for drug dealers in China, weighing in on the domestic affairs of another nation and contradicting bipartisan criminal justice reform efforts, which Trump has endorsed.

Trump was praising the Chinese government and President Xi Jinping for criminalizing fentanyl, but he also took the step of making clear he has no problem with China's government killing "pushers" of the drug, which has also helped fueled the opioid crisis in the US.

It's not the first time Trump has spoken admiringly of other countries' use of the death penalty for drug dealers. He's mooned after the Philippines leader Rodrigo Duterte's liberal use of execution for drug dealers, meted out by mobs, even though it's drawn international concern about the rule of law.

In March he suggested during a White House summit on the opioid epidemic that the death penalty for drug dealers be imported to the US.

"Some countries have a very tough penalty, the ultimate penalty, and they have much less of a drug problem than we do," Trump said.

He repeated the sentiment a few weeks later during a speech in New Hampshire, which has been hard hit by the opioid crisis.

"If we don't get tough on the drug dealers, we are wasting our time," Trump told the audience in Manchester, New Hampshire. "And that toughness includes the death penalty."

It is hard or impossible to square Trump's clear interest in the death penalty for drug pushing with the separate bipartisan efforts undertaken by members of his administration, notably Jared Kushner, to institute criminal justice reform, which could include sentencing reform. It's one of the few truly bipartisan efforts on display in Washington at the moment.

Add to that Trump's stated interest in delivering pardons and commutations to drug dealers.

That's what he did to Alice Johnson after public lobbying by Kim Kardashian, granting Johnson clemency in June.

"While this administration will always be very tough on crime, it believes that those who have paid their debt to society and worked hard to better themselves while in prison deserve a second chance," the White House statement at the time said.

Johnson's crime, by the way, was drug trafficking. She was the linchpin of a massive drug ring that "dealt in tons of cocaine," according to news reports about her conviction.

She turned into a model prisoner and mentor, and that's why she ultimately got Trump's clemency.

The bipartisan effort to overhaul the criminal justice system would seek to change some mandatory minimum guidelines, and there is some bipartisan support for changing sentencing guidelines specifically to give nonviolent drug offenders second chances.

While Trump did endorse those efforts, he pays much more lip service to toughness -- in endorsing fellow Republicans, he routinely promises they'll be "tough on crime." That's a phrase that brings to mind the 1990s era, which saw a race to make criminal penalties increasingly strict and which the criminal justice reform effort, to some extent, is seeking to unwind.

A majority of Americans think capital punishment is morally acceptable for murderers, but the numbers flip when they are asked if it should be applied to drug dealers.

After Trump's comments in March, Quinnipiac asked about the death penalty in a poll and found 58% of Americans support the death penalty for people convicted of murder, but another majority, 51% , said they would prefer a sentence of life without parole.

In that same poll just 21% said they supported the death penalty for people who sold drugs that contributed to a fatal overdose. A similar 20% said they thought capital punishment for such people would help stop the opioid crisis.

The Supreme Court has held that the death penalty should not be instituted for any offense that does not result in the death of a victim, and has said it is not appropriate for rape.

Large-scale drug trafficking is a capital crime under US law, but the death penalty has not been instituted for that purpose, and would certainly raise a court battle.

The use of the death penalty has been on the decline in the US in recent years, according to a trove of data maintained by the Death Penalty Information Center.

Thirty states and the US government have the death penalty, although three of those -- Colorado, Pennsylvania and Oregon -- have placed a moratorium on its use in recent years, according to the center. Seven of the 20 states that have abolished the death penalty have done so since 2007, either by court decision, legislative action or, in the case of New Mexico, by vote.

The rate of executions has fallen markedly, from more than 60 each year nationwide in the late 1990s to fewer than 30 each year since 2015, and the drop in death sentences has been even steeper.

Executions today are clustered in a few states. There have been 65 people put to death in the US in the past three years, according to the Death Penalty Information Center, and 40% of those were in Texas alone.

Oklahoma has not had an execution for years, in part because it cannot get the drugs needed to carry them out.

Nebraska set a new precedent in August, when it conducted its first execution in 21 years and put Carey Moore to death for the double murder in 1979 of Omaha taxi drivers Maynard Helgeland and Reuel Van Ness Jr. The four-drug cocktail used to execute Moore included fentanyl, the drug Trump suggested seeking the death penalty for illegally pushing, as a painkiller.