Trump wants the TikTok deal to pour $5 billion into 'real history' education. It's not that simple 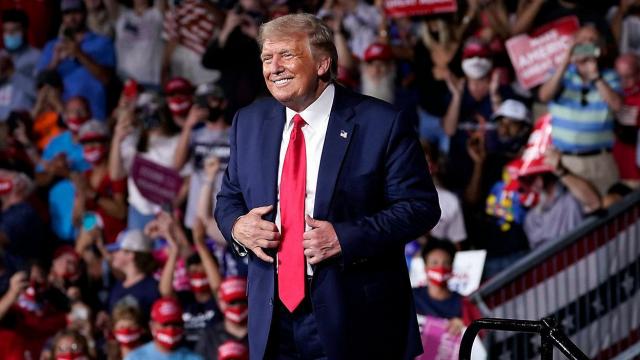 CNN — President Donald Trump is adamant that a tentative deal involving short-form video app TikTok will include a $5 billion fund to "educate people" about the "real history of our country."

That appears to have taken TikTok's Chinese parent company ByteDance by surprise, and created even more confusion about how the finer points of an already complicated deal will work in practice.

Trump mentioned the fund at a rally in North Carolina on Saturday, as he signaled his approval of a deal between ByteDance, Oracle and Walmart.

The deal — which would temporarily avert a ban on TikTok in US app stores — would see Walmart and Oracle take a stake of up to 20% in a newly created US-based entity, TikTok Global. Beijing-based ByteDance says it will retain 80%.

As part of the deal, Trump said he asked the companies to "do me a favor" by putting "$5 billion into a fund for education, so we can educate people as to [the] real history of our country — the real history, not the fake history."

This isn't the first time Trump has floated the idea that a TikTok deal should include some kind of monetary reward for the US government. He previously expressed a desire for the companies involved with the deal to give money to the US Treasury, but last week said he was surprised when he was told such an arrangement would be illegal.

Trump's latest remarks have done little to clarify how an education fund would work, creating even more confusion.

It's not just observers who are scratching their heads. ByteDance said Sunday that it was unaware that a multibillion dollar education fund would be tied to the TikTok deal.

"Some news media reported that TikTok will set up a $5 billion education fund in the United States," ByteDance said in a statement posted Sunday on Chinese social media. "We would like to clarify that it was also our first time hearing about the news."

The company added that it "has been committed to investing in the education field, and plans to work with partners and global shareholders to launch online classroom projects based on AI [artificial intelligence] and video technology for students around the world."

A slew of other statements released by ByteDance, Oracle and Walmart over the past couple of days could shed some light on what Trump might have in mind.

While Walmart and Oracle did not mention anything about an education fund in a statement released over the weekend, they did say that the new TikTok Global entity "will pay more than 5 billion in new tax dollars to the US Treasury."

In a statement Monday, ByteDance described the "so-called tax payment" as "an estimation of the corporate income tax and other operating taxes that TikTok will need to pay for its business development in the next few years."

There is another possible explanation for Trump's remarks: The president appears to be trying to get some extra mileage out of the proposed TikTok deal by tying it together with his attacks on what he has called "the liberal indoctrination of America's youth." For weeks, he has been waging battles on interpretations of history that he claims are un-American, including The New York Times' 1619 Project.

In a Constitution Day speech last week, Trump called the Pulitzer Prize-winning 1619 Project "toxic propaganda." The project reframes American history around the year when the first slave ship arrived on the country's shores.

Trump also tweeted earlier this month that the Department of Education was looking into reports that California schools would teach the project in schools, adding that "If so, they will not be funded!" (It's not really clear how widespread this phenomenon is. Some schools have said they will adopt the 1619 Project into their lessons, but how many isn't known.)

— Brian Fung and Sherisse Pham contributed to this report.