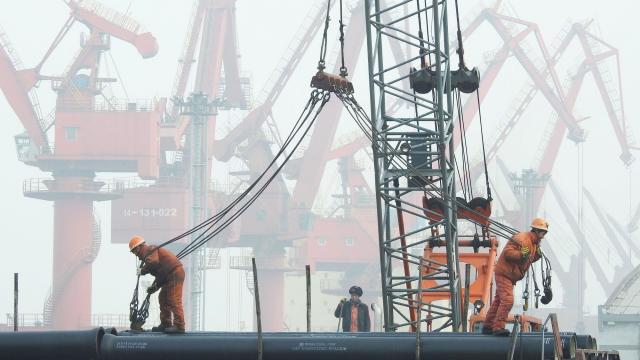 EDITOR'S NOTE: Binyamin Appelbaum is the lead writer on economics and business for The New York Times editorial board. He was a reporter for The Charlotte Observer.

Tariffs on imports from China have refilled the employee parking lot at Stoughton Trailers in Evansville, Wisconsin. The company makes chassis, the wheeled steel frames that carry cargo containers around the country. Chassis from China are now prohibitively expensive, Stoughton is hiring hundreds of workers — and the rest of us are paying for those jobs.

The tariffs have contributed to a shortage of chassis in the middle of an import boom, one reason that American ports are gridlocked. Tariffs also drive up prices. American chassis are beginning to roll off production lines, but they cost more than pre-tariff Chinese chassis, which raises the price of everything that travels by chassis.

In slapping tariffs on chassis and a wide range of other goods in 2018, President Donald Trump loudly insisted China was cheating by subsidizing its export industries. Tariffs, he promised, would shelter American manufacturers from unfair competition. President Joe Biden has maintained the tariffs. The federal government is on pace to collect more money in tariffs this year than in any previous year.

Supporting manufacturing is a worthy goal. Chassis makers have requested a variety of federal actions, including immigration reform to expand the workforce, technical training for workers, and tax incentives to invest in automation.

Instead of making long-term investments to help companies to compete, however, the government has decided to limit competition, a lazy approach that is both expensive and counterproductive. Taxing imports from China gives the appearance of punishing China, but the cost of the tariffs is paid by Americans.

Proponents, including American chassis manufacturers, argue that a small increase in prices is worthwhile to preserve jobs. Indeed, they argue that consumers will barely notice. It’s too early to run the numbers on chassis, but past examples of similar policies show what’s wrong with that logic. In 2009, for example, the Obama administration slapped tariffs on Chinese tires to protect domestic manufacturers. One analysis found the tariffs preserved up to 1,200 tire-making jobs at a cost of about $25 per tire.

If that seems like a reasonable deal, consider that the total cost added up to more than $1 billion in one year out of the pockets of American consumers — or almost $1 million per job to save jobs that paid about $40,000 on average. It would have been far, far more economical for the government to pay the workers to not make tires.

The Trump administration’s 2018 tariff on foreign washing machines similarly created 1,800 jobs at a cost to consumers of about $817,000 per job, according to a study by economists at the University of Chicago and the Federal Reserve.

Moreover, while some jobs are gained, others are lost. A Fed analysis found that the Trump tariffs didn’t even increase employment in the manufacturing sectors that they were intended to bolster because the benefits of reducing competition were outweighed by the higher cost of some components — and retaliatory tariffs.

Stoughton opened its Evansville plant in 1993 to build the intermodal containers and chassis that are the basic infrastructure of global trade. It prospered until the early 2000s, when China International Marine Containers started offering chassis in the United States at a price lower than what Stoughton paid for raw materials. The Wisconsin company largely suspended chassis production in 2006. In recent years, the Chinese company made more than 80% of the new chassis sold in the United States.

When Trump decided to impose 25% tariffs on a wide range of Chinese goods in 2018, chassis did not appear on the list. It was added after Cheetah Chassis, a Pennsylvania manufacturer that had survived by focusing on niche markets, mounted a lobbying campaign portraying Chinese chassis as a classic example of the unfair trade practices Trump was seeking to punish.

Cheetah’s chairman, Frank Katz, dismissed the complaints of trucking companies that tariffs would result in higher prices. “What they really mean is that they want to continue to buy chassis at unfairly low prices,” he said. Cheetah also rang the national security bell, hiring a lobbying firm to argue to trade officials that “the very free flow of commerce within the United States is at risk.” Of course, that’s true of many other goods, too, and a country that tries to make everything by itself will not in the end be more secure. It will be poorer, weaker and isolated.

Unsatisfied with the 25% tariff, domestic chassis makers sought a ruling that China was unfairly subsidizing CIMC, which would trigger even larger tariffs. They argued that CIMC should face additional penalties because it rushed extra chassis to the United States in 2018 before the Trump tariffs had taken effect. Bob Wahlin, Stoughton’s chief executive, had failed in 2015 in a bid to persuade regulators to impose tariffs on cargo containers from China.

This time was different. This past May, the government enacted additional tariffs on chassis, raising the total import tax to an astonishing 246%. A CIMC chassis that sold for $10,000 a few years ago would now cost almost $35,000. One predictable effect is that chassis imports from Mexico have more than tripled since 2017. Another is that ports and trucking companies can’t find enough chassis. American businesses expect to produce about 15,000 chassis this year, enough to meet less than half of the annual demand. The South Carolina Ports Authority, which announced plans to buy 13,000 chassis earlier this year, now says it doesn’t expect to take delivery until 2023.

But Cheetah and Stoughton got what they wanted. Wahlin said that his company expected to be making 200 chassis a week by January, and that it planned to open a new factory in the southern United States to help increase production to 500 chassis a week. He hopes to add a total of about 500 workers at wages starting at $18 an hour.

The victory, however, is fragile. The punitive tariffs on Chinese chassis will last five years, which is intended to let American companies find their footing in the market. That may make sense in emerging sectors, like solar power. But if companies in mature industries can’t compete today, how will they be able to compete tomorrow?

Some domestic industries, like steelmaking, have received multiple rounds of unsuccessful government protection. Others, like pickup truck makers and sugar growers, have been in the federal industrial protection program for decades. If there are examples of temporary tariff protections sparking a rebound, I haven’t been able to find them.

Biden should make a clean break with Trump’s destructive tariffs. The right recipe is simple, though not easy: Support innovation, maintain an environment in which companies can flourish, ensure workers reap the benefits — and stop worrying so much about China. This article originally appeared in The New York Times.