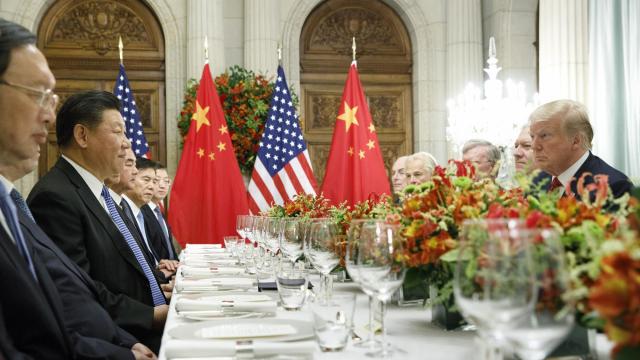 WASHINGTON — President Donald Trump tried to calm global markets and ease concerns on Wednesday that his trade truce with China was floundering, declaring in a series of Twitter posts that the Chinese government was sending “very strong signals” about a weekend agreement he reached with President Xi Jinping and suggesting that U.S. exports to China are about to surge.

Trump and his advisers have been touting the trade truce reached in Buenos Aires, Argentina, as a victory, saying that China had agreed to buy $1.2 trillion worth of U.S. products and address its long-standing practice of requiring companies doing business there to hand over technology and trade secrets. Trump has said repeatedly that China will “immediately” begin buying more U.S. agricultural products and that it is prepared to drop its 40 percent tariffs on U.S. cars.

But global markets were rattled Tuesday by relative silence from the Chinese about the agreement as well as by Trump’s declaration that he was a “Tariff Man” and was prepared to impose higher levies if Xi did not live up the agreement forged on the sidelines of the Group of 20 summit meeting in Argentina.

Markets in the United States were closed Wednesday to honor former President George H.W. Bush, who died Friday night, and Trump used the opportunity to put a more positive spin on his negotiations with the Chinese.

“Not to sound naive or anything, but I believe President Xi meant every word of what he said at our long and hopefully historic meeting,” Trump tweeted.

In a separate tweet, Trump pointed to a Bloomberg News report that said Chinese officials were preparing to restart imports of U.S. soybeans and liquefied natural gas. That report could not be immediately confirmed by The New York Times, and analysts have been left wondering about the scope of China’s spending spree.

But trade experts and industry insiders remain perplexed, anxiously awaiting information about the timing and composition of the $1.2 trillion, a number that dwarfs the $130 billion in goods that the United States exported to China last year. A Treasury spokesman said that the $1.2 trillion in purchases, which would be on top of what China is already projected to buy, would take place over several years and that it would include both goods and services.

It would take a drastic shift in trade patterns or U.S. production levels — or both — for China to be able to purchase $1.2 trillion of exported U.S. goods over the next year.

The United States is on pace to export about $1.7 trillion in goods to the entire world this year, according to Census Bureau data. Only about $126 billion of that will go to China. That means, in order to hit the target Treasury Secretary Steven Mnuchin has discussed, the Chinese would need to buy almost 10 times as many goods from the United States next year — and 70 percent of the goods the United States exports, at current levels.

In other words, if China doubled the amount of goods it bought from the United States starting next year, it would take nearly a decade to reach the $1.2 trillion goal.

Scott Kennedy, a China expert at the Center for Strategic and International Studies, said that purchases of that magnitude would take years to accomplish and that it is difficult for two countries to commit to such a long-term agreement given constantly changing market dynamics and technology.

“It sounds nice because there’s a ‘T’ in it,” Kennedy said, referring to the word “trillion.”

Even if China agreed to double its goods purchases, the question remains: What could it buy?

Trump suggested two commodities on Wednesday that could fit the bill: liquefied natural gas and soybeans. In both cases, China has effectively halted what had been large purchases of U.S. exports, in the midst of the trade war.

The United States exported 1.7 million metric tons of soybeans to China over the course of a single week in November last year, data from the Agriculture Department shows. This year, the number of exports during that same week fell to zero.

Simply returning to previous levels would be a significant win for U.S. farmers — but it would not come close to $1.2 trillion. In the 2017 fiscal year, before trade tensions flared, the United States exported about $22 billion in agricultural products to China. For the 2018 fiscal year, that fell to about $16 billion. For the 2019 fiscal year, it is projected to fall further, to $9 billion. That is a $13 billion gap from the pre-trade war levels, which, if filled with Chinese purchases, would take 92 years to add up to $1.2 trillion.

Likewise, China stopped importing any U.S. liquefied natural gas in September, after buying 10 million cubic feet of the gas in September 2017. At this year’s prices, that was a loss of about $47 million — though overall liquefied natural gas exports continue to trend up for the United States, as countries outside of China increase their demand. One theory is that China could ramp up its imports of U.S. services. China’s Ministry of Commerce said this year that it expects cumulative, global services imports to exceed $2.5 trillion in the next five years.

When it comes to soybeans, the timing of China’s new purchases could matter more than the amount. The United States typically enjoys strong export sales in the fall for soybeans, before South American competitors harvest their crops.

“This is, generally speaking, the peak export time of the year for the U.S. to send soybeans to China,” said Matt Witte, a former commodities trader who is now a solutions manager at Descartes Labs, which is tracking shipping data to show how tariffs are diverting U.S. soybean shipments from China to countries like Argentina.

American farmers, Witte noted, have stockpiled an abnormally large amount of soybeans as Chinese demand has fallen off. If the Chinese moved now to re-enter the market, he said, “They could buy millions upon millions of metric tons of soybeans, and the U.S. system would probably take that fairly easily.”

“As far as we know, there are no soybeans being exported to China yet,” said John Heisdorffer, president of the American Soybean Association. “Nothing happening yet.” While China expressed confidence in the trade talks Wednesday, its government has yet to provide any specific details about what was agreed to during the meeting or to confirm the items that Trump has cited as areas of agreement. In a brief statement on its website, the Chinese Commerce Ministry said both sides would continue to put their trade commitments into effect.

Trump has vacillated between trying to portray the deal as a trade win and continuing to threaten China with additional tariffs if they do not accede to his demands. On Tuesday, as concerns began mounting that the president may have agreed to a hollow deal, Trump issued a series of tweets saying he was prepared to move forward with additional tariffs on China if it did not make good on its commitments. The tweets helped drive the stock market lower, with companies like Boeing and Caterpillar — which are heavily exposed to China — falling.

“Both the sentiment of the tweets — the president called himself ‘Tariff Man’ — and the profound lack of understanding of economics they demonstrated were deeply alarming,” Ian Shepherdson, the chief economist at Pantheon Macroeconomics, wrote in a note to clients.