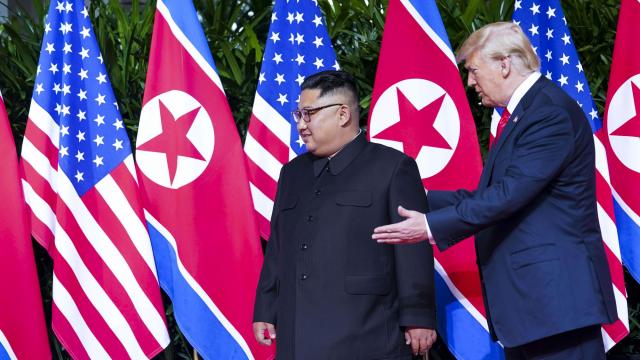 WASHINGTON — President Donald Trump plans to hold a second meeting early next year with Kim Jong Un, even though North Korea has failed to follow through with promises to start dismantling its nuclear weapons program, John Bolton, the national security adviser, said Tuesday.

“They have not lived up to the commitments so far,” Bolton said. “That’s why I think the president thinks another summit is likely to be productive.”

Bolton was referring to a pledge that the North Korean leader made in June at his first face-to-face meeting with Trump in Singapore. At the time, Kim said North Korea would work toward “complete denuclearization of the Korean Peninsula.”

Senior U.S. officials interpret that as North Korea taking measurable steps to freeze and dismantle its nuclear program, most notably turning over a complete list of its assets to the United States and other governments. North Korean officials have not made any such moves, and they have insisted that the United States should first sign onto a formal declaration to end the Korean War as well as ease up on harsh economic sanctions.

The historic Singapore meeting with Trump was a propaganda boon for Kim, who has long wanted direct dialogue with the United States. A second summit would again appease Kim while sacrificing an important point of leverage that the United States has with North Korea, according to some analysts.

He said that “meeting Kim again only validates Kim’s strategy of using Trump to play for time and sanctions relief, and keep North Korea on the pathway to becoming a de facto nuclear weapon state.”

Until this year, the United States had sought to isolate North Korea diplomatically and economically; now it is relying solely on economic isolation through sanctions.

Bolton said the second meeting between the two leaders would probably take place in January or February.

He made his remarks in an onstage interview session at a conference of business executives in Washington organized by The Wall Street Journal. The interviewer, Gerard Baker, an editor at large at the Journal, pressed Bolton on the logic of holding another meeting when North Korea was not making any efforts to denuclearize.

“They’re going to discuss this and look at the commitments that were made in Singapore and have a discussion about how they’re going to accomplish those commitments,” Bolton said, “and until that happens there’s not going to be any release of the economic sanctions.”

Jean H. Lee, a Korea analyst at the Wilson Center, said the United States would need to prepare carefully before the meeting to have a chance at making progress on those commitments.

“The Trump administration must be just as savvy and just as smart as the North Koreans are in the weeks leading up to the next summit if the goal is to come out of that meeting with concrete progress on denuclearization — and not just a propaganda win for Kim,” she said. “North Korea will be holding out for a leader-to-leader process, but it would be prudent for officials from North Korea and the U.S. to prepare for any promises that the two leaders might make with a step-by-step timeline so there aren’t any surprises at the next summit.”

Bolton has consistently been more critical of North Korea than Trump or Mike Pompeo, the secretary of state, who has been trying to restart stalled diplomatic efforts.

In August, Bolton said, “North Korea has not taken the steps we feel are necessary to denuclearize.” That was around the time North Korean officials began stressing the need for an end-of-war declaration; the Korean War halted in 1953 with an armistice, and there has been no peace treaty.

President Moon Jae-in of South Korea has agreed with Kim that such a declaration would be an important step, and South Korean officials have urged their U.S. counterparts to support the move. Moon has met with Kim three times this year, in a surprising flurry of diplomacy, and still hopes to host the North Korean leader in Seoul before the end of this year in what would be a historic visit.

Last month, a top North Korean official, Kim Yong Chol, canceled a trip to New York to meet with Pompeo. Days earlier, the North Korean Foreign Ministry had said Pyongyang would revive a policy aimed at bolstering its nuclear program if the United States did not lift economic sanctions. The statement came after Pompeo flew to Pyongyang in October to meet with Kim Jong Un. North Korea has not conducted a nuclear test since September 2017, but U.S. experts think the country continues to produce fissile material. The country has an estimated 30 to 60 nuclear warheads and might have a ballistic missile capable of hitting the United States. It has also continued to develop its ballistic missile program at hidden bases.

Trump, however, said at a political rally in September that he and Kim “fell in love” during their June meeting.

When asked Tuesday about that remark, Bolton said it appeared the two leaders had bonded.

Bolton added that the United States remained committed to a diplomatic route with North Korea, despite setbacks.

“Look, we’re going to pursue this,” he said. “If the North Koreans follow through on the commitments they made in Singapore, President Trump will deserve the Nobel Peace Prize. He opened a door for them. Now they have to walk through it. That’s what we hope to make progress on at the next meeting.”