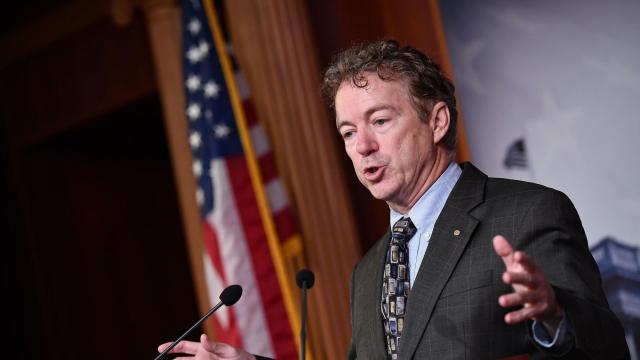 CNN — President Donald Trump instructed House members and Attorney General William Barr to try to reach a deal on some reforms to a critical national security surveillance law before a March 15 deadline when the authorities lapse, according to a source in the meeting.

Trump and Barr met Tuesday at the White House with a group of key Republicans who are feuding over the future of the law.

After meeting with Trump, Barr huddled privately with the lawmakers, the source said.

Senate Majority Leader Mitch McConnell and House Minority Leader Kevin McCarthy attended the meeting, as did a group of conservative lawmakers who have been pushing for major changes. Barr has angled to protect the program.

Factions within both parties have complicated legislative efforts to address the Foreign Intelligence Surveillance Act, heightening the possibility that some of the authorities under the law will expire later this month.

Sources with knowledge of the meeting said the President appeared sympathetic to the House members' arguments, and he left the meeting opposed to a clean reauthorization of the FISA law.

But there was opposition from senators, one of the sources said, as well as the Justice Department. Barr was at times frustrated with the House lawmakers, the source said.

Trump "made it abundantly clear that he will NOT accept a clean reauthorization of the Patriot Act without significant FISA reform! I agree with him!" tweeted Sen. Rand Paul of Kentucky, a Senate Republican also pushing for major changes to the law.

The next steps of the process may play out like this: Barr and House Republicans agree on changes and try to cut a deal with House Democrats, who themselves are divided over the balance between extending the authorities with protecting civil liberties. If the House reaches a bipartisan deal, the Senate could adopt that measure.

A short-term extension is still possible if this effort fails, the source said.

House Republicans argued their reforms would not undercut the core authorities of the law, but would provide more protections for people targeted by surveillance, including ensuring the proceedings in the secret court are transcribed and people are given appropriate access to records.

The domestic surveillance program has been the latest target of the President's years-long grudge against the FBI after the Justice Department's inspector general reported last year that investigators in the Russia probe had made errors in their warrant applications as they sought to wiretap Carter Page, a foreign policy adviser to the Trump campaign.

While the three provisions of the law scheduled to lapse on March 15 are prized by law enforcement and are separate from the ones used against Page, certain lawmakers have seized on the fight over their reauthorization as an opportunity to restructure the broader FISA system.

Paul, an advocate for civil liberties, said he would present Trump with a package of reforms at the meeting Tuesday that would block law enforcement from wiretapping Americans under FISA and would disable them from using information gathered through the system in criminal cases against Americans -- changes that would severely disrupt how the FBI investigates counterterrorism and espionage cases.

"I think that we should absolutely not reauthorize the Patriot Act without FISA reforms on it and the reforms that I'll put forward I'll present to the President this afternoon," Paul told reporters Tuesday ahead of the meeting, referencing the original post-9/11 security law that initiated some of the FISA provisions set to expire.

Trump has largely stayed quiet on the debate in public, but last week he told Paul and another GOP senator that he was supportive of their efforts to insert dramatic reform into upcoming legislation.

A spokesman for Sen. Mike Lee, a Utah Republican and another advocate for reform, said on Friday that the senator had had "very positive" phone calls with the President about the issue. Lee took part in the Tuesday meeting as well, the spokesman said Tuesday.

That puts Trump at odds with Barr, who has argued that the expiring provisions should simply be reauthorized, while more far-reaching changes could be explored in the coming months. Barr told a gathering of Republican senators last week that he could also make administrative fixes to the surveillance law from within the Justice Department in the meantime, according to several senators and a senior Justice Department official.

Sen. Lindsey Graham, the chairman of the Senate Judiciary Committee and another close confidant of the President's, has also called for the expiring provisions to be renewed. He had planned to speak with the president last weekend and told reporters on Tuesday that he was attending the White House meeting.

Senate Intelligence Chairman Richard Burr and the top Republicans on the House Intelligence and Judiciary Committees, Reps. Devin Nunes and Doug Collins, attended the Tuesday meeting, as did GOP Reps. Jim Jordan and Mark Meadows, according to people familiar with the matter.

Meanwhile, Democrats were also working Tuesday to overcome their own intraparty divide over FISA reauthorization.

House Intelligence Committee Chairman Adam Schiff said Tuesday morning that he is working with Reps. Zoe Lofgren and Pramila Jayapal, two liberal Democrats who favor broader reforms, to make changes to a bill that would address the expiring provisions.

The House Judiciary Committee had scheduled a hearing to review the legislation last week, but it was scuttled at the last minute after Lofgren said she would be proposing amendments to further reform the surveillance law.

This story has been updated with additional details from the meeting Tuesday.