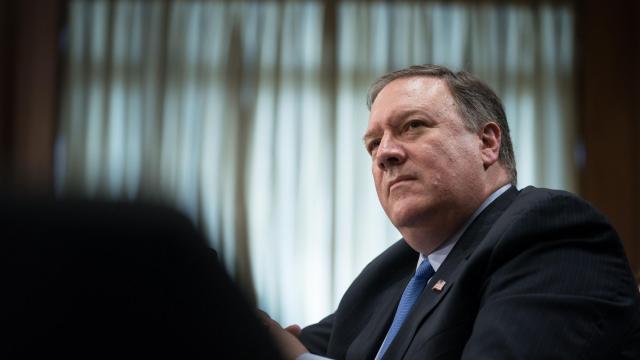 WASHINGTON — President Donald Trump plans to cap the number of refugees that can be resettled in the United States next year at 30,000, his administration announced Monday, further cutting an already drastically scaled-back program that offers protection to foreigners fleeing violence and persecution.

Secretary of State Mike Pompeo announced the limit at the State Department, saying it reflected the “daunting operational reality” of addressing what he called a “humanitarian crisis” involving people claiming asylum in the United States.

The number represents the lowest ceiling a president has placed on the refugee program since its creation in 1980, and a reduction of a third from the 45,000-person limit that Trump set for 2018.

The move is the latest in a series of efforts the president has made to clamp down on immigration to the United States, not only through cracking down on those who seek to enter the country illegally, but by making it more difficult to gain legal entry.

It is also the culmination of a quiet but successful effort by Stephen Miller, the president’s senior policy adviser, to severely restrict the number of refugees offered protection inside the country. As one piece of his broader push to narrow a variety of legal pathways for migrants to make their way into the United States, Miller had pressed for capping the program at as low as 25,000 people, according to people familiar with the discussions, who spoke on the condition of anonymity to describe internal deliberations.

Others inside the administration, including in the Defense Department and, initially, the State Department, had supported maintaining the 45,000-refugee ceiling, these people said.

Pompeo, who was pivotal to the decision, had privately argued in August for keeping the number where it was, they said. He kept his final recommendation for a deep cut under wraps until Monday afternoon, when he announced it from the Treaty Room of the State Department.

In doing so, he adopted an argument made privately by Miller: that the United States needed to prioritize hundreds of thousands of people who have arrived at the U.S. border, claiming a credible fear of returning home, rather than refugees overseas who have officially qualified as in need of protection and resettlement in another country.

“Some will characterize the refugee ceiling as the full barometer of America’s commitment to vulnerable people around the world,” Pompeo said. “This would be wrong.”

“This year’s refugee ceiling reflects the substantial increase in the number of individuals seeking asylum in our country, leading to a massive backlog of outstanding asylum cases and greater public expense,” he added.

Pompeo said refugees had to be weighed against a backlog of 800,000 asylum-seekers who are awaiting a decision by immigration officials about whether they qualify as in need of protection under U.S. law and will be granted status to remain.

But he vastly overstated the numbers, while making a linkage between two groups of immigrants that are not the same and are processed differently. As of the end of June, the Department of Homeland Security reported just under 320,000 people who had claimed asylum — meaning they had passed an interview conducted to verify that they met the “credible fear” threshold to be considered — and were awaiting a decision from the department about whether they could stay.

About 730,000 additional immigrants were waiting for their cases to be resolved by immigration courts, according to the Justice Department, including people who had asked for asylum after being apprehended. But that number also included people in deportation or other immigration proceedings. Those are not all “humanitarian protection cases,” as Pompeo described them; some may never be granted asylum, and some will be removed from the United States.

Immigrant and advocates condemned the cuts to the refugee program, calling it a callous decision that would also undermine U.S. national security and foreign policy priorities.

Nazanin Ash, vice president of policy and advocacy at the International Rescue Committee, accused the Trump administration of piling on after attacks on the U.S. asylum system, failing to protect unaccompanied minors at the border and withdrawing temporary protected status for Haitians, Salvadorans, Hondurans and others.

“This was an opportunity for the administration to show its humanitarian heart,” Ash said.

The cap does not require the Trump administration to resettle 30,000 refugees; in years past, governments have accepted far fewer than what is legally permitted.

During the administration of President George W. Bush, for example, the program’s ceiling accepted up to 70,000 refugees annually; it was raised to 80,000 during his final year in office. But the government resettled only about 27,000 refugees in 2002, immediately after the terrorist attacks of Sept. 11, 2001, and accepted 28,000 the following year. Trump, who campaigned promising a “Muslim ban,” and argued for a halt to the admission of Syrian refugees because he argued that they could be a danger to the country, has targeted the refugee resettlement program for cuts since his first days in office.

His travel ban, imposed a week after he was sworn in, temporarily halted the program and limited the number of refugees that could be resettled in the United States to 50,000. That slashed the program from the 110,000 cap that President Barack Obama had put in place before he left office.

Last year, Miller led an effort, with the support of John F. Kelly, the White House chief of staff, to cut the program even more, to as low as 15,000.

But pushback from Defense and State Department officials, as well as the Joint Chiefs of Staff and members of the U.S. mission to the United Nations, who advocated for maintaining the 50,000 level, resulted in a ceiling of 45,000.

Even then, the administration has managed to slow refugee admissions to a trickle, admitting only 20,918 this year — less than half the limit the president proposed.

“It is becoming increasingly clear that the goal of this White House is to cripple the U.S. refugee program,” said J. Kevin Appleby, senior director of international migration policy at the Center for Migration Studies.

“Not only do they reduce the number to record-low levels, they have no intention of even meeting that number during the fiscal year,” he said. “It further weakens our moral authority and leadership in the world.”

Pompeo said the reduced cap was a security imperative, resurrecting Trump’s original argument for shutting down the program, and suggested that the slower pace of admissions was due to the extra vetting the administration put in place when it restarted the refugee program in fall 2017.

“We must continue to responsibly vet applicants to prevent the entry of those who might do harm to our country,” Pompeo said. “The American people must have complete confidence that everyone granted resettlement in our country is thoroughly vetted. The security checks take time, but they’re critical.”

He cited the case of an Iraqi refugee arrested in California in August who prosecutors said was a member of the Islamic State wanted for murder in Iraq. The man entered the United States in 2014, years before the Trump administration tightened vetting procedures.