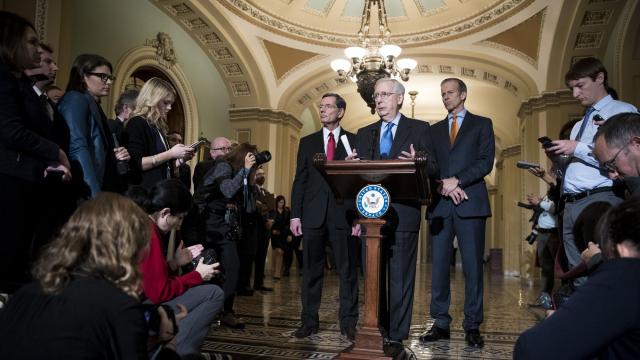 \WASHINGTON — President Donald Trump told House Republican leaders Tuesday that Congress must accede to his demand to include $5 billion for a southern border wall in a hefty year-end spending bill, intensifying a fight over one of his signature campaign promises that could lead to a partial government shutdown next week.

With less than 10 working days to wrestle out the details of an anticipated seven-bill spending package and deliver a measure to the president’s desk, Democrats have shown little sign of giving in to Trump’s demands. But House Republican leaders said after a private White House meeting that Trump would not back down, and sought to turn Democrats’ opposition against them.

“Are they going to shut down the government because they don’t want to keep America safe?” Rep. Steve Scalise of Louisiana, the No. 3 House Republican, told reporters outside the West Wing. “I think that’s a question a lot of Democrats are going to be answering very soon.”

Some signs of the potential for a deal remained. In an interview with The Washington Post published after the meeting, Trump signaled a willingness to compromise with Democrats, who oppose the construction of a concrete barrier, saying, “I might get it done another way.” And the president has made similar threats over wall funding before, only to back down.

Democrats, for their part, have long contended that they have no objections to strengthening border security — including reinforcing existing fences — but instead object to the physical structure Trump has spent years describing on the campaign trail.

Sen. Richard C. Shelby, R-Ala., the chairman of the Appropriations Committee, floated the possibility of providing the $5 billion in funding demanded by the president, but dividing the amount over two years.

But Sen. Chuck Schumer of New York, the minority leader, said Democrats would stick to a deal they negotiated with Republicans this year to spend $1.6 billion on border security, adding that Trump would bear responsibility for any lapse in government operations. Democratic votes are needed to cross the 60-vote threshold for spending bills in the Senate.

“If there’s any shutdown, it’s on President Trump’s back,” he told reporters at the Capitol.

“We’re not negotiating in the press,” he added. “This is our position.”

Faced with that Democratic opposition, senior House and Senate officials said they were now resigned to the likelihood that if they could not find a way to garner bipartisan support for the money, there would be a partial government shutdown as early as Dec. 7.

Negotiations have been further complicated by the presence of thousands of Central American migrants on the border between Mexico and the United States. After the migrants tried to evade a police blockade and rush across the border, Border Patrol agents fired tear gas on the group — including women and children — to force them to turn back.

The altercation has hardened stances on both sides of the debate, fueling Democrats’ outrage over the use of force and solidifying Republicans’ argument that Trump’s promise of a wall was vital to his pledge to protect the country — and that Democrats are standing in the way.

“Our Democratic colleagues seem to come up with a lot of criticism, but have no answer when you ask the question, ‘What are we supposed to do about people breaking through barricades, mobs of people coming into our country illegally and not following the rules?’” Sen. John Cornyn of Texas, the majority whip, said during a weekly leadership conference.

Still, it has been Trump who has spoiled for a shutdown fight over the wall for more than a year, saying last year that a “good shutdown” might be needed to bring Congress to heel on the issue, and telling reporters this month that “this would be a very good time to do a shutdown.”

As the impasse continued, lawmakers on both sides of the Capitol were also contemplating resurrecting the long-abandoned idea of a deal in which Democrats would agree to Trump’s wall-funding demands in exchange for a pathway to legal status for a group of young immigrants who were brought to the United States illegally as children.

“I think there’s easily a deal to be made there on the border wall and DACA, if people want to make it,” Sen. Roy Blunt, R-Mo., said Tuesday.

The president sought to strike such a trade last year with Democratic congressional leaders after he rescinded Deferred Action for Childhood Arrivals, or DACA, a program President Barack Obama created in 2012 to shield the young immigrants from deportation and grant them work permits. But it collapsed after months of haggling, with Republicans insisting it must be accompanied by stricter immigration measures and Democrats split on agreeing to any such compromise.

In his Post interview Tuesday, Trump said he felt that the issue would ultimately be decided by the Supreme Court.

Lawmakers say the border wall and border security remain the linchpin in the spending debate. But a figure for disaster relief for the horrific fires and storms that have ravaged parts of the country has yet to be decided, and a few other issues may emerge as points of contention for Democratic lawmakers.

They include an amendment that would effectively block funding for a citizenship question on the 2020 census, according to a House Democratic aide, and recurring efforts to find a vehicle for a bill that would protect the special counsel, Robert Mueller, and his investigation. In another instance of maneuvering, Democrats said they were blindsided late Monday night when Rep. Kevin Brady, R-Texas, the chairman of the powerful Ways and Means Committee, unveiled a 297-page tax package that includes a number of extensions for tax provisions, technical fixes to the 2017 tax overhaul and temporary exemptions for those in disaster areas.

But speaking to reporters, Brady argued that several of the fixes were derived from measures that originally had Democratic co-sponsors and bipartisan support.

“If the Republicans and Democrats are serious about working together to govern, this could be a good example,” he said, calling the package a “noncontroversial thing.”

A version of the bill could be brought to the floor as soon as this week, Brady said. But like many of the legislative endeavors percolating in the final weeks of the session, it is unclear if the bill will get the support it needs in both chambers.