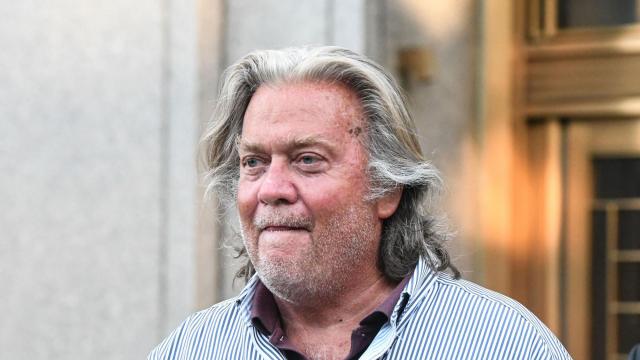 CNN — President Donald Trump pardoned his former chief strategist Steve Bannon, in a last-minute decision made only hours before he is scheduled to depart the White House for a final time.

Trump told people that after much deliberation, he had decided to pardon Bannon as one of his final acts in office.

"President Trump granted a full pardon to Stephen Bannon. Prosecutors pursued Mr. Bannon with charges related to fraud stemming from his involvement in a political project," the statement from White House press secretary Kayleigh McEnany read. "Mr. Bannon has been an important leader in the conservative movement and is known for his political acumen."

Bannon faces a federal case that began in August when New York federal prosecutors charged him and three others with defrauding donors of more than a million dollars as part of a fundraising campaign purportedly aimed at supporting Trump's border wall.

Bannon's pardon would follow a frantic scramble during the President's final hours in office as attorneys and top aides debated his inclusion on Trump's outgoing clemency list. Despite their falling out in recent years, Trump was eager to pardon his former aide after recently reconnecting with him as he helped fan Trump's conspiracy theories about the election.

It was a far cry from when Trump exiled Bannon from his inner circle after he was quoted in a book trashing the President's children, claiming that Donald Trump Jr. had been "treasonous" by meeting with a Russian attorney and labeling Ivanka Trump "dumb as a brick." Those statements from Bannon drove Trump to issue a lengthy statement saying he had "lost his mind."

"Steve Bannon has nothing to do with me or my presidency," Trump said at the time.

Things shifted in recent months as Bannon attempted to breach Trump's inner circle once again by offering advice before the election and pushing his false theories after Trump had lost.

One concern that had stalled debate over the pardon was Bannon's possible connection to the riot of Trump supporters at the US Capitol earlier this month, a source familiar with the discussions told CNN.

"All hell is going to break loose tomorrow," Bannon promised listeners of his podcast -- "War Room" -- on January 5, the day before the deadly siege on the Capitol.

The day after Bannon's comments, Trump urged supporters to go to the Capitol because the election "was stolen from you, from me and from the country."

The pardon would bring a quick end to his criminal case, which began in August when New York federal prosecutors charged him and three others with defrauding donors of more than a million dollars as part of a fundraising campaign purportedly aimed at supporting Trump's border wall.

Bannon's pardon would trigger relief from a series of charges brought against him by New York federal prosecutors, which carried the risk of jail time. Bannon had been released on $5 million bond in August, secured by $1.75 million in cash or real property. As part of his bail conditions, he was prohibited from travel on private airplanes, yachts or boats without permission from the court.

The four men were accused of allegedly using hundreds of thousands of dollars donated to an online crowdfunding campaign called We Build the Wall for personal expenses, among other things.

Bannon and another defendant, Brian Kolfage, allegedly promised donors that the campaign, which raised more than $25 million, was "a volunteer organization" and that "100% of the funds raised ... will be used in the execution of our mission and purpose," according to the indictment.

Instead, according to prosecutors, Bannon, through a nonprofit under his control, allegedly used more than $1 million from We Build the Wall to "secretly" pay Kolfage and cover hundreds of thousands of dollars in Bannon's personal expenses.

Through his counsel, Bannon pleaded not guilty, and he dismissed the charges after his initial court appearance as a "fiasco" intended to "stop people who want to build the wall."

Trump said at the time that he felt "very badly" for Bannon, who had been an enormously influential voice inside the White House before he was ousted by the President in August 2017.

A senior Trump adviser told CNN that Trump and Bannon had communicated in recent weeks.

Bannon had helped run Trump's 2016 presidential campaign and was credited as a driving force behind Trump's populist appeal, nationalist ideology and controversial policies.

Before joining the campaign, Bannon was the executive chairman of Breitbart, a right-wing news site that traffics in incendiary headlines. He returned to Breitbart after leaving the White House, but left again in 2018.

Among Trump's pardons earlier in his term were those for former Arizona Sheriff Joe Arpaio, right-wing commentator Dinesh D'Souza and financier Michael Milken.

This story has been updated with further developments.